So, every now and then, I take down one of my paintings I’ve been looking critically at for a while, and start making changes. The concept ‘finished’ doesn’t seem to apply to paintings… always something will express itself (unless, unusually, someone’s bought something, or the work was a commission…) 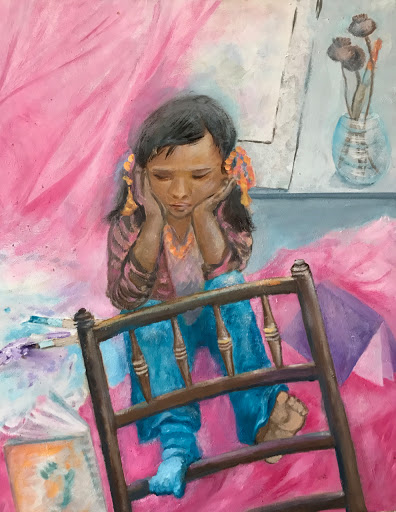 Daze was definitely awaiting more insight for makeover. Daze - Daisy to her parents on her birth-day - a character in my Mullins Family novels - rapidly found her way into being the third most important of the main characters: probably unknowingly destined from the get-go, since on page one (of first draft) we find Daze and Jenny (whose career-and-love story this was back then) as nine year olds. The girls, schoolbags thrown aside on the grass, are lying naughtily on their bellies in the garden of a doctor’s surgery, looking down into what used to be called ‘the area’ of a large converted house, and peeking through a semi-basement window as Jenny’s mother examines a patient… From the resulting scene, any editor would see that this Jenny/Daze thing is potentially explosive - and of course as becoming step-sisters it’s never going to work…

Neither was beginning the story nine years too early… ‘murder your darlings’ - (not my favourite expression, for its romantic sound rather than for the editing process, which is often right about ditching stuff ) - put paid to the first three chapters, and Daze in her place. Only to return, sassy and pregnant, to take up her central, necessary, role in someone else’s research and romance.

Do characters simply ‘turn up’ in our writing, unbid? Do they whisper in our ears, appear in our dreams? Have they lives of their own? It’s a lovely myth, a cosy story, one way to wrap up the phenomenon of finding yourself seeing ahead into an unexpected member of the cast. Like giving Bill the Lizard a more than walk-on part in Alice in Wonderland. Bill petitions the Queen of Hearts to execute Alice for kicking him up and out through the chimney, resulting in a disability which leaves him unable to work. We move to the trial scene… But Carroll (if tempted) didn’t - he kept on with Alice’s adventures, and she escaped the consequences…

On the other hand, a character with potential can sometimes prompt ways in which the plot can be worked out including more of their own appearances and effects upon the twists and turns… as with Daze. As I thought about how this fiery child, filled with resentment that her mother had abandoned her and now her dad had shacked up with the local GP whose daughter Jenny was the bright star (or uppity geek) of the class, Daze’s progress through further escapades and tragedy, the kindness of others, and picking herself up to go on, could enliven the telling.

How about other writerly myths?  Do you dismiss them, believe them, act them out, recognise yourself? Do you buy beautiful notebooks, have a special pen, love words, procrastinate, put yourself or your friends/enemies/siblings in your novels, dialogue with your characters?

(You can read that little bit of backstory at the Hodge website: go to https://hodgepublishing.co.uk/extract/a-little-bit-of-backstory-jenny-and-daze-age-9-1-2/

(or if you begin on the landing page of Hodge, click through from the 'read an extract' boxes and find the extract under The Labyrinth Year extract about Christmas)

'how to write a novel' #howIwrite writers and their characters

Sandra Horn said…
Fascinating, isn't it, how a character you thought you'd invented (and therefore could control presumably)takes on a life you hadn't consciously thought of. I don't understand it but I love it.
Congratulations!
22 August 2020 at 15:52

I don't tend to believe in writerly myths to help me write, but I do love notebooks (have many) and love words. Perhaps myths are more about creating the scene to be able to write.