Well, we’ve only been and gorn and done it. Created my ‘first collection’ book of poems, that is. In the oddness that is lockdown time, which has a curious mañana-ish feel to it, since there’s always tomorrow when days are less full, we have, nevertheless, collated, corrected, re-corrected (me), typeset (Niall), reset several times (sorry Niall), created a cover (Niall) and proof-read twice, so far (me). I think we’re nearly there. I was surprised to find that there are just over 70 poems, some very short, gathered together from my inimitable filing system – i.e. they are all over the place in my Word docs. One or two are over a page long and I wanted the overlap to be on the facing page, which gave Niall a few challenges. 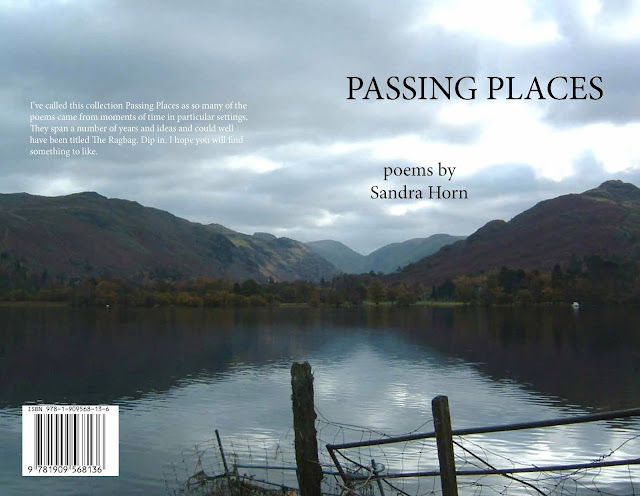 It has taken a long time for me to gird my loins and get over the twin shackles of impostor syndrome and ‘not good enough’. I’ve written poetry for as long as I can remember and, although I know that one editor’s acceptance is another’s in-the-bin, I still crawl into a hole if something I’ve dared to submit to a publisher or competition (silly word for this) doesn’t get taken – even when, as recently, there were 1,500 other submissions. Why send work in at all? Because we all need feedback, and acceptance is just that – OK, so I’ve just said one editor’s acceptance, etc. Hmm. Perhaps seeing it ‘out there’ is some kind of validation? Anyway, I’ve stopped sending out, for now at least, and have concentrated on gathering in instead. The result is ‘Passing Places’.

In the course of putting it all together, it became more and more personal. I don’t just mean the poems, some of which are personal indeed, but the process of making it into a book, so we are going to publish it ourselves, using the Clucket Press imprint for probably the last time. I couldn’t face making changes because someone else wanted them and didn’t understand why it was important to write it as I had. In my picture book days, I did as I was asked and sometimes regretted it afterwards. For better or worse, this book is how I meant it to be – not to be arrogant, I hope, but simply because it IS personal. Also, it is very much a joint effort and that has been important. The cover was created by Niall from a photograph he took when we were walking by Ullswater and is full of memories.

We’ve all seen ill-advised D.I.Y. books – I hope this isn’t one! I have had the huge benefit of feedback on some or all of it from fellow writers, notably the inestimable Frances Thomas, and from Helena Nelson at Happenstance Press, Shirley Bell the then-editor at The Blue Nib, and from the Live Canon team, and that has been a great confidence-boost – and I think it has also given me permission to let it ‘be.’ Oh yeuch! This is so bloody hard to write about without sounding like a complete soggy saddo!  Right. It’s just a ragbag book of poems. It won’t have that bio bit – ‘Sandra Horn is, etc.’ because that would somehow give it an impersonal touch, or so it felt when I came to write it, so I took it back out. It won't go on Amazon but we’ve used up one of our spare Clucket Press isbn numbers on it, so it will go to Nielsen, inevitably, but its main purpose is as a gift from me to friends, so there’s no marketing strategy, no trying for book-signing gigs, etc. All I know at present is that I will buy a boxful and send it out to people I care about and who might like it, and some family members, like it or not, because they are family and will be hurt if I don’t (and some will be very puzzled when I do!). I won’t push it on friends if I know they don’t ‘get’ poetry, but I’ll give it to anyone who does want it.

Pretentiousness Alert: I read once that if you give a gift of jade to someone you should first wear it for a while so that it absorbs some of your soul. Then the gift is from you and of you. That’s it, exactly.

Jan Needle said…
Great stuff, and congratulations Sandra. I'd love a copy if possible. I'd love a Niall as well. Sounds very useful!
20 August 2020 at 11:08

Peter Leyland said…
Oh this is really good Sandra, a great story of how you went for it and succeeded on your own terms. I love poetry.

I did once self publish a book on Detective Fiction and everyone helped, family and friends. It was never on Amazon but I gave it away on my courses and once or twice did a sale - great fun!
20 August 2020 at 14:23

Umberto Tosi said…
Congratulations and all the best for Passing Places! I look forward to reading this work.
20 August 2020 at 18:26

Clare Weiner (Mari Howard) said…
Good idea, Sandra! Too often we writers hide our poetry away on our computers... (always call myself 'not a proper writer - and no, not a poet!' I love your piece about how you put the book together, the willing and wonderful helper, etc - so difficult to decide to publish poetry, as it's often such a personal take on life, and comes from rather deep compared to, say, a novel. You also give me a bit more courage to share about mine sometime - published last year but not widely promoted.
20 August 2020 at 19:23