By Cecilia Peartree - August 05, 2020
Thanks to Jo Carroll for reminding me in her recent post that travel still exists!
Almost every year on the 7th of June, Facebook helpfully prompts me to remember the night I unexpectedly spent in the Comfort Hotel, Malmo, on that date in 2014. I don't really need a reminder of it, not because it was a terrible hotel - on the contrary, it was one of the most friendly and welcoming places I've ever stayed in - but because of the effort involved in getting there and the fact that I hadn't intended to spend the night there at all but in Stockholm. 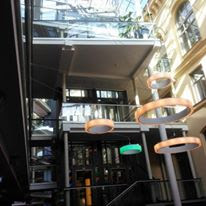 I'm not going to go into all the horrid detail here, but while still in transit to Helsinki, my ultimate destination, I wrote a live blog, with much ranting about how awful the train company Deutsche Bahn was and why I couldn't decide whether I hated it more or less than Virgin Trains. I will post a link to my trains blog at the end of this post for anyone who is interested.
I have fond memories of the Comfort Hotel. I walked into it at the end of a long day's journey, which had begun at Cologne at five o'clock in the morning, and which had involved consuming a breakfast of cheese, mayonnaise and gherkin sandwiches and luke-warm Coca Cola - I couldn't even get hold of a coffee until after I had changed trains in Hamburg - then a bit later on watching with incredulity and mild panic as the train drove on board a ferry somewhere in Denmark to cross a stretch of water that was in the way, and then some time later sitting for an hour or two just outside a station in a state of gradually increasing anxiety after that same train had broken down and it became more and more certain that I would miss my connection in Copenhagen..
Looking back on this whole experience, I am quite surprised I even found my way to the Comfort Hotel, although it isn't all that far from Copenhagen as the crow flies. There was a coach from Copenhagen airport across the Oresundsbroen, a drop-off point somewhere on the outskirts of Malmo, then rather vague directions about what train to catch from there and what stop to get off at. I just kept going regardless, although I had to make an effort to stifle the panic that was threatening to overwhelm me.
I suppose the breakdown of the train must have been a fairly unusual occurrence. When I explained to the staff at the Comfort Hotel why I needed a room for the night so urgently, they just nodded and said, 'We heard about that.'
The journey improved vastly from there. As well as the other comforts provided by the Comfort Hotel, including an excellent restaurant with the obligatory tall blond Swedish waiters, there was very good wi-fi and I was able to use that in conjunction with my Kindle Fire to re-book my ferry crossing from Stockholm to Helsinki, which resulted in a dramatic arrival just across the harbour from the conference centre where I was due to give a presentation - not that same day, fortunately, but the following one. 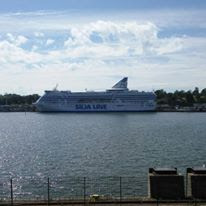 Too late, I wished I had taken more notice of the routes suggested by the Man in Seat 61. Instead I had foolishly invented my own route, pinning all my hopes on the feasibility of getting from Cologne to Stockholm in one day despite the three changes of train that were involved.
One of several railway companies I follow on Twitter is Eurostar, because I haven't yet given up hope of some day being able to go on my 'retirement trip' down the Rhine and through the Alps by train. I noticed recently they had started up again after a break enforced by the pandemic, and only last week I saw a post from the Man in Seat 61 about travelling across Germany by train. Following on from that, there was news of some new proposed overnight routes, and I was extremely happy to see that one of them is from Brussels to Malmo. The news opened up the possibility of another, more relaxed trip to Sweden and/or Finland at some future time.
My trains blog here (scroll down the June 2014 page for the Finland section): https://allmytrains.wordpress.com/2014/06/
Just the pictures: https://www.flickr.com/photos/sheilamcperry/sets/72157644868401707
The Man in Seat 61 here: www.seat61.com

Peter Leyland said…
Ah journeys, what a great subject for writing about. Thanks for this.
5 August 2020 at 11:01

Umberto Tosi said…
Every journey is an adventure, but not everyone can write it up that way. I enjoyed reading this, though it sounded tough on you. Thanks.
5 August 2020 at 22:44

JO said…
Ah ... travelling! How we miss it. I spent a week in Malmo, years ago, as we had friends working there. It was late February are there were ice floes in the Baltic. We walked along the water’s edge, in boots, and of course one of the children fell over in the sea. One of the family stories now, but she didn’t think it was very funny at the time.
6 August 2020 at 11:16