AE blogs are a treat and, quite often, thought-provoking, as Bill Kirton’s last one about where ideas come from. It’s a topic I’ve used before about my picture books, but this is about now and chain reactions. I woke up the other morning thinking about my Great-aunt Scilla – christened Priscilla but known as Setfire by her sister, my lovely Nan, because she couldn’t pronounce Priscilla and Setfire was the nearest she could get. It turned out to be prophetic; Scilla’s habitual stance towards other people was condemnatory, or so it seemed to me. I later learned from Nan, who had birthed and brought up eight children and also housed Grandad’s parents and his six brothers until they married and moved on, that Scilla had had an illegitimate child and given him up for adoption. She might have had no choice in the matter – this was West Cornwall in the early 1900s – but hers was a soured and solitary life thereafter.

I don’t know why Scilla popped into my head as I woke that morning. I’d been having a long fallow period of writing after the first lockdown, when we had put Passing Places together, and had been feeling foggy in the head – always a worry at my age – but out of the blue came the start of a poem; the true story of Scilla, Lily and a thunderstorm when we (Mum and I were staying in St Just-in-Penwith and witnessed one of those incredibly noisy and dramatic storms right overhead, one night. It had caused Lily to panic, wrap herself in her bedsheet and run across the road to Scilla’s cottage, hammering on the door and hiding under Scilla’s table until the storm had passed. The next morning, Scilla was loud in her denunciation of Lily, predicting that she was ‘bound for Bodmin’ (the old asylum up on the moor).

Remembering it made me think of another true story; my Great-gran and thunderstorms. Whenever the first rumble of thunder was heard, lights were switched off, the mirror over the sideboard covered with a sheet, cutlery put away, everything electric unplugged, all ordered by Great-gran. We didn’t dare to contradict her or disobey. Another one of her strictures, repeated often, was never to stand under a tree in a storm.  This took me to the gravestone in Southampton’s Old Cemetery which commemorates a lad killed by lightning in 1955 while sheltering with two friends under an oak tree.  The grave is right by the path and is tended to this day, fresh flowers always on it, in contrast to the toppled stones and overgrown graves around it.

These three stories are now the start of a sequence of storm poems, followed by another Sussex memory of apparently silent lightning over the Downs, two encounters with troubled seas in the aftermath of storms unseen, a naming of some of the gods of thunder and lightning – never mind Thor and Zeus, what about Taranis, Adad, Lei gong, Yopaat, Chaac, Cojico and all their ilk? This is more fun than I’ve had in ages.

I’m not sure where this will take me, but I next felt compelled to look up the Beaufort Scale in relation to the Great Storm, which we slept through and knew nothing of until Niall cycled across the Common to go to work and phoned me in a state of shock to tell me that all the trees were toppled over like matchsticks. By chance, the first tutorial in a poetry course I’ve signed up to, Live Canon’s Writing Science, invited participants to quantify things not normally given numerical ‘scores’ – love, grief, rage, etc. and I’ve been attempting to fit rage onto the Beaufort Scale. More fun.

And last (or at least, latest) to a cherished book, which is twinkling at me from my desk as I write: Rain later, Good: painting the shipping forecast by Peter Collyer. The art is stunning and the text as beguiling as the shipping forecast itself, that melodic, mesmeric daily recital of the poetically-named sea areas. It seems to have been fixed for all time, but in fact Viking was added at the beginning in 1952, and then the North and South Utsires, which I resented as unpoetic – and couldn’t begin to think how they could be spelled. At some point, Heligoland, Ronaldsway and Dowsing were lost and the order changed. I miss Heligoland badly, but not as much as Finisterre, which was sacrificed to allow Fitzroy, the forecast’s originator, to be given his due. I think this will need to be put into a poem too. 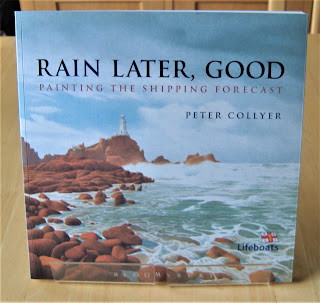 So there it is: a sudden, out-of-the-blue memory of my Great-aunt Scilla and poems start springing up all over the place, but as to why? I’m none the wiser.

It confirms the mind has unlimited potential, so long as we're able to keep it active.

Jan Needle said…
Good that, Sandra, thanks.My problem with the Scale(predatng the loss of Heligoland) is the fact that I could never remember the mph of each one. Bizarrely fascinating, theoretically important!
20 January 2021 at 12:37

Penny Dolan said…
I miss the charm, mystery and romance of "Finisterre" too, Sandra.

Julia jones said…
Absolutely excellent post - thoughts running in all directions, like cats paws presaging a storm. But let me put a word in for Fitzroy who finally killed himself in despair at the stingy official attitude to his weather forecasting service, despite the fact it was saving fishermen's lives... I think he deserves commemoration even more than a nasty Spanish headland...

Sandra Horn said…
Thank you folks - dear Julia, I think we could spare German Bight or Sole to honour Fitzroy, who certainly deserves recognition and acclaim. It's the romance and musical sound of Finisterre I miss.

Maressa Mortimer said…
I love how things can pop up in our mind, taking us places! Thanks for sharing!
23 January 2021 at 10:28

Reb MacRath said…
Great post, Sandra, a reminder that the Muse can better serve us with thoughts that we don't try to own. Let them come and do their thing, assembling as they please.
24 January 2021 at 02:47