In the couple of weeks leadig up to Christmas, I had a sit-down (virtually, of course) with some writer friends, and we spent quite a lot of time discussing the mechanics of writing. All of us have have recently been working with new writers, trying to help them, and someone (not me, wish I could take the credit for it) thought it would be an idea to get a set of guidelines and tips together, based on things we'd seen and questions we'd had. (Yes, the inevitable question was asked – how do you write a book? My answer was the same as, I suspect, most authors – one word at a time, until you have a lot of them that hopefully forms a coherent text.)
What was interesting, though, was the views of some people on the whole process. We started the process of collating this material, but the following is the top 4 things that came up:

'The flashlights swept the darkened floor of the warehouse, illuminating stained patches of concrete for a moment before moving on. Crouched behind a stack of packing crates, Tom looked at Ben and mouthed, "We need to get out of here, now." Ben nodded, his expression grim.'
Not the greatest piece of prose written, but it does, I think, illustrate the point. It doesn't say, 'Tom whispered,' or even 'Tom said,' because there is no need. Tom and Ben are hiding and clearly being hunted; the reader can infer the words were uttered quietly. Also, it visually indicates Tom 'mouthed' the words – another indicator.

4."My story is shorter than was asked for; I'll add some padding." This is a very bad idea and any editor will see through it immediately. Usually, the opposite occurs – your first draft is too long, and subsequent rewrites allow you to prune the word-count back. I once sold a story to an anthology where the max length was 2,000 words, The first draft came in at a shade under 3,000 words, but a couple of rewrites later it was down to the required length and was a better story for it – tighter, more fast-moving and definitely more engaging. Do not, under any circumstances, pad your work just to meet a word count. If a story isn't the right length, adding unnecessary words isn't going to help. Remember, some stories don't need a glut of words to be told.

Peter Leyland said…
Interesting post about the mechanics of writing Neil. Although I know it is about fiction, it can be applied to the autobiographical writing style that I'm trying to develop, especially about avoiding ambiguity, first drafts and so on. Thanks for the suggestions.
8 January 2021 at 09:59

Griselda Heppel said…
Were these points made by your writing friends, or the new writers you are all working with? I do hope the latter because they show the writers have a LOOOOOOONG way to go. The first point is interesting because it's OK not to edit while you're getting the story down - you do need creative flow for that. But yes, your suggestions for drafting and redrafting are crucial! A wonderful video made by prizewinning children's author S F Said shows exactly why https://www.youtube.com/watch?v=0wV2et5Q-tU&feature=emb_title

And the other 3 points - yup. Replacing 'said' with other speech words is one of the most cringemaking rookie errors, I aver.

Neil McGowan said…
Thanks Peter, I hadn't thought about how this could apply to non-fiction before. Griselda, yes, these are new writers (mostly - one isn't, but that could form a whole blog...)
I've made all these errors myself, and wish someone had pointed them out to me, so really happy if it helps someone else. Great YouTube link, by the way
8 January 2021 at 21:16

Reb MacRath said…
I'm with you on almost all points Neil. My reservations arise from pojnt 3 on attribution. It doesn't bother me all when it's done simply, without bells and whistles: a clean 's/he said' as opposed to 's/he responded' or 's/he opined.'

That said, I do think a bit of guidaance now and then can be a good think. Occasional stage directions--such as 's/he growled; or 's/he roared'--can bring a scene to life.

But in general I do agree that active stage direction--Beth lowered eyes or John pounded on the table--can effectively take the place of attribution.

Nothing, including any writing rule, to excess?

Writing guidelines are good to have, as are resources such as dictionaries, thesauruses, editing tips, etc.

Still, this all assumes one knows the basics of writing. More than anything else, it's important to actually write.

We cannot know what we don't know unless someone points it out to us. And they can only do this if they see a written piece.

Talking about writing is merely an intellectual exercise, and one of the reasons I hate talking to other writers about the "craft of writing." Kidding, sort of... ;) 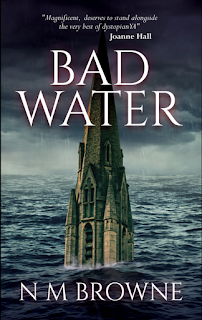 So, this blog was going to be the sad end of year reflection on a year of Covid, of the last year in which all of Europe was still  ours to explore at will. I went to Paris at the end of February as the world woke up to virus and I went to Venice post Covid in the early summer when, briefly, the world opened up again: memories to hold on to.  This year has been about hanging on. I wrote a poem everyday through lockdown - hanging on to creativity and small pleasures: the birdsong in the garden, sunlight striping the floor, walks with a friend and wine -  probably too much wine. This year has been about hanging on to connections, contriving safe ways to meet family and friends. We hung on to Christmas by having it outdoors in November in a festive gazebo. I have decided to hang on to  59, though my transition into young old age was marked memorably and well with a walk in the park and champagne, I think I'll celebrate it again next year - when I may be able to see more than one pers
Read more 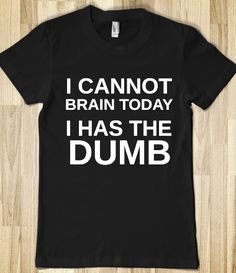 I'd have had a different headline--one loved by my friend Stupid--if I'd placed a comma after the word 'friend'. But Savvy, my other friend, came to the rescue. The two are seldom far apart. Savvy has his moments and has served me well through the years.  A few of Savvy's strengths and achievements: --A small rainbow of belts in martial arts, Hapkido and Aikido, before my back retired me, gave me physical confidence and serve as a motherlode for fight scenes in my books. --Street smarts acquired through life in a half-dozen big cities and retail acquaintance with scoundrels and thieves of all sorts. --Copywriting and journalistic experience --Stoker Award for best first novel. --Moving experience gained from a half-dozen cross-country moves. --Writing, proofreading, and editing experience gained from a dozen published novels and an advertising background --From my classical studies, a passion for complex structure, brevity, and word play. --From my close study of
Read more 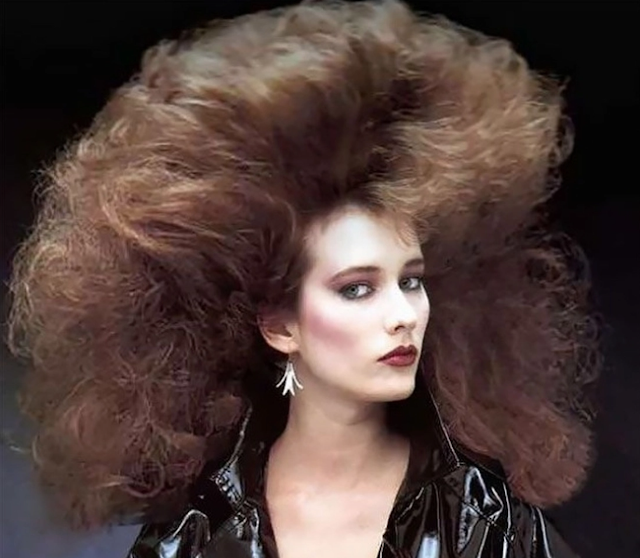 This is my first post of 2021 here, so I'd like to wish a Happy New Year to readers!  When I was thinking of a topic to write, I came across a post on a friend’s Facebook page that made me laugh.  The caption read: For the next time you think the 80s were cool.  Yeah, it was the decade of big hair and outlandish fashion.  The reason I found it funny was because I used to be a slave to fashion. My jeans had to sit above the waist, not below it. They couldn’t be too faded or too dark. They had to conform nicely around my butt and not cut off the circulation in my legs. I preferred the skinny fit over a baggy, loose pair, and if there were holes in them, they had to look as if they'd been ripped accidentally, not deliberately. The pressure of buying a pair of pants!  I wanted "the look" with Jordache jeans. Didn't we all? Looking back now, I pity my younger, insecure self. I was pretty shy in the eighties, and fashion gave me a sense of belonging. The eclectic style
Read more

The Snow Goose & the Dorrien Rose by Julia Jones 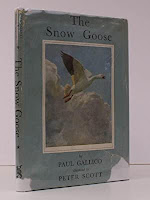 The Snow Goose 1946 In the autumn of 1940 the Saturday Evening Post in America published a short story, 'The Snow Goose' by Paul Gallico (1879-1976). It won the prestigious O. Henry short story prize and in 1941 was expanded into a novella, published in both the US and UK. It was hugely popular. Later it became a Golden Globe-winning film, a spoken word recording, an RCA record with words and music. More recently it's been represented as a touring puppet show and it's an acknowledged influence on Michael Morpurgo’s hugely successful novel War Horse .  For me, as a 1950s child, the story was accepted as truth and the most significant version was the book published in December 1946, with illustrations by Peter Scott. (I'm faintly shocked that there could be any others.) Our copy belonged to my mother but I appropriated it as soon as I could and have always treasured it. I never actually asked her whether she minded me removing it to my shelves -- or indeed how she fe
Read more

When writing the first blog of the year it always leaves me wondering what I should say. As this one falls on the 16th of the month all the usual New Year's Resolutions have been covered and most people are gazing in dismay at the bills from Christmas. Add in the added pressures of COVID (there I said it) and lockdown and it really leaves me wondering - what the heck can I do to make this better. Well, I'm a definite glass half full girl and a great believer in making lemonade from the lemons of life. So, I handed myself a challenge to think about what good has, or could, come out of this as a writer. So let's see what it's like on the bright side.  The first thing that has happened since last March and the first lockdown is that I have had to stay at home. When I say stay at home, I don't just mean inside my house, I mean no travel and all speaking engagements have had to be cancelled. Usually I spend many weeks of the year travelling which I love. However, it me
Read more