By now, you are probably wondering what my image is about. What does a comic tortoise have to do with inspiration? A lot it turns out. Let me educate you in the ways of the tortoise or this particular one. I first need to explain that another of our new bloggers, Ruth Leigh, received copies of her debut novel earlier in the week. She duly dispatched them in the post to those who were waiting, or so she said. I was a little sceptical as the book was never arriving in Scotland. I had glimpses of the book in the wild as other people received their copy, but mine was nowhere to be seen. I could only surmise that she had dispatched mine strapped to the back of a tortoise which she then pointed in the direction of Scotland. I said so in the Facebook group and much hilarity ensued.

What on earth has this got to do with inspiration I hear you ask. We are getting there. I took the idea one step further in a zoom chat and tossed the name Terry the Postie Tortoise into the ring. By today, when the book still hadn't arrived I had a feeling our brave hero, Terry, had stopped for a small holiday in the midlands and was enjoying a spot of pampering in the Spa. People are now writing stories about Terry and what he was/is doing while delivering books. He'll have a cult following soon.

This led me to thinking that Terry the Postie Tortoise would be a great idea for a children's picture book and might just pitch it to my long suffering publisher. Sarah Grace, if you're reading this - be forewarned. So, inspiration really does come from the strangest things. Don't be afraid to take your ideas and give them wings. make them zany, make them, wild, and run with them. Add another, idea and another and before you know where you are a book is born. Even Shakespeare started with wild ideas about Fairies.

What of the book you ask. Well, I'm delighted it has appeared and I am now the proud owner of The Diary of Isabella M. Smugge. I know it's going to be hysterical if Isabella's writer is anything to go by. I can't wait to read it the minute I've finished this blog post. Congratulations, Ruth and many thanks to Terry. If you'll excuse me, I've books to read and, of course, write. What on earth could Terry be up to now? You need to keep an eye on the wee chap. 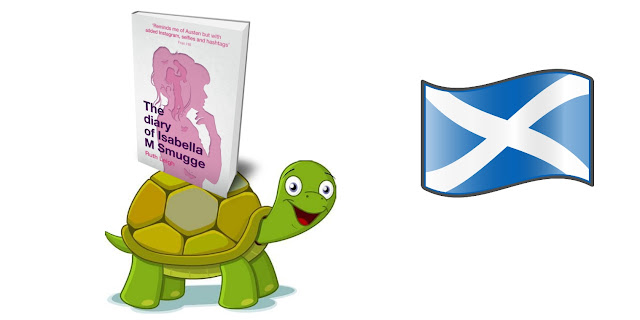 About the Author
Wendy H. Jones is an international best-selling author who writes adult crime books, young adult mysteries, children's picture books and non-fiction books for writers. She is also a writing and marketing coach, runs the Writing Matters Online School and is the CEO of Authorpreneur Accelerator Academy, The president of the Scottish Association of Writers and hosts the writing and marketing show podcast.

Our mail system has been strange of late too. My husband found some of his mail tossed behind trees near our house, like the delivery person completely missed depositing it in our mailbox. Or maybe she got fed up and just said "F#$% it, I'm done!"


I've been waiting for a small parcel for over 3 weeks now. The tracking says it's "on its way." I wonder if Terry has any connections in Canada. ;)

SC Skillman said…
Brilliant thought, Wendy. Ideas do come from the strangest places. In fact I don't think we need even worry about where the ideas come from and just leave that to annoying interviewers after our books are published.
30 January 2021 at 16:04

Ruth Leigh said…
Eden, I am happy to report that Terry's second cousin, Tyler, runs a very successful Reptile Postal Service in Canada (not including offshore islands). As a cold-blooded creature, he has no trouble with Canada's extreme weather
30 January 2021 at 19:08

Ruth Leigh said…
Wendy this is BRILLIANT! I am howling with laughter. I just called Mr Leigh in from the kitchen to show him Terry with Isabella strapped to his back. "Surely a harness would help?" he noted, peering at Terry and reading your final paragraph. I like the idea of a Terry the Tortoise series. Let me get to 19th February when the bookshops and online platforms can take the strain, and we'll chat about the wee fellow. Have I mentioned his Auntie Shelley, who actually founded the postal company in the first place? She took it over from Simone the Snail, of Snail Mail fame.
30 January 2021 at 19:10

Ruth Leigh said…
Don't forget the time difference, Eden. Tyler is a very friendly chap. I'm sure he'll be delighted to hear from you.
30 January 2021 at 19:35

Umberto Tosi said…
Thanks, Wendy. This is amusing and seriously on target. We face added delivery complications here in the USA due to former dictator-wannabe Don-the-Con Trump's having done his damndest to damage the U.S. Postal Service - to help private delivery companies and discourage mail-in voting. Ben Franklin's redoubtable postal service is like a bombed-out city right now -- machines wrecked, mailboxes scrapped. The damage he and his corrupt crony Postmaster De Joy have done will take a good while and some significant money to repair by a new administration already battling myriad scourges. But neither rain, nor sleet, nor dark of night shall keep this writer from his appointed rounds!
31 January 2021 at 01:35

Reb MacRath said…
Thanks, Wendy. I just received a Christmas card from Portland, postmarked December 17. But since you've already transformed such a delay into a wonderful post, I'm contenting myself with having received the card at all. In a way, it extended the holiday for another month, an exceptional gift in itself.
31 January 2021 at 23:56