A memory of Greenham by Sandra Horn

Recently, my daughter sent me the link to an article about the women of Greenham. I had never camped there, but had visited a few times for demonstrations and to show solidarity. I had three small children at the time and a husband working somewhat more than full-time, and would not have dreamed of leaving them. I remember an elderly Friend saying words to the effect that clean clothes and brushing teeth wouldn’t matter when the bomb went off. True, but until then, the small mundanities of life must go on, I thought. There were women at the camp who had left families behind; there was also some talk of women who had fled unhappy relationships. I don’t know about that. I just know that they were all much braver then I was, to uproot themselves and live in challenging (to say the least of it) conditions in order to bear witness to the evil of the base and protest against it loudly, disruptively and consistently. I honour them. I have one caveat: a young father took his children to the creche so that his wife could be a presence with the other women surrounding the fence. He was denied entry because he was a man. That has always rankled. Tarring all men with the same brush is not far from all Jews, Blacks, etc. Divisive and inhuman.

My daughter’s message with the link said ‘I’m so proud of you,’ but all I had done didn’t amount to much compared with the peace camp women – a few short days of joining with others to add weight of numbers and my voice. That’s all. On one occasion we tied things that were precious to us all along the fence – photos of loved ones, babies’ toys, bootees… to show what would be lost in a nuclear war. On another, mirrors were hung all along it, facing inwards, to reflect the evil back inside. There was always singing. On one Sunday morning, a bunch of Quakers found a flat, green spot to hold Meeting for Worship. We stood in a circle, holding hands and many of us closed our eyes. We opened them again smartly when we started to sink into the bog! Meeting ended in gales of laughter. One of my friends had gone to find a more conventional way of worship, or so she hoped. She could hear familiar hymn tunes and went to join in. She came back later rather pink in the face, to report that ‘they had changed the words and were referring to God as She.’ Unlike our bog adventure, she didn’t find it funny.

On the last occasion, I wasn’t with a group. A dear friend wanted to visit and hadn’t managed to up to then, so we went together. It was the day the fence came down, pulled and pushed by a vast chain of women until it was flat on the ground. The base had been breached. The women were jubilant. It was amazing and frightening and wonderful all at once. Now what?A mass invasion? No, just the demonstration of how vulnerable the place was to people determined to get in.

Diana, my friend, and I decided to walk the perimeter to see how far the destruction went. Every now and then, at long intervals, there was an armed soldier on the other side. We came across one who looked incredibly young. There were no others in sight. We smiled at him cheerily across the flattened fence. He muttered a bitter ‘Thank you.’ ‘Are you going to shoot us, then?’ we asked him, cockily. He didn’t answer. We walked on. That encounter has stuck with me all this time, by far my most vivid memory of Greenham. I’m not proud of it. My daughter’s message brought it into sharp relief once again. Predictably, I’m afraid, I wrote a poem about it. Writing does not exorcise bad feelings, but in revisiting a difficult episode and putting it into words, there is a certain measure of recognition, perhaps of late and misplaced apology. 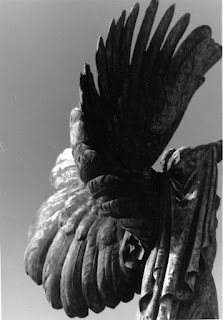 He was cradling it in his arms.

held against his chest.

awkward, unsure. How to keep it safe,

keep it away from harm?

Cradling it in the crook of his arm,

his other hand cupped underneath –

not loose, for fear of dropping it,

not tight, for fear of hurt.

his gaze flicking between us, back and forth,

as we drew level with him

across the shattered fence.

Cradling it as if it was too much,

too hard, too heavy, all at once –

as, if he could only put it down,

put the thing down and walk away,

he would.  But, a soldier, he could not.

‘Are you going to shoot us, then?’ we mocked.

Cradling the black weapon, he shifted it in his arms.

Was that a threat, or could he be afraid ?

He looked so young, alone,

Cradling the lethal thing, he gave us no reply

(so young and so alone he was, guarding the shattered fence)

while we stood mocking, from the other side,

so sure we were of safety. We would not be shot.

We were women, this was England, after all.

We were victorious and we were many.

He with his gun, defenceless.

I wish we had not mocked the lad.

Peter Leyland said…
Brilliant piece Sandra. A lot of us men were with you all then, even though we couldn't join in. We had grown up listening to Masters of War and A Hard Rain's a Gonna Fall and wondered why it was still going on. Greenham Common was fantastic. Thanks for the poem too.
20 September 2021 at 09:44

Jan Needle said…
I may have said this before, but never mind. Passing the peace women while driving south to Portsmouth from Manchester, I stopped and gave them 20 quid. When I mentioned it to my parents that evening – lifelong socialists and pacifists – they were horrified. Like the women, I was being grossly naive, they thought. Strangely, I gave the money because I felt sorry for them, standing in the rain, etc. Nowadays that would be considered merely sexist. Funny old times – but it looks as if we won!
20 September 2021 at 10:41

Joy Margetts said…
Amazing memories. I was too young to really understand what the Greenham women did, but can remember the tv news pictures, and the fear we all lived under of nuclear war. Looking back it seems like another world, but of course it isn't. Your poem is so evocative. Thanks for sharing.
20 September 2021 at 13:42

Reb MacRath said…
Great post with a profoundly moving poem. Thanks for sharing.
22 September 2021 at 21:50