And the winner is... by Joy Kluver

... not me, obviously! I didn't stand a chance against Richard Osman. He wasn't there so I couldn't even get a photo with him. And that trophy was whisked away quickly so any plans to steal it were thwarted. Not that there were any plans. Thoughts maybe but no actual plans. Still, it's a great honour to be nominated and on the plus side, I didn't have to lug home a heavy glass trophy.

Not winning didn't mar the experience of the Theakstons Crime Writing Festival though. It was great to see old friends and make new ones. I might not have won but I did a giveaway on Twitter for people to find me at Harrogate. One couple studiously followed my location tweets and eventually found me in the queue for a panel. In my relief to hand over the heavy bag of books, I forgot to sign them. So they had to find me again! 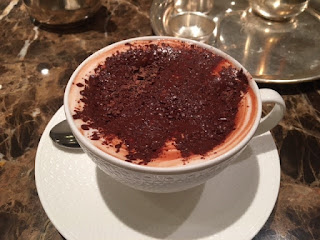 When in Harrogate, Betty's is a must. Their hot chocolate was divine as always but I did find another cafe that also served superb hot choc! They even had a menu with different strength chocolate. I started at 70% and then made it up to 82% the following day. If I go next year, I might make it to 100%!

The main reason for going is to see the panels and two stood out for me in particular. 'It's a Long Walk, Not a Short Hop' looked at creating longevity in your writing career. The panel was Mick Herron, Adele Parks, Andrew Taylor and Martin Edwards, with Denise Mira chairing. I think the most interesting part was Mick Herron saying he'd been fortunate with his publishers continuing with him despite limited success to begin with. This year he finally won the Theakstons Crime Book of the Year after being nominated countless times. I don't know what anyone else thinks but I'm not so sure that publishers are willing to give time for growth anymore. 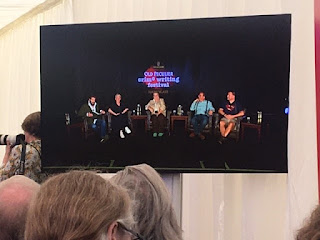 Another memorable panel was 'This Country is Another Country' with Ann Cleeves, Rev Richard Coles, Rosemary Shrager and Tony Kent, with Will Dean chairing. As my DI Bernie Noel series is set in Wiltshire, I was keen to see this. While Rosemary Shrager and Rev Richard Coles' books are more on the cosy end of the crime spectrum, Ann Cleeves made the very valid point that rural crime isn't always cosy. That's definitely more where my books sit. Tony Kent's books are much more urban and set in the USA, so I was confused as to why he wasn't chairing, when Will Dean has a book set in the Fens looking at human trafficking! The most memorable part though was when someone fainted in the audience and paramedics and doctors jumped out of their seats to act. Thankfully, the person was fine. 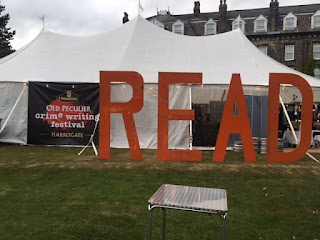 But the best part of all was talking with fellow authors about writing. 'Write the book you want to write' was said to me over and over again, as I obviously didn't get the memo at the beginning of the year. One author even plotted out the changes I need to make in my current WIP. So, I now have enthusiasm again and a clearer sense of direction for the story.

Overall, I had a great time and well worth the money spent. Even if I didn't win the New Kid on the Block Award for Best New Series.