I first found out about the Primadonna Festival last summer, I spotted something online and then an advert on a local roundabout caught my eye. It happens in Suffolk, just on my doorstep so last year I went along for a day to check it out.

This year I bought a whole weekend ticket and had an amazing time listening to some great speakers and even participating.

Primadonna is a festival of books, ideas and inspiration established 4 years ago to promote “the world as it should be, for one weekend” the line-up “gives prominence to women, people of colour, LGBTQI+, working class people, and disabled people”. 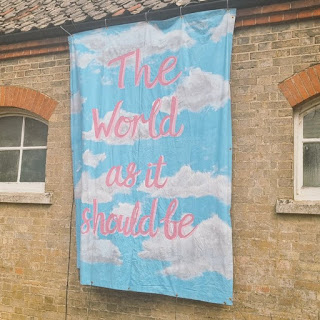 There are sessions for writers, activities to soothe the body and soul, great conversations to stimulate, as well as activities for the kids and a marketplace of yummy food and hand crafted, recycled and sustainable goods to buy.

This year I listened to Joanne Harris and Sarah Shaffi talk to Paul McVeigh about the pretentiousness of publishing. I learnt how to write a killer novel as Erin Kelly was interviewed by Louise Mumford. There was a writing masterclass from Kit de Waal, who I have heard speak before but her advice is invaluable and I always make copious notes when I hear her.

Kit de Waal, an original Primadonna, worked her socks off on Saturday as she also interviewed Abi Morgan, screenwriter of The Split, recently seen on BBC1. Abi has just published her first book This Is Not A Pity Memoir and her true story has some similar plot twists to my own, I rushed to buy a copy and get it signed as soon as she’d finished speaking! 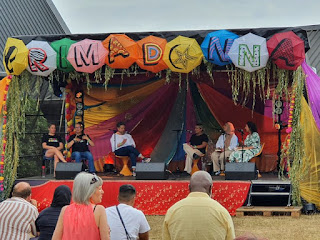 My TBR shelf is FULL UP – thankfully Kit’s own memoir is not out until later this month – make a note to add it to my Christmas list, there should be space on my shelf then!

I went to a special recording of Viv Goskop’s podcast How to Own the Room where she interviewed Catherine Mayer, co-founder of both the Women’s Equality Party and Primadonna, as well as many other hats that she wears – inspiring.

But I didn’t just listen I also went to a Storytelling Workshop led by Justine de Mierre and made up a story about watching a family of hedgehogs crossing the road while eating cheese sandwiches with Tom Cruise!

On Sunday I had the chance to perform, firstly in an Open Mic hosted by the Suffolk Writers’ Group where I read out a couple of poems and a piece of flash fiction. This was followed by a group of us performing poems from my friend Mai Black’s book of Thirty Angry Ghosts. Henry the Eighth, Anne Boleyn, William Shakespeare, Boudicca, the unknown soldier, Mary Shelley and me as Margaret Catchpole, a local Suffolk lass who stole a horse and was sent to Australia. All of us have some reason to be more than a little cross about our lot in life, or death. 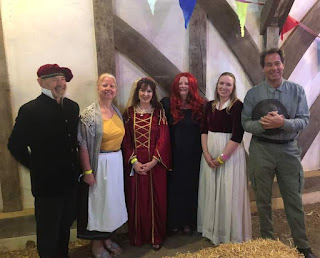 We acted out our stories in an atmospheric old barn bedecked in coloured lights, with haybales as seats, it was full and the performances were enjoyed by all who entered in.

Overall, it was an exciting and full weekend, there was also music, films and a wellness garden I never had chance to explore. Everyone’s Primadonna experience will be different but I’m sure just as fulfilling.

I was thankful each night I got to drive home and sleep in my own bed, although the bell tents that were lined up in the field for campers did look inviting. Maybe next year.

Peter Leyland said…
That sounds like fun Sarah. I really liked Abi Morgan's The Split and referred to it in in a previous blog. She is a great script writer. I will have to look out her book.