Jan Needle - Away with the angels

I once read a book by Gwyn Thomas called The World Cannot Hear You. I can’t for the life of me remember much about it (except that I loved it), but the title has always lurked in my mind. It seemed to me to epitomise the writer’s (or writers’) tragedy. You write, or read, these wonderful books, somebody reads them, or maybe not, and then they are gone. I used to drone on about Gerald Kersh, whom I thought was fantastic. Nobody else had ever heard of him, which I bitterly resented, more on his behalf than my own. Before and during World WarII he was enormous. And now…?
But sometimes, out of the blue, things get jogged. My phone rang not so long ago, and I was asked to take part in a Radio 4 programme about the writers considered to be in the van of the “new realism” in children’s books. My Mate Shofiq was mentioned, and Albes 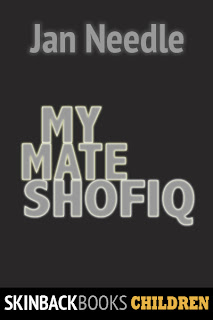 on and the Germans. Good God, I thought - I wrote them! And suddenly remembered being rung up by the headmaster of a school in Peckham to cancel my invitation to appear as keynote speaker in a conference on “Realism in Children’s Literature.” The teachers had had a vote, he told me, and had banned me from his school. My brand of realism was too realistic for them, as their brand of democracy was possibly too weird for me. My Mate Shofiq, the archetypal anti-racist book, was deemed to be racist because it dared to use the reality of racism among the young, rather than pretending it was just something not worth worrying about too much because only naughty persons did it. In this case, even if they’d wanted to, that small part of the Peckham world could not hear me, and that was that.
I agreed to take part in the radio programme, and took the train to London for the interview. It’s nice to visit the beating heart of democracy once in a while. I actually joined a meeting in the Houses of Parliament discussing the proposition that Britain should stop recruiting child soldiers. (We alone of Europe drag them in at 16, when we deem them mature enough to know exactly why they want to risk their lives for oil.) I was actually flying false colours, having published a filthy and appalling book about the army, called The Skinback Fusiliers, under the pen-name Unknown Soldier for personal reasons that no longer apply. It’s 86p on Kindle http://amzn.to/dPaeCb, but don’t show it to your auntie or the servants. It was a fun meeting, and I was actually able to tell Patrick Mercer, MP, that he was talking bollocks (as reported in the Guardian diary.) 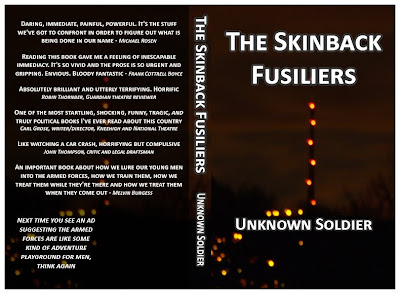 Perhaps I'd better qualify that "filthy and appalling" tag. In fact, Michael Rosen called it "daring, immediate, painful, powerful." Frank Cottrell Boyce wrote: "gave me a feeling of inescapable immediacy. It's so vivid and the prose is so urgent and gripping. Envious. Bloody fantastic." Melvin Burgess wrote: "Next time you see an ad suggesting the armed forces are like some kind of adventure playground for men, think again." Naturally enough (!) my agent couldn't get a publisher to touch it with a bargepole.
The radio show, Comp Lit, was aired on September 8, and it was nice to hear that some of my old muckers, like Gene Kemp, Bob Leeson et al were still up and punching. But the process had set me thinking about getting the unheard heard. Skinback Fusiliers had been serialized for ten weeks on the OpenDemocracy website, people had put me wise to things like ebooks, and as one of my sons has the expertise, the die was cast. My Mate Shofiq and Albeson went up on Smashwords the day of the broadcast, with simple but effective high-speed covers he cooked up, and others are in the pipeline. All suitable for every known e-reader, so I'm assured.
Not just reprints, either. I’ve already written one to go up very soon – Dracula Lives – and I’m working on more. A big dirty thriller about the coming explosion in Britain's prisons, and a comedy kids' or two in case I'm getting morbid. A couple of friends are coming in from time to time, under the banner Skinback Books. Friends – I am a virtual publisher! My expert son, incidentally, who has a master's degree in technology and is currently unemployed (thank you Dave; and no, you're right, he didn't go to Eton) has helped several people with their electronic publishing, at far lower costs than they would have paid professionally. If you're int

erested, he can be contacted through me.
I don’t believe in fairies, though, and I’m quite prepared to find that nothing happens at all, just like in proper publishing. Maybe there are fairies, though, or even angels. The last known burning of a woman who was deemed "away with the fairies" in Ireland was, after all, as late as the early years of the twentieth century. Another book I'll be writing soon! In the meantime, I'm throwing caution to the winds, and putting out everything at 86p. Anything, as my old father used to have it, is better than boredom.
http://www.janneedle.com/
Posted by Jan Needle at 06:00

Great stuff, Jan. Sadly missed the Radio4 programme. I really must get back in touch with Bob Leeson.

I've never had the trouble in schools that you had with My Mate Shofiq. But then, I've never written such an explosively brilliant book. The best I can offer is having a book banned in a school because they didn't think the Print-on-Demand cover was suitable. Well, it did show a goalkeeper garotted on his own goalpost. The irony was that the kids chose it in a competition I put on my website.

I hope you're going to put Wild Wood on ebooks. The best Wind in the Willows sequel in the world.

I heard the resulting radio programme - comp lit, still on listen again on Radio 4 - and really enjoyed it.

The particular book that I remember reading was The Turbulent Term of Tyke Tyler by Gene Kemp - wonderfully funny, I never reflected much on its realism, but I suppose it was, especially in the dialogue. Years later my family moved to Exeter and I recognised a lot of the settings in the story.

They also talked about how this kind of fiction led to the TV series of Grange Hill - also ground-breaking!

thanks for the comments, but i'm still reeling. i thoght it was meant to be up tomorrow (the 15th) and i can't really understand what's going on. but what IS going on, on Radio 4 this afternoon, is a play by carl grose, of kneehigh theatre, called the kneebone cadillac. carl played wagstaffe in kneehigh's version of my book wagstaffe the wind-up boy, which he also adapted, and he is absolutely crash-hot. he went to a truro comprehensive, and is the true voice of kernow, for me. i'll be listening.

and i did listen, and i was right. it was brilliant. catch it on listen again, if you have a soul.

I know about the woman in Ireland! - I was going to write a play about her, but instead, I wrote a play about the minister of Aberfoyle who literally went away with the fairies. The working title of the play was always Away With the Fairies, but then (since it was quite a serious play!) we decided on The Secret Commonwealth, for the production (at the Oran Mor in Glasgow)- which was the book that he wrote about them. The script is going on Kindle very soon - son is doing the cover! Hope you do write the book about the woman in Ireland though. Love to read it.

yes, it's an amazing, horrible story. i spend a lot of time in ireland, and i'm an irish music freak (i play whistle, mandoline, etc, in local clubs) and discovered many years ago that irish fairies are not like we english (we? your last name is not hampshire, that's for sure!)expect fairies to be. i take your point about the apparent unseriousness of away with the fairies as a title, but it was very serious indeed, of course. the woman was burnt by her family because they thought she'd been substited, and the fairies had had the real woman away. any chance of you reminding me when the script comes out? you've got a sale!