Who Am I by Dan Holloway

I was particularly taken by Deb’s piece on the themes that ran through her work, and it seemed like an excellent topic to filch. I’ve been lucky enough to talk about it before, at a couple of conferences – one of the things that spurred me to self-publish was the looming 20th anniversary of the fall of the Berlin Wall. As Songs from the Other Side of the Wall is essentially about the numerous crises in identity that precipitated (all dressed up in Murakami-esque wrapping), it was important to me to get the book out in 2009. And having done so, I was able to take part in conferences marking the anniversary, combining practical and theoretical approaches to identity. The papers I gave appear as appendices in the paperback edition. 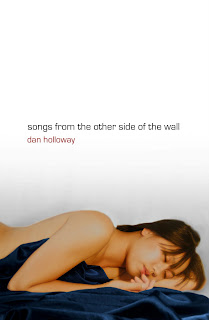 The question of how we even begin to discover our place in such a complex world in which apparent polarities pull us from every direction is the thread that runs through everything I write. In The Man Who Painted Agnieszka’s Shoes, I tackle the issue of the way in which our identity, even our existence, is constructed by the attention of others. The stories and poems in (life:) razorblades included, and the narrative of Black Heart High, all tackle the question of the outsider. What is it like to live as a constant outsider? Does the notion of being an outsider even begin to make sense? Doesn’t it simply mean being inside something else? What would it be like to be outside *everything* - to the extent I have called The Last Fluffer in La La Land a description of “the last contact in human history,” whilst the desperate lovers in Solid are literally unable to connect in any way, even when they have cast off every single trapping of the world from clothes to friends. And at its ultimate extreme, in The Man Who Painted Agnieszka’s Shoes, characters proliferate upon whom the world makes no mark at all (the artist, Ludwig, whom we never see, whose works appear and disappear overnight, possibly in other realities to which the audience is temporarily transported, and who speaks only through a melancholy dominatrix, calls the purpose of his work “an examination of the way we make, or fail to make, a mark upon the world”), from a Japanese schoolboy who locks himself away in his bedroom to study beauty, through a disappearing astrophysicist whose dead wife exists only as traces of light making their inexorable way to the outer edge of the universe, to the central character’s daughter, who went missing ten years before the book begins and may now exist only as diminishing background noise trapped inside a play arrow on a mobile phone screen.

But it is in Songs From the Other Side of the Wall that the question of identity gets its closest scrutiny. Sandrine was born as the Berlin Wall fell, to an English mother – who walked out when she was a week old – and Hungarian father. She lives on a vineyard that’s been in the family for 300 years but wants to live as an artist in the city, and ultimately in The West. She has always seen her life as a series of choices between opposing pairs – East and West, old and new, art and commerce, virtuality and reality, family and lovers. Choices that are heightened when a letter arrives at the apartment she shares with her lover whilst at art college, telling her her father is dying. As midnight on New Year’s Eve approaches, she is transported back to the previous New Year (that’s the Murakami-esque, Norwegian Wood-ish narrative move), when life was full of these simple choices as she played a concert to mark the accession of Romania to the EU. As midnight chimes, riots break out and she witnesses the death of a woman, Claire, she has seen once before on an aborted return trip of her mother’s to the vineyard, a woman with whom she fell instantly in love. The narrative then follows Sandrine through the intervening year as she attempts to piece together Claire’s life and the inexplicable way it might be tied to her own. As she moves closer to the present, each of the things she had believed formed part of her identity fall away one by one, until midnight of the New Year strikes and she is left utterly alone, and we are uncertain whether reality itself may have unravelled around her.

Her identity, like ours, is not made up of adjectives, of either/ors, of categories and definitions. It is something elusive, evanescent, the most fragile thing in the world. Something we can spend a lifetime trying to find and never succeed, only to look over our shoulder and find our life has spooled out to the horizon while we looked.
Posted by Agnieszkas Shoes at 08:57

What a lovely idea with the timeslip. It makes me think of Kieslowski's film The Double Life of Veronique, a haunting piece I have to revisit regularly. Have downloaded the sample!

Ha ha! You *know* that's my favourite film in the whole world. I onc pitched Songs as "what would happen if Murakami turned The Double Life of Veronique into a book"