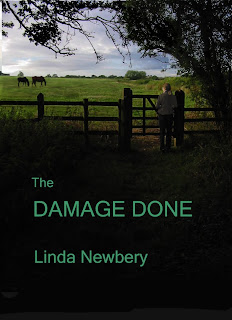 I wonder how other authors feel when their books are finished? For me, each time a book is submitted to the publisher after the final revisions, I have a sense of parting with it, knowing that I’ll never again “live” in that book as I did while writing it. Reading the published book isn’t the same at all; in fact, if I do so at all, it's with trepidation, fearing the discovery of some toe-curling mistake, or at the very least something I want to change.

Preparing The Damage Done for its e-edition gave me the rare chance to live in a book again, and one of my favourites. I revised it for things that have become outdated (Kirsty listening to her Walkman; people smoking in a pub or waiting for dial-up internet connections) but also made numerous small tweaks, taking a word out here, adding a few there, all so surreptitious that probably no one but me will ever notice. Doing this, I experienced the enjoyment of writing all over again.

Especially, I had fun with Kirsty’s father, Graham, a once-successful author who is now sunk into a mire of resentment, self-absorption and false hope. With an author photo that made him resemble the young Ted Hughes, and great reviews for his first novel, he thought his future was assured, but his sales have proved poor, his publishers are turning him down, his early books are out of print, and he’s thrown into ever-deepening gloom with each email from his agent. (There’s a man who needs e-publishing, if ever an author did!) Since the break-up of his marriage, he and Kirsty have been sharing the house, and supposedly the responsibilities that go with it. Kirsty finds her dad generally unappreciative and sometimes infuriating, so wrapped up in himself that he takes little notice of a police warning that throws her into panic.

I enjoyed “being” Kirsty, too, with her secret anxiety attacks, and the lies she tells to shield herself from the outside world. She never goes into public places, and has invented such a web of excuses and lies that she’s in danger of tripping herself up She dreads being alone in the house at night, fearful of waking from a nightmare and being terrified of her own reflection in the bathroom mirror. So, of course, leaving her alone in the house is exactly what Graham does, more than once. One of the reviewers of my previous novel, Flightsend, criticised Charlie, the main character, for being too sensible; well, there were good reasons for her to feel responsible, and it’s not hard to find sixteen-year-old girls who are remarkably mature, but I won’t digress. That critic had the effect of making me decide that no one would criticise Kirsty for being too sensible. She can be, but she also has mad moments, for instance running out of the exam hall during her GCSEs, the summer before the novel begins, and refusing to set foot in school ever again.

Perhaps part of the book’s attraction for me is its quite limited setting: April and May, Kirsty and Graham’s house on the edge of a village, the big house nearby with its lake, the stableyards and fields. There are only two brief excursions away, one to a riverside restaurant, and the second to a busy shopping mall, Kirsty’s personal hell. One scene involves a young man swimming naked in a lake – something which, as one of my editors points out, has become rather a motif for me, with the first occurrence in Some Other War, then again in Set in Stone and more than once in The Shell House (though clothes are worn in both instances there, the immersions being of an even more impromptu nature). Maybe I’ve been consciously or unconsciously influenced by that famous scene in A Room with a View, featuring Rupert Graves, but I’d better try not to do it again – either that, or make a point of working such a scene into everything I write. 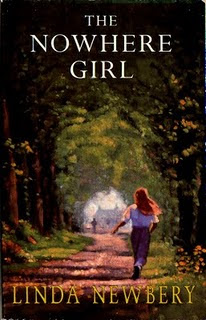 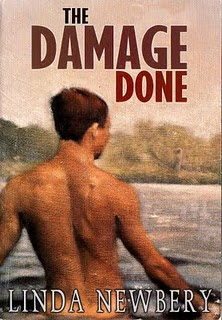 Scholastic, the first publisher of The Damage Done, used this lake-swimming scene for the cover, by the painter Anne Magill. I love Anne Magill’s work, and she did two other excellent covers for me, back in my Scholastic days. But I've concluded that this one, much as I liked it at the time, didn't work (no fault of Anne's, as she was briefed to do it this way); it didn't convey the atmosphere of the story, and, especially, gave a somewhat titillating misrepresentation of Dally, the mysterious skinny-dipper. So, for the e-edition, there’s a new cover: a lot less striking, but I hope it will encourage some readers at least to see what’s “inside”.
Posted by Linda Newbery at 00:01

Damn! Yet another book I'm going to have to buy! I thought the Kindle was going to save me money?

This was such a wonderful paper book. I do hope it does well as an ebook. Sure it will and the cover is very good I think.