The accidental blogger: more than just a platform - by Roz Morris

riters are advised to start blogging as a career move. But in 2009 I’d never heard of ‘platform’. I started a writing blog because I felt like it.

Like many writers with a traditional publishing background, I networked one to one - meetings, parties and email discussions. My writer friends had websites, but I didn’t because I had no books out under my name. Even though my agent was out crusading with my first novel as me (My Memories of a Future Life) we never discussed ‘platform’. 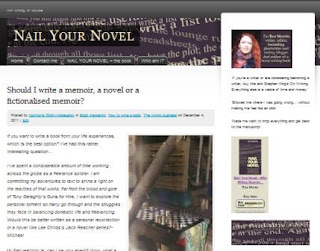 One day a web-savvy friend in the games industry was telling me about blogging, and set me up with a Wordpress ID. I wrote a few posts. It was fun; my own writers’ observatory - looking at real life with a storyteller’s eye.

Writerly friends enjoyed my posts. Non-writerlies were spared a lot of abstruse conversations. When I didn’t post for two weeks, the teenage son of some friends - who I thought would have cooler pastimes - told me I was overdue for a post. Since that day, I have taken my schedule seriously.

I went googling and found a writers’ blogoverse. Then a Twitterverse and a Facebookverse. Each portal I fell through, I discovered new constellations of likeminded souls. I wrote a writing book, Nail Your Novel - Why Writers Abandon Books and How You Can Draft, Fix and Finish With Confidence, which I intended for my agent to sell, but it thrived as an electric indie because of the friends I was making through my blog.

But blogging didn’t feel like a publicity duty; it felt like play - and something I had always done. When I was a teenager, I had shoals of penfriends. Homework finished, my greatest pleasure was pouring ideas onto paper. If you made friends with me you were in for

a lot of reading. You still are.

On the advice of those who know, I put up a second blog of static pages in case people searched for Roz Morris rather than Nail Your Novel. People do subscribe there, but nothing ever happens so they probably think I haven’t anything to say.

I started a third blog to release My Memories of a Future Life. That was also intended to be static pages. Then, to help out a friend, I posted a piece about using music as a creative spark for writing and called it The Undercover Soundtrack. It fitted well on that blog as my novel’s narrator is a musician. I realised I’d love to read a series like this - a literary Desert Island Discs where writers talk about the music that helped them create their characters, stories and settings. 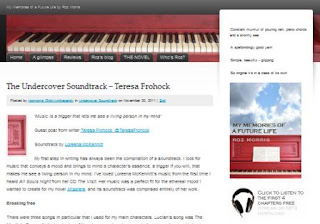 Now the Future Life blog is no longer about promoting that novel, it’s a creative magazine of its own. Every week I host a new Undercover Soundtrack guest, among them other Authors Electric - Dan Holloway and Catherine Czerkawska (coming in 2012) and distinguished AE alumnus Nicola Morgan.

I love having my blogs. I love the feedback of discovering another comment out of the far-spread ether, or a question from a reader that provokes me to examine a wrinkle of the writer’s craft. Blogging turned out to be a useful move in the grand scheme of serendipity, but really it’s what I always liked doing - where at heart I’m still a teenager awhirl with curiosity, writing to friends.

Find Roz Morris on Twitter at @DirtyWhiteCandy and @By

I could never give up my blog. New friends have entered my life and I would never have met them if it hadn't been for my little cyber-room.

No, I couldn't give it up, Glynis. When I had a few space issues with my first blog and I couldn't get into it, that's when I realised what it had come to mean for me - if my blog wasn't out there in the world I felt like I was in solitary confinement!

Great to have your perspective as an experienced blogger when I'm just starting out on the journey.

Blogging's fabulous, isn't it - so so easy for it to spiral out of control though - at one point I think I was managing six blogs.

Getting to know your blogs has been one of th epleasures of this year :)

Gail - thank you! Best of luck with it. I'm sure you'll enjoy having an online home.
Dan - thank you! Six blogs..? I knew you had a few - and rumbustious, provocative reads they are. But six? Your energy puts me to shame.

I'm on four blogs at the moment and it is a bit much. But I obviously enjoy it too. Paul Burston (the Time Out Gay columnist and author) wrote in response to that article by R Mcrumb in the Guardian about writing.

Paul added some ideas about blogging which were ok but he missed out the most rewarding aspect of blogging (for me) and that is the comments and discussion 'below the line'. But then he doesn't allow comments on his blog...

Elly - four blogs:good going, though scary. And the coments are what makes it a living piece, which people take hold of and discuss. I think, though, that ultimately you have to do it because you like it.

I have two blogs at the moment, but one's a bit abandoned while I focus on the one connected with my fiction.
I'm not on Facebook so my blog is my online home - at least until I set up a domain of my own...

I love blogging - I divide my blogging time between my wordarts blog about writing related things, and my other blog, The Scottish Home, which is tied in with my online antique and vintage textile business - not quite the 'day job' but it certainly helps to fund the writing, and somehow or other, the textiles often find their way into my fiction. The Scottish Home often gets more visitors than the Wordarts blog. It always amuses me that by far my most popular post ever was titled I Hate My Memory Foam Mattress - turns out the world is full of people who feel the same! I still get people commenting on it,four years later!

Lee, your blog double-act could be your online home. You can map domains to point to any site you like, including a blog
Catherine - vintage textiles... I seem to remember you mentioned that in a post here and it's reflected beautifully in the textural feel of your covers.

I love blogging. I never thought I would. I began a blog in 2008 just to post writing contest announcements, because I found good ones so hard to track down online. It's morphed into a writing blog, and I've been meeting so many new people there. Like you say, that's the rewarding piece. It's a modern day open diary with penfriends.

'A modern-day open diary' - that's a lovely way to describe it, Suzanne.

I started blogging to get me writing more. And it's worked. Most of the time I love it, but sometimes I find it really hard to find the time between my have-tos.

And don't forget the amount of time you can spend prettifying the blog, adding widgets, pictures and so on!