By Debbie Bennett - December 06, 2011
I expect most people know that the tradition of Santa Claus dates back to the mythology surrounding Saint Nicholas whose feast day is today - 6th December. For those of you that don’t – say it quickly: SaintNicholasSaintNicholas SaintNicholas. Geddit? Nicholas was born in Greece in the third century AD and there are many different stories and legends surrounding his godly life and deeds; he is of course known for providing for the poor and especially children. 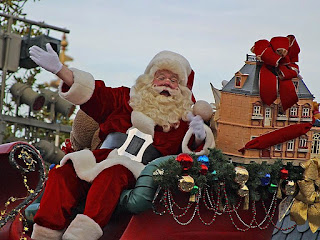 But as well as being the patron saint of children, he seems also to be the patron saint of many dozens of other people, bizarrely ranging from archers to woodturners and everyone in between. Imagine a patron saint of the falsely-accused or seed-merchants; brides and poets? But that’s really no more weird than the modern Santa Claus, is it? We spend 11 months of the year teaching our kids stranger-danger, be careful who you talk to and where you go, and then spend a month telling them it’s OK to sit on the knee of a strange man in a shopping centre and whisper in his ear - although I'm told that apparently kids don't do that these days - they stand near to Santa instead. It's not quite the same, is it? I’m amazed kids aren’t more confused than they are.

And what’s with the red suit and big bushy beard? Ironically, while early 20th century poetry and art depicted Santa as the “jolly elf”, it was good old Coca-Cola who cemented the idea into our minds with the start of its advertising in 1931 (no I didn’t realise Coke had been around for that long, either). And now we worship a largely American Santa Claus who brings presents for all, a long long way from the humble Saint Nicholas who provided for the poor and needy children of the world.
But it started me thinking about all the other patron saints. You can have one for every day of the year mailed to you via the Catholic Online website. There's even Francis de Sales - the patron saint of writers, whose feast day is January 24th (close to my birthday - is that a good omen?)

Do we need saints? Do they give us something to aspire to or bring us comfort in our hour of need? I was given a St Christopher necklace as a child and I always liked to think of him watching over me. Does having a patron saint of writers bring us luck, money, inspiration or comfort as authors? I'd like to think maybe a little of everything - luck to enjoy what we do and hopefully make some money from to enable us to keep enjoying it; inspiration to entertain, inform and inspire our readers in turn. And comfort in taking pride in being good at what we do.

So for any of our younger readers, though you probably won't get any presents today, it's not long until Christmas Eve when the real Santa will be visiting your house if you've been good. And for the adults, it's a bit early I know, but I wish you all a peaceful and happy Christmas.

Dan Holloway said…
It would be very un-Christmassy of me to wheel out my Reformation roots :) Having done more theology degrees than is good for any one person, I do find the whole saints thing fascinating (technically, a saint is simply anyone in heaven - the whole point of having miracles-in-answer-to-prayer proven before someone is made a saint is that this is the only tangible proof that someone is up there). I once went for an interview to be a Religious Studies teacher at Benenden (yes, quite, thinking about it I can't imagine myself fitting in there in a gazillion years either),and nearly got it. The interview lesson we had to teach was on worship. I did very earnest but interactive thing comparing worship styles and purposes, handing round rosaries and models of the saints, and walkmen with taize prayers on. The person who got the job was looking at the word "icon" and spent the lesson talking about David Beckham. Looking back, I think she probably had a point.
6 December 2011 at 09:42

madwippitt said…
Personally I'm looking forward to sinking my teeth into a pork pie left by the Hogfather ...
6 December 2011 at 12:49

Debbie Bennett said…
@Dan. I can see how talking about David Beckham would keep the class interested. I suspect you'd have made the kids think too much and sometimes schools just want pupils to learn the syllabus rather than think outside of it. It always surprises me at my daughter's school that they openly teach for employment and I wonder what happened to learning for the joy of it.
6 December 2011 at 21:07