Guest Post: Pam Howes - Conversations With My Characters And Other Ramblings 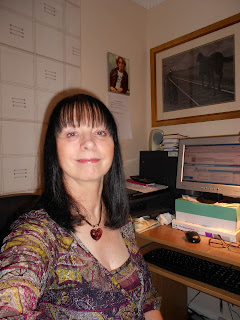 Hello there and thank you to Debbie Bennett for the kind invitation to write a guest post for your lovely website. I've taken a while to read the various and interesting posts from many of the authors involved with the site. I came up with several ideas and then scrapped them after seeing similar. Dan Holloway's where you write and what does it say about you, Andrew Croft's computer crisis and vanishing files, Rosalie Warren's idea of allowing her characters to have their own twitter accounts and blogs. All similar ideas to the ones I had. So now I'm stumped. Or maybe not. I've got a few thoughts up my sleeve.

One of my regular characters, Roy Cantello, is sitting on my shoulder right now, bending my ear and wanting in on the action. He's itching to get his guitar out of the case to start rocking again. I've foolishly promised him a fourth novel. He was only ever meant to be in a single book, not a series. But due to his attraction (that's what he thinks anyway) to the fairer sex, I'm allowing him and his chart-topping band, The Raiders, yet another story. He's quite proud of the fact that last year the girls on an Amazon Forum in the US voted him "The World's Worst Cheating Male in a Romance." It made me laugh. They either loved him or hated him. But for me to have created a character that involved such a lengthy discussion and brought out such strong feelings in a group of readers was quite something. And so Mr Cantello and I have begun having conversations about where I'll be taking the next novel. He'd like life a bit easier this time around, he says. He's been rocking with me for four decades and he's reminded me that he'll be sixty this year and can't carry on hell-raising like he used to. But I reminded him that Mick Jagger, Macca and Rod Stewart are all still out there strutting their stuff and they're a bit older than he is, so he'd better buck his ideas up or I'll pension him off and bring in a younger replacement guitarist. He was quite shocked by that and sulked for a day or two. That's when I humoured him and made the foolish suggestion that I might allow him his own blog posts and twitter ID, like Rosalie's character. He likes the idea, so we may go down that road soon and then he can big up the new novel as we go. We're calling this one Not Fade Away. He likes that. We always use song titles and spend ages choosing the right one to suit the novel's content.

I often wonder if, when I'm sitting at traffic lights or in a jam and I'm having conversations and arguments with characters in my head, do people think "Why is that crazy woman talking to herself?" I can't possibly be the only author who does that, surely. So who's going to own up to talking to themselves? I even burst into song and tap my fingers on the steering wheel to make it look as though I'm singing all along and not really certifiable. I never used to be like this until I started writing, so maybe it does send us slightly crazy after a few years. I'm sure everyone becomes very attached to their characters as I have with The Raiders. After finishing my first novel Three Steps to Heaven, I missed them all so much that I decided it wouldn't do any harm to write a sequel. I'd left the ending sort of open, just in case. 'Til I Kissed You came next and was very well received. Again I left the ending with the possibility that there could be more. And there was. Always on My Mind is the third in the series. And now I have a following of fans and they want a fourth. I've recently taken time out from writing the series to complete a novel that is a stand alone Rock'n'Roll romance, based on a true life story. I'm looking forward to e-publishing Fast Movin' Train, named after one of my favourite country rock songs, next month.

Thank you for reading my ramblings. If you'd like to learn a bit more about me I have a website, with links to my books on Amazon, all available in paperback as well as e-books. There is also a blog in there. It's a new website and I'm still learning, but the first chapter of my newbie is in the blog bit if anyone is curious.

Karen said…
Hi Debbie, that's the trouble with characters, they do like to take over and try to guide the plot where they want it to go never mind our carefully planned synopsis. I talk to myself and to inanimate objects such as the potatoes when I'm peeling them, apologise to the chair when I bump into it,etc. it goes with the territory. Authors are crazy, everyone knows that :)
31 January 2012 at 12:17

Louise Wise said…
Glad I'm not the only one who has zany characters making me talk to myself. I'm another pretender in the car (in my case I pretend to be on a hands-free phone) and chat away to myself, or rather, my characters.

Great post. I'm glad I'm not the only one to have arguments with my characters - my two lead characters made my change the ending in my first book, and another character keeps nagging at me to finish his story. One thing's certain, we writers are neve alone - or bored!
31 January 2012 at 23:37

Pam Howes said…
I realise now that I'm totally sane. You can never be bored when you're writing, there's always someone to talk to, and let's face it, you can never be wrong, but the characters can! Thanks for the comments folks. Pam. :-)
2 February 2012 at 16:42