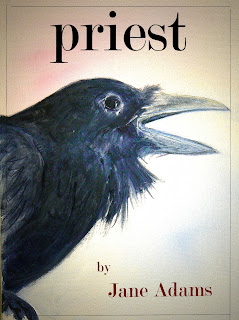 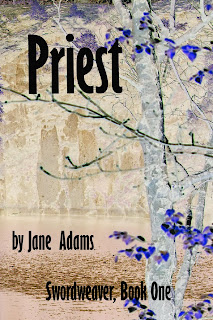 I’m at that post book stage that I hate. Waiting for my editor to tell me if it’s good enough or not and so it’s hard to settle down to anything else involving words. I swear, when you stop looking at them, all the interesting ones go and hide somewhere, probably with a bottle of something alcoholic and a cake. Or chocolate – and not the grown up 70% proof stuff either.

So I’m waiting and I’m catching up with all the stuff that didn’t get done while I finished the book and trying to get my head around what the next book might be about and thinking about what to try on the Kindle next. Immediately next, is to get a proper cover done for the book – PRIEST – that I already have on the Kindle. It was put together in a bit of a hurry because I wanted to be able to say that I did actually have an electronic book – this being an establishment for authors who were doing that sort of thing. But that was waaaay back last Summer and, guess what, I still haven’t managed to change it. I have done the artwork, now it just needs photographing and the typography adding but – and I think this is just another facet of Post Book Syndrome – I’m looking at it and thinking, ‘could that Raven actually do with another coat of paint’? Or another glaze, if you want to be pedantic and proper about it. And I just know, if I give in and glaze his feathers again, it will end up looking like a coal bucket in a snowstorm.

So I’m leaving him alone. What you see above is just a play around to see if the basic concept works.

But what is really nagging at my brain is a book that is about three quarters done and is a new novel in the Mike Croft series. The first for about ten years. The Greenway was my first novel and the first in that series. A new series and then a change of publisher meant that at least one book – this one- and possibly another were left unwritten. Black Eyed Dog (yes, it is inspired by the Nick Drake song) has been constructed piecemeal between other projects, but I’m hoping that this year will see it done. It returns to that slightly spooky feel of The Greenway and other early books, that sense of ‘other’ rooted in the landscape and legend of its East Anglian setting and I’m hoping, before I return to the next Naomi Blake and the new Rina Martin – very different in both style, content and focus – I’ll be able to finish Black Eyed Dog.

Now, I just need to be able to round up those blasted words!

Don't touch the raven again, Jane - he's beautiful! Great looking post altogether - and I know that feeling that all the words have gone and hid!

I agree. The raven is superb. Keep him as he is. Tidy him up and you lose his specialness.