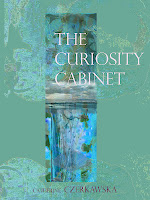 Visit my website at www.wordarts.co.uk
or my blogs at http://wordarts.blogspot.com and http://theamberheart.blogspot.com
I'm always happy to hear from my readers - honestly.


Posted by Catherine Czerkawska at 00:30

Sound advice, Catherine! You have to be very sure of yourself to resist pressure to change your book, and often beginners don't have that confidence. They should think long and hard before making any changes.
But painters are told how to alter their work! - for example, the story of the Renaissance painter who accepted advice from a cobbler on how to paint a sandal-strap. But when the cobbler went on to tell him that he should change the composition, the painter replied, "Cobbler, stick to your last."
And my brother - my cover-artist - once endured a long lecture from an uncle on why the - very good - Klimt pastiche he'd painted was 'all wrong.' (Andrew was about 19 and very into Klimt at the time.) I was surprised by how patiently Andrew had listened. He said that since he knew that my uncle had no knowledge whatsoever of art, and had certainly never heard of Klimt, he had listened to the lecture as he would listen to the wind blowing.

In A MOVEABLE FEAST,when Hemingway's describing how he temporarily had his head turned by "the rich and their pilotfish"...the thing he castigates himself most for is a temporary loss of judgement that made him break his rule of never showing a first draft, or uncompleted draft, of a novel to anyone. "Like showing someone your phlegm" I think he described it. An almost superstitious instinct to protect the subconscious from influence by others is also a factor I think. So I've taken that seriously and sometimes haven't shown a completed draft of a book or story to anyone until a long time after completing it. Even four years after completing a book, and developing it through dozens of drafts...then putting it aside for months and repeating...until I know it is finished (using the Monet test, where he decided a painting was finished when he found himself removing something from the painting, only to put it back in again later...then perhaps remove it again)...but even after all that, and a finished book...there is a vulnerability and suggestibility that can be dangerous if you let it in. So what chance does an unfinished version, or a work-in-progress have...when hit by waves of feedback from various others? Having said that, I know some writers do thrive on the workshopping-type feedback...and many novels start with acknowdledgements thanking those who read their early drafts of work-in-progress. The prospectus for the University of East Anglia writing course used to actively warn off writers from doing the course, who worked "from the subconscious"...they didn't put it quite like that...perhaps they used the word intuition or instinct...but the prospectus warned such writers that the course had previously been found difficult by that "type"...and that writers who had a more "conscious/analytic" approach seemed to do better in that group environment. The internet itself may sometimes resemble such a group environment. I've always known that the only writers who interested me were writing from "the subconscious"...the material could be as gritty and hard as you like...but still, something deep was being touched upon. But that is not the kind of work that does well under the harsh overhead light of premature, or clincal, premature critical analysis. Especially of any kind of work-in-progress...the subconscious will just shut down and stop giving up its pictures if it senses that kind of input coming back at it...or likely to come back at it!

Catherine, I'm afraid this is all too true. Like you, I've taught aspiring writers, run groups, run courses, taught on award bearing coses as well as writing for nearly forty years, yet when I'm given a new text to read my first reaction is to be lost in admiration because I know what went into it. I'm constantly appalled by the reactions of people who I'm sure know nothing about it but who, as you say, think it's only words. yes, I too sometimes think I'm inferior because I haven't go a special skill like painting or sculpting or writing music (though that hasn't stopped some very big names in popular music)and only have words. But then I think of the great writers , Sahakespeare at their head, and know that there can be such things as virtuosos in words. My daughter is in publishing (OUP at the moment) and I like to think I helped inculcate good editing habits in her. If I can take someone else's words in vain, I refer to Mary Hoffman, who once told how she had the real trouble with an editor which you talk about, Catherine. And then she came to my Mary, then with Orchard, who asked her, "Are you satisfied with the book?" The other Mary said she was, so my Mary (who, I hasten to add, had read the book and was very familiar with it) said to the other Mary "Are you happy with it? Mary said she was so my Mary just said, "Well, that's all right then." And so, of course, it was. That's the way to do it. Why do these people straight out of their post-graduate publishing course think the know better and can't bear to trust the author? Or do they want it to be their book as well?

Do they want it to be their book as well? YES Dennis, I have often thought they do (well, in terms of editor/director/producer of plays/screenplays) and I'm afraid I've always resisted. Sure these are collaborative art forms but if I wanted to co-create I'd do that. Each role in collaborative art forms is distinct. I had a set designer once tell me he'd just ignore my stage directions 'because playwrights don't know how to do them.' I asked if he'd 'do' Chekhov's or Ibsen's and he said 'yes, they knew what they were doing' I pointed out rather flatly that I KNEW what I was doing as well - guess what. We didn't work together! Ever. It is the responsibility of the playwright (or writer) to know their part of the craft and practice it responsibly- and then to be able not to cave to others who decide they know better.

Catherine. Of course. Much agreement. Good editors (script or fiction) ask QUESTIONS and engage in a creative conversation. This is a skill (that many people never learn I fear) and quite different from the 'opinions' of others. It's the same in writing and reviewing/reading... which is why I sometimes wonder why we all get so het up when we get bad Amazon reviews. So what? I don't want to be loved that much that I care what someone who clearly has no understanding of literature thinks about my (or anyone else's) work. We need to be working to a sea change where we can explain clearly WHY and WHAT the differences are between 'personal opinion' and 'critical analysis.' Not the same beasts at all. Both have their value but no, no writer should be paying attention to the personal opinion of someone with no trustworthy credentials. Seek only the opinion of those you trust (and the critical appraisal of those you know able to give it) If a stranger told you the ducks webbed feet/jellied eel/monkey brain tasted delicious, would you order it without a second thought? We all like different things. We are all entitled to our own opinions. But let's keep opinion in its place and use the appropriate critical faculties for things which deserve it - such as writing.

And in case I come across like some paragon, I learn through experience too. As a teenager I thought I was clever saying 'I don't like Van Gogh, it's rubbish.' Then I learned something about Van Gogh - man and painting. I discovered that actually, now, I loved Van Gogh.. and I was able to say why and it wasn't 'it's good because I like him.' My opinion was now based on more rigorous criteria and a critical understanding of the aims of the artist, the context of his work etc etc - resist opinion based on ignorance I say, from whichever quarter it comes.

Brilliant post and fascinating comments. I was a complete newbie writer when I joined the peer review site Youwriteon in 2008 and Authonomy later that year. I had several waves of that paralysing "too many editors" syndrome with literally hundreds of comments, all helpful, all saying different things. Fortunately I battled through and in the end learned a lot about when you hear, as Catherine puts it, the right questions and when to ignore things.
Possibly that early experience leading me through the woods in the end (and giving me hundreds of friends I still work with) is why I then wrote The Man Who PAinted Agnieszka's Shoes online in real time with lots of interaction, and now am part of a world where everyone shares first drafts of everything - be it scratch shows for performance work or blogs where we share thoughts on chapters - BUT I would say you should only ever do that 1. amongst people who "get" you and 2. once you are absolutely confident of your voice, of what you are trying to do and say.

It's too late in the evening and I'm too brain dead to do more than to say that I tremendously enjoyed reading this post and also the thoughtful, experienced, non-brain-dea comments made by everyone else. Have just two disconnected things to say - one is that I find that it's important not to say or show too much of a story too soon as it seems to dissipate the internal power that's needed to keep going. And the other thing is that I read a very lively article explaing why authors should always engage with negative reviews. I've put it on the AE private facebook site - mainly cos I couldn't think where it should go best. Worth a read - ?

I was away on a brief, blissful holiday when this post was published - with my phone, but no laptop - so couldn't comment - but thank-you for all the insightful comments. I'm in two minds about all this myself. Have had some brilliant editorial help over the years - and some absolutely disastrous - the trick is to know which is which! (And to be aware of who is giving it!) Collaboration is either a wonderful partnership or an appalling imposition. There seem to be no half measures. Readers are customers, for sure - but I don't think there would be any point in me changing my style to suit somebody who isn't my 'audience'. That way madness lies. In fact, I think one of the good things about eBook publishing is that we can to some extent target the people who are very poorly served by current 'bestseller/blockbuster' publishing practice. And to do that, we have to stay true to ourselves. Some of the worst play reviews I have had over the years (and each of them seemed to be an anomaly - thankfully!) have been from generally young, male, reviewers who were criticising me for NOT writing the play they wish I had written - often the play they wish they could write themselves, but don't have the guts to go for it!