Celtic symbols And How To Get Sidetracked When Researching - Hywela Lyn

By Hywela Lyn - July 29, 2012
I was wondering what to do for my post this month and happened to glance at a silver ring given to me by my dear friend Mary, when I visited her in the States, recently. It's designed like  a  Celtic knot, combined with triskelions, and for me, represents the 'power of three' symbolising the friendship between her, our late much missed friend, the talented American author Sharon Donovan, and myself. 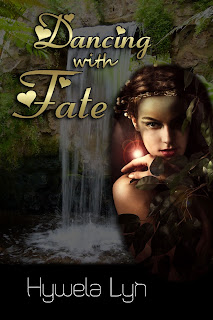 This made me think of the research I did when writing 'Dancing with Fate', set in 5th Century Wales.  I enjoy finding pictures for my posts, and among some of the pictures I found in my file for the story, along with Greek gods and goddesses and war chariots,  were Triskelkions and Celtic knots.

These designs are much used in Celtic jewellery and, of course, the traditional  Welsh carved wooden LoveSpoon.

A triskelion or triskele is a motif consisting of three interlocked spirals, or three bent human legs, or any similar symbol

It represents the concept of completion and progress. The symbol looks like a three legged wheel. There are basically two different components or meanings of the symbol.

According to the first derivation of the meaning, the triskelion, represents actions, cycles, progress, revolution and competition. In all, the triskelion was a representation of a sense of advancement.

The three legs or rather, the limbs of the triskelion often had several different meanings. The symbol was often used on armours, clothes, as a decorative pin for the clothes and also in jewelery. The meaning of the three legs, varied according to the person who was wearing it. Some of the prominent combinations of the meanings, are as follows: 'Spirit, Mind, Body', 'Father, Son, Holy Ghost', 'Mother, Father, Child', 'Past, Present, Future', 'Power, Intellect, Love', 'Creator, Destroyer, Sustainer' and 'Creation, Preservation, Destruction'.
They can also represent The Otherworld: Where spirits, gods and goddesses live, The Mortal World: Where we live,along with plants and animals, and The Celestial World: Where unseen energies live and move about. Like the forces of sun, moon, wind and water.

Celtic knots are perhaps the most notorious and recognizable artwork in Celtic history. They started appearing in history after about 450 AD.The Celtic knot symbol, is also referred to as the mystic knot.

Interesting as I found the triskelion and Celtic knots to be, they added very little to my story, and, indeed, did not even find their way into the narrative. A perfect example of how many happy hours can be spent finding information which has little or nothing to do with the subject one is supposed to be researching for one's novel.   There was a wealth of information I filed away, on clothing, jewellery and weapons which were used in Wales in the 5th century, along with similar information for their Greek counterparts.  As usual, only a small part of all the research I did was ever used, but I ended up with a lot of information to store away  for possible use in the future, having got happily sidetracked along the way.

So, what interesting things have you discovered in your research when writing - or indeed reading? Have you unearthed any interesting objects from history or your own heritage, and do you get as easily sidetracked as I do? 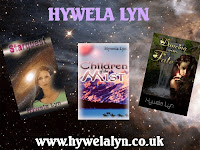 You can find out more about Lyn and her books on her  WEBSITE
She also blogs at her own BLOG, and THE AUTHOR ROAST AND TOAST
and is on TWITTER and FACEBOOK


(Shameless Promo:  'Dancing With Fate' is available on SMASHWORDS  at a discount of 25% HERE until 31st July only!)

Some of the above information taken From Wikipedia, the free encyclopedia
5th Century Celtic Knot Dancing With Fate Druids research sidetracked triskelion Wales

madwippitt said…
This was fascinating! I do agree that it is very easy to get sidetracked by research: one of my favourite but so far least useful bits was a couple of paragraphs about how the secret of creating the famous Damscus steel sword blades was lost ... and then rediscovered centuries later by accident. I'm sure I'll find a home for this snippet of trivia one day!
29 July 2012 at 10:05

Susan Price said…
Yes, great post. Finding out things - and never knowing what you will need to find out - is one of the joys of writing. My present research file - which will be added to my larger research file eventually - had pieces on modern field communication, poisons, concussion and broken bones (and people's comments from the internet describing the pain of their own broken bones), on whaups, peewits and whimbrels, kitchens, and 'celtic counting'.
29 July 2012 at 10:57

Hywela Lyn said…
Hi Madwippit and Susan, thanks for your comments - looks like you'e both come across fascinating items in your research too, it's amazing the bits of information one can come across!
29 July 2012 at 12:46

Catherine Czerkawska said…
I so identify with this post. I love research too. And find that I only ever use a fraction of it - but I do think that it informs the rest of what you write. Costume and textiles are what I love best, so find myself doing far more than I need in that line. A couple of years ago, I found a wonderful book at a university library sale, (why they were getting rid of it, I don't know, but their loss was my gain!) called 'Costume in Detail, 1730 - 1930.' It's stuffed with detailed annotated line drawings of costume from the underwear out - perfect for a writer!
29 July 2012 at 12:55

Hywela Lyn said…
Hi Catherine, I do agree that even though one only ever uses a small percentage of everything one researches, it does help one to write more convincingly because of this background knowledge. What an amazing find that book was - I can imagine how thrilled you were with it!
29 July 2012 at 13:59

Mary Ricksen said…
I have pages of useless information saved from my first book. Went a little nuts. But this is interesting stuff. What Celtic symbols would you think could go on my time travel ring??
Now I have to talk her into coming back again! love this girl!!!
Sharon is always with us!
29 July 2012 at 19:19

Hywela Lyn said…
Hi Mary, dear friend, love you too. I don't think any information is 'useless', I'm sure you'll find a use for it some time! :)

I love the way you use the ring for time travelling in 'Tripping Through Time!'!

julia jones said…
Very interesting initself and I agree with your comment that finding pictures for these blogs turning out to be much more funthan expected. I've realy changed my attitude to visual research since I've been with ASuthors Electric.
30 July 2012 at 07:24

Hywela Lyn said…
As the old saying goes, Julia, 'a picture paints a thousand words. I just love them - and they can be very inspirational too!

I once learned more than I ever needed to know about Japanese swords. Most recently I spent hours researching prostitution in the Ottoman Empire... my google search history must be insane!
30 July 2012 at 11:21

Hywela Lyn said…
Hi Jolene - Isn't Google wonderful! Yes, it's amazing how much information you can pick up when researching!
30 July 2012 at 19:27