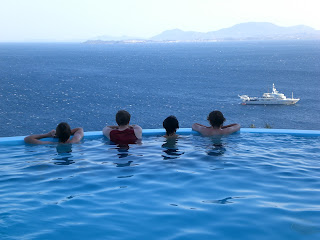 Oh dear. This month has rolled around particularly quickly and I find myself with half a day to write a blog post and not much of a clue how to fill it. I suppose I should have prepared for this eventuality, but like the frivolous grasshopper rather than the industrious ant, I've spent the time hopping about on holiday (Santorini and Ireland, since you ask), filling the hours with chat, wine and light reading rather than writing and opinion-forming. 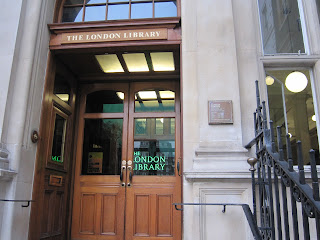 These are the topics I've been mulling over so far. First, I thought I could write about the London Library: the unexpected gems one can find when browsing its shelves, the atmosphere of intense academic study (extreme reading, you might call it), the charmingly old-fashioned comments in the visitors' book deploring mobile phones and welcoming a mouse which occasionally appears in the reading room, the way one feels so satisfyingly intellectual after a visit - but I don't really have the energy to work that up into anything particularly interesting.

So then I thought I could write about my dog, mad Monty -  inveterate food-bowl-guarder and jumper-upper - but Hywela has cornered that particular subject in her previous entertaining post, and I suppose there are people about who don't like dogs (the ones whose faces Monty tries particularly hard to lick). So here is a picture of him instead, taking the air on a beach in Dorset during his own holidays. 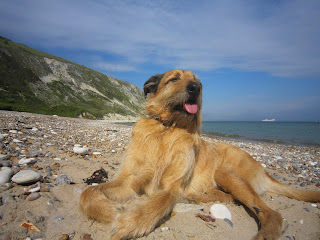 Aha! Then I thought I'd cracked it: I could write about the current work in progress (another book in my 'Swallowcliffe Hall' series) and discuss my heroine's dilemma: poor silly Eugenie, of whom I'm becoming increasingly fond, tying herself in knots as she tries to find a suitable husband. But I can't bring myself to share Eugenie just yet - I want to keep her to myself until she's fully formed and beyond reach of criticism. I find myself agreeing with Terence Blacker's article in this month's issue of 'The Author' magazine: if you talk about what you're writing in any detail, all the steam goes out of it.

This brings me to the nub of my problem. It's taken me so long to get immersed in this story, for the writing to flow with any sort of momentum, that now I'm in it, I don't want to come up for air. I find myself resenting the effort to frame sentences that aren't to do with this book. My characters are waving at me and shouting, 'Oi, over here! You can't leave us like this! Not in the middle of County Meath with our reputations about to be ruined!' I'm worried the magic will go, that if I break off and write in another voice about twenty-first century matters, I won't be able to get Eugenie's back again. I so admire people who can tweet and blog interestingly while writing fiction at the same time (practically everyone else on this site, it would appear), who have articulate, witty opinions on topics of the day, but I find I'm not as good at multi-tasking as I thought. Just at the moment, the blogging barrel is running somewhat dry. ('Somewhat' is a very Eugenie word, incidentally.)

So please forgive a rather shorter, humdrum sort of post. I've had to type it twice as the first version disappeared, only to re-emerge sneakily on the post list - but I know that doesn't count. I hope you like the photographs, at least. Good luck with any writing or reading, and enjoy the summer. Perhaps next month I'll have thought of something to say. Or perhaps not. Have we always had to have opinions about things? 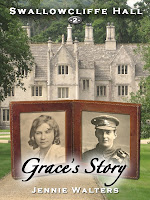 CallyPhillips said…
The London Library is the ONLY thing I miss about London nearly 20 years after leaving it!
As re the rest of your post - Like you, deep into 'other things' and makes it hard to concentrate on blogs - reading or writing - but felt if I didn't comment you wouldn't know you are 'not alone' in that respect. But maybe a deafening silence will tell you the same thing - writers are writing. Sometimes we just have to go away and do it. And no one will begrudge you the desire - so your post works for me on all levels! (I too, think dogs would be the default setting but yes, sadly some folks don't find doglife rivetting in and of itself.)
2 July 2012 at 12:10

Dennis Hamley said…
So you went to Santorini. We were there last month when our cruise ship called in. What a wonderful islsnd. Beautiful in a way Lanzarote certainly isn't. Ans all the white houses. Lovely.

Jennie Walters said…
Yes, it's wonderful, isn't it, Dennis? I love the way the houses are built into the cliffs. How interesting that you like to talk about what you're writing. And thanks, Cally, for the support. I felt a bit guilty with this post as everyone else's manages to be so articulate but hoped I'd be forgiven a cop-out. So glad to hear you like the LL too. It's expensive but less than a gym, and MUCH more enjoyable!
2 July 2012 at 13:57

CallyPhillips said…
And I have been to Santorini too (in the olden days 20 years ago when I 'DID' holidays. Then I moved to the ultimate holiday destination and stopped travelling! But Santorini was nice. Expensive even then but NICE. I prefer rural Crete though but again haven't been there in 20 years so even the rural bits may be touristy now. In fact, now I think about it, it was on Santorini that I wrote my one and only song in Gaelic! (Not sure I could remember what it meant now never mind play it!) Happy days. You see, I have holiday memories and so I don't need holidays. And you lot go for me so I can share in the joy without the travel or expense! Result.
2 July 2012 at 19:26

julia jones said…
I think blogs can be slice of life - and we all know how varied that can be. Maybe you hit the alluvial layer ... and maybe it's just buried refuse. (Agree about the not talking btw)
3 July 2012 at 14:13

Jennie Walters said…
Yes, absolutely, Julia. That's why I thought I'd come clean rather than trying to make something up! And yes, Cally, holidays can be stressful too. It's nice to go away but it's lovely to come home - even if it is constantly raining...
3 July 2012 at 16:03