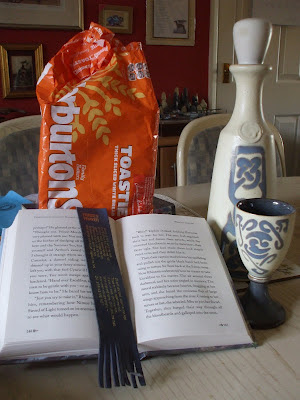 Early yesterday morning TH White dropped in to share his overwhelming grief at the loss of his beloved dog Brownie: after pouring out his sorrow he lingered a little longer to help with a bit of research on dogs for a book I'm currently working on.
With a bit of work done, I felt justified in taking a little time off to enjoy a picnic lunch with Ray Bradbury, who was joined halfway through by Isaac Asimov; regretfully I had to send them away far sooner than I would have wished in order to get back to work.
In the evening my dinner guest was John Wyndham, who cared not at all that the grub was on a tray rather than the dining room table (which is too covered with reference materials at the moment for formal dining). He kept me up rather later than intended, but when I finally got to bed, I shared a mug of cocoa with Terry Pratchett before drifting off to sleep.
Yes, you're never alone when you've got a book: what's more, the company is always of your choosing, so is mostly pretty good. And nowadays e-readers have made it easier than ever before to invite both old friends and new into your house, whether planned in advance or on a spontaneous whim.
As far as criticisms are concerned about the ease of e-publishing resulting in the public appearance of some truly dreadful books I'd like to point out that firstly, there were also some pretty terrible ones in existence before the digital era.
And secondly, if you don't like the book, you don't have to read it. My Kindle allows me to sample a pretty big chunk for free, so I have just as much idea as to whether I'm likely to enjoy it as when browsing through a paper book in a shop. And better still, there's a seven day return-and-refund system if you really can't get on with it. I can't see Waterstone's offering a refund on a partially-read print book.
Anyway, I really must go, as I have guests awaiting me - a trio of Musketeers and their new companion, a country bumpkin by name of D'Artagnan ... 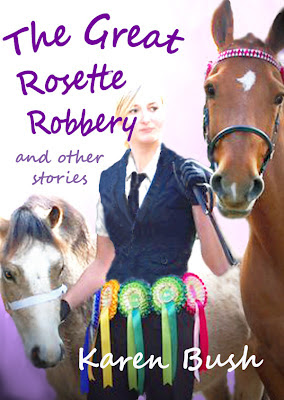 julia jones said…
Happy days - I hope you have some lady dinner guests occasionally! And do you feel the need to vary the menu - put out a nosebag when Black Beauty comes to tea, perhaps? And a marrowbone for Lassie?
10 July 2012 at 16:47

madwippitt said…
Oh yes, of course there are female dinner (and lunch and breakfast) guests: you just caught me on the wrong day for them!
10 July 2012 at 20:59