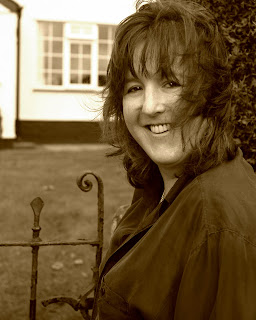 In February, it will be two years since I took the plunge into self-publishing, by releasing a collection of previously-print-published short stories onto kindle. It was an experiment – with the concept of epublishing, Amazon’s KDP process and getting to grips with the technical side of formatting and uploading.  Once I’d successfully managed that, I went on and epubbed a thriller and a young adult fantasy novel. Sales have been good – more than I ever expected – and while I do think the kindle bubble has deflated somewhat, there are still opportunities for writers to take control of their careers.

Having said that, there hasn’t been a rush of big publishers beating a path to my door and offering me several million for print rights. Not that I expected it – I’ve been on the fringes of the industry for long enough to know how it works. I’ve had big agents and big-6 (or is is 5 now?) editors in the past and I know I can write, but I’m never going to generate sufficient sales for today’s risk-averse marketing departments.

So would I trade indie status for a traditional deal? Hell, yes - if it got me into bookshops (as in actually on the shelves ready to buy, not slink-to-the-back-and-order). I’m not ashamed to admit it. I’d love the validation of shelf space in Waterstones and WH Smiths. But I’m knocking on 50 now and it isn’t going to happen, so what’s next?

I spent Christmas looking at the next logical stage – print publishing Hamelin's Child. I don’t have the capital for an old-fashioned print run, nor the time to take, process and dispatch orders (such optimism!), so I went for POD print on demand. There seem to be several front-runners for POD; some offer "service packages" including cover design and formatting help – even editing – at various prices, but I already had an ebook and a cover, and I wanted something simple that would seamlessly integrate the print book with the ebook on amazon and that would be printed in the UK for UK customers to avoid exorbitant postage charges. So I went with CreateSpace in the end, after hearing how pleased other writers had been with the quality of product and the service.

Loading up the interior files seemed easy enough. CreateSpace has a set of templates according to the size of paperback you want. I opted for 5" by 8" as it seemed to fit nicely with other books on my shelf – I do feel that sometimes self-published books stick out a bit by being neither paperback or trade-paperback size. I downloaded the word template and squirted in my text.

Having spent ages training myself to not think in terms of a "page" for ebooks (no page numbers as page sizes can be changed on an ereader), I now had to go back to that slightly old-fashioned way of thinking, making sure I had headers and footers and that chapters started in a pleasing place halfway down a page. I had the front matter to think about – the pages before the story starts. But it all worked with no errors and CreateSpace accepted the uploaded file. 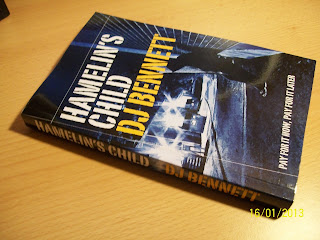 My ebook cover designer said he’d happily adapt the ebook cover to a wrap-around print cover. I had to tell him the size of the book and the page count as calculated by CreateSpace; he also needed to know whether I’d chosen white or cream paper, as cream is very slightly thicker and so makes a small difference to the spine width of the book and hence the size of the cover. Consultation gave a 50/50 split on preference, but I’m glad I chose the cream as it’s less harsh and somehow looks more professional to me. 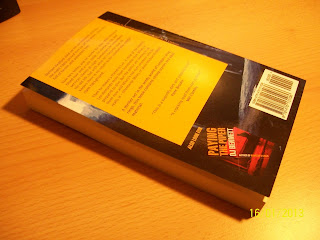 So my new cover came back as a PDF, with a back blurb and a couple of review-quotes. I wanted to pick quotes that anybody could easily go online and verify (as opposed to making them up), but I also wanted to get permission, so I was restricted to the reviewers that I was able to contact and had names that would look all right on a book cover (some people have strange user names on amazon!). I uploaded the cover to CreateSpace and waited 24 hours for them to verify everything matched up.

The next day I got an email telling me it was all looking good and I could order a proof copy. Hmm - £4 delivery in 6 weeks or £12 delivery in 2 working days? I went for 2 days, despite being sure that proofs were shipped from the US and therefore short of a courier service there was no way I'd get it in 2 days. But it arrived on time and I am very impressed with the quality.

Altogether a painless experience. It's now on CreateSpace's own ebook store and amazon, linked up with my ebook so that the reviews show on both. And it's awesome. Holding a physical copy of my book in my hand! Seeing it on my neighbour's coffee table ...

Aaaand ... the sequel to Hamelin's Child was released on kindle just last week (roll on the drums, please!). Paying the Piper follows the story of Michael six months on and is already gathering some great reviews (and I haven't even had to pay them...) Other e-formats should follow soon and my next task is getting the paperback version sorted. 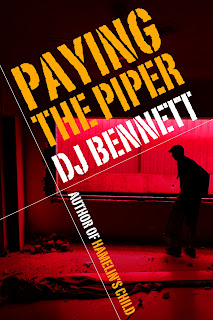 
A note from another of our bloggers, Hywela Lyn:

I'm being interviewed at lovely Samantha Holt's Blog, please come and say 'hello' if you have a moment.

Great post, Debbie, with some real thought for food: I was hungry this morning for new possibilities...and had never considered POD. Cheers.

great to read this Debbie. I'm still in 'seeking agent no man's land' but CreateSpace may become an option for my new crime novel rather than trying all the smaller presses. Linda Gillard seemed pleased with her venture into CS too. Do they dictate pricing of the paperback?
Good luck with both dead tree and kindle books! I shall look up your new kindle sequel.

That looks really good - there's something about a wrap around cover, isn't there?
Looks wonderfully professional (of course) Appearance can make all the difference to your initial approach to a book - and crucially, make the difference between picking it up or ignoring it when it's a physical copy if you are coming to it blind rather than by way of recommendation.

POD (Lulu) brings me very few sales, but I like a print copy for the final stages of editing. It's a great help to work from this conventional format rather than only a printout - perhaps my generation, perhaps the effect of a 'real' book.

I've been very happy with Createspace, the quality was good and they are now distributing in the UK. However, it's a bit of a pain that the author copies still have to come from the US!

Great post Debbie - and many apologies for the note about my interview - it wasn't supposed to go up here, I intended it to go to my own blog but somehow Blogger re-directed it.

As for 'Create Space' I think it's pretty good once you get your head round the 'formatting'. The quality of the finished product is pleasing too. When I used it for my novella 'Dancing With Fate', it was myfirst attempt and I needed to order several print proofs from the US, before I was satisfied - which was very expensive postage-wise, now that you can proof on-line it makes it a lot easier on the purse!

CreateSpace do set a minimum price - then you add your own mark-up. Customers only pay local postage on top of that, but for proof and stock copies, you have to pay postage from the US, but the unit cost is quite low, so I can still make a few quid profit on selling them myself and the customer gets them cheaper than buying online.

Or you can just buy copies from UK (not author copies) you may find that with free postage and your royalties taken into account it's as cheap to order from Amazon UK as to do the whole US postal/author copy thing. just a thought!
I've been pretty happy with Createspace as POD though I have to say that their paper choices aren't that great - I far prefer bookwove paper. But they are CHEAP and that's got a lot going for it! And they don't look cheap. Agree with you re cream paper though. The white paper can look really harsh. Anyone got any Lightning Source stories for comparison?

Costed it out, Cally, as I wondered too, but it does work out cheaper, even in small quantities

Interesting post. Have been considering going POD for a while - have decided to go for it!