Re-illustrating books for the Kindle by Elizabeth Kay 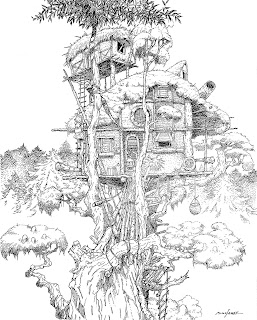 There are lots of reasons for re-illustrating a previously published book when you’re converting it for the Kindle. The originals, drawn by someone else, may not have been to your liking. It may simply be a matter of style – or the illustrator may have got some things fundamentally wrong, like the age of the protagonists, or whether one of your fantasy creatures has wings/horns/sharp pointy teeth. The best illustrations I have ever been sent were those of Miho Sataki, in the Japanese editions of The Divide, who read everything so carefully that each tiny detail was absolutely accurate. Her sense of design was wonderful, too.


If the book was first published some time ago the drawings may be out of date; the shoebox-sized mobile phone of 1995 bears no resemblance to the smart phones in use today. There’s also the question of royalties – this way, you avoid those complexities altogether.


The actual mechanics are remarkably easy. Make sure your illustration is a jpeg, and centre where you want it in the text. If you’re using Word you can re-size it as many times as you like in situ, until you’re happy with the result. Remember that anything entered as a jpeg won’t change size when you alter the font size, and that not many people in the UK yet have a Kindle fire (although quite a few have iPads!), so the picture must look just as clear in black and white as it does in colour. The cover, however, is another matter, as this will appear on the Amazon site in full colour, although it will be monochromatic on most Kindles.

I never draw or paint straight onto a computer screen. I don’t seem to have the same control over a mouse as I do a paintbrush. However, if you scan a watercolour or a pastel or pencil drawing into a paint program, you can end up with something close to perfection – bleedbacks obliterated, smudges and paint splatters removed, lines cleaned up and flat colours regularised. The trouble is that paint programs are really complicated, and unless you have the time to learn them inside out you’ll never use all the functions, and may well drive yourself bonkers trying to work out how to do one apparently small thing. So I teach myself everything on a need to know basis. I’m finally getting to grips with the difference between smudging and softening and dodging and burning – but the most important button of all is the Undo! It’s also vital to save different versions of your illustration as you go, and start the numbering at 01 so that they always line up in order. Unless you think you’re going to go into the hundreds, in which case you start at 001. I do this for book versions as well, because I’m lazy enough not to want to hunt through files for the most recent document.


The program I first acquired was Paint shop Pro, followed by Photoshop. They both work along fairly similar lines, but each has its easy bits and impossible bits and using a combination of the two has been the answer for me. I’ve never got to grip with layers in Paint Shop Pro, although in Photoshop it’s easy. But Photoshop offers such a bewildering array of ways to muck about with the your artwork that I stick to the simpler range of options on the other program.

The cover of Jinx on the Divide was executed in several stages. For the background, I found a photograph I had taken of the Northern lights in Norway, put it into Paintshop Pro, enhanced it, and brightened the colours. I also changed the outline of the mountains to something I liked better, and erased a building. I then saved this, and loaded into Photoshop. The picture of the Dire Wolf was done in watercolour, and scanned into my computer. I then had the contrast increased and the edges tidied up in Paintshop Pro. I saved it again (with a different filename – you don’t want to get your pictures confused) and loaded it into Photoshop. I used the lasso feature to capture the image, and then made its white background transparent. After that I placed it on top of my background, saved the new image, and clicked on the Text feature. I placed the start of the text in the middle of the page at the top, so that as I entered the words they remained centred. I could mess around with different fonts, sizes and colours until I arrived at something I liked. I then saved the final image, and there was my cover. 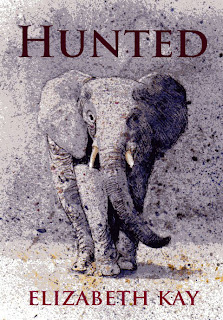 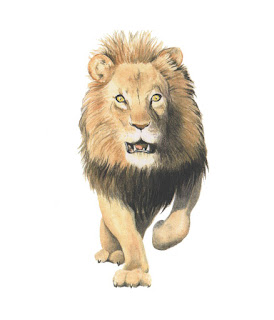 I’ve had a couple of covers such as Beware of Men with Moustaches that have a white background. Adding a faint border is important, because otherwise the shape of the book is lost. There are a lot of professionally-produced covers around these days, but there’s something about them that seems to give the game away, and makes them look too similar even if the subject matter is poles apart. I can’t put my finger on exactly what it is, but covers designed from scratch are more eye-catching. 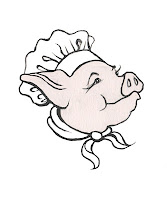 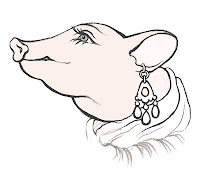 I’ve really enjoyed re-illustrating my own books, and I’ve done some pig cartoons for someone else - a volume of poems called Old Possum's Book of Practical Pigs. I only did a pencil drawing for each one of these because they were stylised, and just used black and white and pink. Then I put them straight into Paintshop Pro where I could clean them up, and make sure the lines were the right thickness. Black is a killer; I always use a dark grey, as it’s less in your face.

madwippitt said…
Interesting post, thanks! Although with Haunting Hounds I had trouble persuading Kindle to upload my book initially and ended up having to reinsert all my title page illustrations as photographs rather than as illustrations inserted into the document.
17 March 2013 at 10:40

Dennis Hamley said…
Really useful post, Elizabeth. Thanks so much. I desperately want to get Hare's Choice and the others in the Hare Trilogy up on Kindle but it would be a hopeless cause if I couldn't have the marvellous Meg Rutherford b/w illustrations. I didn't realise it was possible yet. This gives me hope!
17 March 2013 at 10:50

Bill Kirton said…
Fascinating and encouraging because, like Dennis, I'd like to try formatting and trying out some of my children's stories on Kindle. Not sure how many British kids read Kindles and the like but it seems lots of American ones do.
17 March 2013 at 10:58

Chris Longmuir said…
I loved the covers, and have great respect for your talent. I just wish I could draw as well as you do because it adds an originality to the finished image.
17 March 2013 at 11:02