At school I was voted the guy least likely to tear off his clothes and run into the sea. That’s not actually true. But it could be. I don’t do crazy impulses. I’m the man who holds up the coffee shop queue before ordering the same latte as ever. I use SatNav. On the train. You certainly wouldn’t catch me braving the English Channel in October, without so much as a towel to hand. And yet, on one autumn afternoon several years ago, I did. And I’m still trying to understand why.


My wife and I were in Lyme Regis, in Dorset, walking along the sea front. We spotted a commotion in the water. In the midst of a group of swimmers, something dark kept bobbing up. We saw a fin. It was like a scene from Jaws, except the screams were not of terror but delight. Then shouts from around us confirmed it: ‘A dolphin!... A bottlenose dolphin!’

My first fear – that the creature must be in distress, to be so close to the beach – vanished almost at once. The dolphin was clearly reveling in the attention, scooting from one bunch of kids to another, splashing them, letting itself be stroked, and generally showing off.

At that moment I realised that I’d probably never have this chance again. To swim with dolphins is often held up to be one of life’s great experiences. Some polls have even voted it, ‘The number one thing to do before you die’. And this wasn’t some captive dolphin in a pool, or some purchased, pre-packaged ‘experience’. This was the real deal, a wild dolphin, an utterly random stroke of fortune, quite literally out of the blue. And I didn’t have any swimming things.
﻿﻿﻿﻿﻿


No-one was more astonished than me when, a minute later, I was splashing out into the cold water towards the dolphin. (Note to Dorset police: I kept my shorts on). The next ten minutes was like being a kid again. I was amazed at the creature’s speed, disappearing underwater and reappearing many metres away, almost at the same instant. Its skin I recall as feeling wonderfully strange to the touch, like a living bar of soap, though when I tentatively grasped its fin to see if it might tow me along like Flipper, it rolled over with a glare as if to say, ‘I don’t do tricks.’ It occurred to me then that this animal, with its size and power and huge jaws, could easily have killed any one of us human beings in seconds – without meaning to, or even noticing. Yet there we were, children and adults all, prepared to risk our literal necks just for the sake of being close to a dolphin. 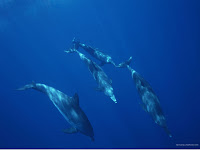 Why? What possessed me? For a long time afterwards I struggled to answer that question, and somehow these efforts resulted in a book. The Storm Bottle is a tale of humans and dolphins, an adventure story as full of thrills and perils as my other books (The Cat Kin Trilogy), but drawing for inspiration on that magical experience. In the story, Michael nearly does lose his life when he tries to swim with a dolphin – before discovering what it’s like to be one. The action unfolds in Bermuda and its surrounding ocean, where we learn that it is not just human beings who tell frightening legends about that lonely archipelago. And maybe we come a little closer to answering that tantalising riddle: why is swimming with dolphins the number one thing to do before you die?

Lee said…
Lovely to hear about your dolphin experience, Nick. But it's not no.1 on my list. In fact, it's not on my list at all - unlike reading all your future books.

(And I'm glad to see you'll be a regular here, since for some odd reason this is one of the few blogs I bother with - probably because it oftens irritates me as much as I irritate its contributors!)
3 May 2013 at 08:50

Lee said…
Susan, do you know that you can not only touch nettles but eat them if you roll the leaves the right way? Another of those odd bits of knowledge we gardening folk collect.
3 May 2013 at 20:25

glitter noir said…
Charming post, Nick--and one that succeeded in getting me to hit that link. This book joins my ever-growing list of books to read. Cheers.
3 May 2013 at 22:50

madwippitt said…
No idea - what is this amazing fascination dolphins hold for us? And deeply envious - we never saw dolphins when we holidayed in Dorset! (And I enjoyed the dolphin link between Cat Kin and Storm Bottle too ... a fun bit of continuity!)
4 May 2013 at 11:35