Who Inspired You To Write?

I was decidedly short of inspiration this month - so I decided to look to my fellow Authors Electric for an idea. I found it in Ann Evans' post from earlier this month, about James Hadley Chase.
I enjoyed Ann's post a lot, and it made me wonder: Was there a particular writer who inspired me more than others? The name that came immediately to mind was: Rudyard Kipling.
When I was seven years old, my father gave me, for Christmas, three books: The First Jungle Book, The Second Jungle Book, and The Just-So Stories.
He gave them to me because he had loved them, when he'd been a child. I read them. And re-read them. I read all the Mowgli stories first. Then I ventured out and read some of the stories which aren't about Mowgli - The White Seal, Quiquern, Rikki-tikki-tavi.
I came to know them almost by heart. Why, as a child of eight or nine, did I start to write? - Because there were no more Mowgli stories. I asked my Dad for more, and he said there weren't any, because Rudyard Kipling was dead.
So I saw that I was going to have to write my own. I shouldered the responsibility and made the attempt. I was at least armed with a new word - 'replied.' I distinctly remember learning that word from Kipling. I used it a lot, for a while.
It annoys me that, if you say you're a big fan of Kipling's writing, people look at you rather askance. He has this reputation as a 'Little Englander', a jingo-istic, Imperialistic war-monger. Probably racist too.
He was of his time, and doubtless had many attitudes which we find disagreeable or ridiculous now - as did almost every other admired artist of the past. Our own most noble beliefs will almost certainly be regarded as ridiculous and disagreeable in a hundred years time.
But when I read Kipling, I'm often struck by the wide range of his sympathy and understanding - which is quite unexpected in someone who is supposedly so narrow. Take, for instance, the story

'Quiquern', about Inuit who live far out on the ice. Kipling sets his story entirely within their world: their hunting, their myths, their stories. He took me, as an eight-year-old, inside it too.
And consider Kipling's most famous hero, Mowgli, the boy raised by wolves. Now, when Edgar Rice Burroughs wanted to write about a lost boy raised by animals in a jungle, he made his Tarzan an English lord.
Kipling could easily have done the same. It wouldn't have given him any great plot difficulties to have made Mowgli the lost son of an English officer of the Raj. But he didn't. Mowgli is strong, athletic, brave, resourceful, handsome, intelligent - the perfect hero, in fact - and also the son of poor Indian charcoal burners.
Then there's 'The Miracle of Puran Bhagat,' which always made me cry when I read it as a child - but I still went back and read it again. It's the story of a high-ranking Indian Prime Minister of 'a native state' who, at the height of his considerable achievements, gives up everything and becomes a wandering holy-man.

He had been, as the Old Law recommends, twenty years a youth, twenty years a fighter, - though he had never carried a weapon in his life - and twenty years head of a household. He had used his wealth and his power for what he knew both to be worth; he had taken honour when it came his way; he had seen men and cities far and near, and men and cities had stood up and honoured him. Now he would let those things go, as a man drops the cloak he no longer needs.

Some, I'm sure, would call the story patronising, but that depends on how you read it. As Kipling remarks with, I think, admiration, Puran Bhagat '...did a thing no Englishman would have dreamed of doing..,. ' giving up all the rewards that his hard work has earned him. Because the rewards weren't the point.
Kipling tells Puran Bhagat's story with, I think, admiration and respect - and, again, it certainly opened the eyes of this council house, Black Country kid, to just how various this world is.
The  Just-So Stories are very different. They dance! This is the opening of possibly my favourite, 'The Sing-Song of Old Man Kangaroo.'


Not always was the Kangaroo as now we do behold him, but a Different Animal with four short grey legs. He was grey and he was woolly, and his pride was inordinate: he danced on an outcrop in the middle of Australia, and he went to the Little God Nqa... saying, 'Make me different from all other animals by five this afternoon.'

(I came across this blog by another fan while I was writing this. I love the blog's title!)
When I wrote 'The Ghost Drum', I worked hard to make my prose rhythmic and incantatory - and I remembered The Just-So Stories. They helped me, even though their intent was comic and mine was more serious - but Kipling set me an example of what could be done.
Later I read, and loved, his Captains Courageous, and my idea of the world was stretched again by Kipling's account of the hard lives of Newfoundland fishermen on the Grand Banks. It's another book that I've read many times. My favourite chapter, I think, is the one where the crew are shut up in their cabin while their ship rides out a storm. They tell stories, differing according to their nature and the land they originally came from. 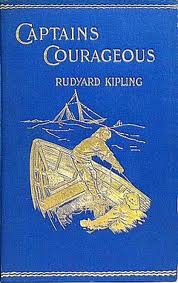 But Kipling wrote so much. I could mention his ghost stories - some of the most chilling ever written.  There are his historical stories, such as those in 'Rewards and Fairies,' and, of course, his long novel, 'Kim', which has been described as 'a hymn to India,' as the hero follows his lama on the road to the Himalayas. As in 'Puran Bhagat' the world of politics and espionage is contrasted - and weighed - against that of spirituality.
And there's this:-


I could not dig: I dared not rob:
Therefore I lied to please the mob.
Now all my lies are proved untrue
And I must face the men I slew.
What tale shall serve me here among
Mine angry and defrauded young?

It's called 'The Dead Statesman' and I bet you wouldn't have guessed it was Kipling, if you hadn't already known. It has an uncannily modern ring, doesn't it? You could probably name the statesman. It was written at the end of the 1914-18 War.
What writer most inspired you?

All illustrations (except the Captains Courageous cover) are by Kipling's father, Lockwood Kipling.

Susan Price is the writer of 'The Sterkarm Handshake' and the Carnegie winning 'The Ghost Drum.'
Her website is here.
Her self-published e-books can be found here.
Her own blog, Nennius, is here.

OK, I'll admit it: the Nancy Drew books. I wrote a fanfic play in 5th grade, saw it performed in front of the entire school, and decided, wow this is for me.

So what happened? I eventually discovered Faulkner, Proust, and Eliot - not quite the stuff of fanfic.

I love Kim! And I love India.

I read everything I could get my little hands on - Nancy Drew, Agatha Christie, James Bond, Huckleberry Finn - and especially The Complete Sherlock Holmes.

But the books which inspired me to actually write (I always planned to do that in retirement, just got 'retired' a bit early) are Dorothy L. Sayers' Peter Wimsey mysteries.

I never thought about that until now - but that's what the subconscious threw up, so that's what I'm going for - and there is a flavor of that in the novel I'm writing.

So glad you love Kipling. Rikki-Tikki-Tavi was the story that did it for me as a very small girl. I taught him to adult classes for a few years and the more I read the odder and more interesting I found him. When ever I go to the London Library I look at his portrait on the stairs, those bushy eyebrows, and think of him as Beetle, the myopic school boy. I like his 'fey' qualities and the repressed sadness of his grand home at Bateman's seemed to me to rank among the saddest things .. I'd best shut up now but THANK YOU for this evocative post

Nancy Drew, Dorothy L Sayers and Kipling - a mixed crew! But an inspiring one, obviously. Isn't this why it's important for children to have access to as wide a variety of writing as possible? Who can tell what kind of writing is going to do it for any particular person?

You've inspired me to go back and read some more Kipling. Thanks, Sue. My own inspiration was Byron...though it took me a while to focus more on the work than the life. To write professionally? Lawrence Sanders, to me, was the consummate pro. And I wish he hadn't fallen quite so deeply out of favor.

Good to hear someone wave the flag for Kipling - and let's not forget that it was 'If' that was voted the nation's favourite poem. And Rikki_Tikki-Tavi was an early favourite of mine, as was the Maltese Cat which was just brilliant ...

The currently fashionable prejudice against Kipling is one of my hobby-horses, so thanks for giving me the chance to take it for a little trot... For a man "of his time" to write lines like "You're a better man than I am, Gunga Din!" was quite remarkable, I think. "Oh, East is East, and West is West, and never the twain shall meet" was a notion he put forward only so that he could demolish it. I'm sure most of those who quote that one have never read the poem it comes from. And it is often forgotten that he won the Nobel Prize for Literature. They don't give those away with cornflakes.