By Elizabeth Kay - May 17, 2013
The book that really captured my imagination as a child was The Lost World, by Sir Arthur Conan Doyle. It mentions blank spaces on maps – imagine! There actually was a time when the word Unexplored was commonplace. The Romans and mediaeval cartographers used to write Hic sunt leones (here be lions), for unknown territories. There’s one instance of Hic sunt dracones (here be dragons) on The Hunt-Lenox Globe, which dates from about 1510. So what was that about – Komodo dragons, or fossilised dinosaur bones?


I was into dinosaurs long before they became popular – in fact, I don’t think my mother even knew what they were. Someone had given me a book called Animal Life of the World, a 1930s compilation full of wonderful chapter headings such as Death Dealers of the Deep, Queer Servants of Man and Hunters of the Air. And there, amongst them, Big Game of Other Days. Clay models, photographed in black and white and resembling over-endowed rhinoceroses, placed in realistic dioramas. I thought they really existed, probably somewhere in Africa.
Once I learned about evolution I realised the error of my ways, but brontosaurs and allosaurs had already found a place in my heart and Conan Doyle’s book was the adventure story of my dreams. I did think the premise a bit unlikely – a sheer-sided plateau, isolated, unexplored, full of extraordinary creatures? Where could that possibly be, in this overly accessible world of the recent past?
And then I went to Venezuela. 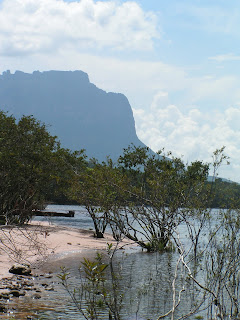 These table-topped mountains really do exist, and they’re called tepuis. They were the ones that inspired Conan Doyle, and there are still some that haven’t been climbed.  You can see why. The Angel Falls tumble from one of them, and we climbed to the foot to swim in the pool at the bottom. It was a treacherous journey, over tangled tree-roots and ankle-turning stones, and that was the easy bit. The sheer face would have been another matter altogether. Landing someone on the top would have been very risky, due to the dense vegetation. You wouldn’t even be able to lower someone from a helicopter, as they’d probably fetch up in the canopy with no way down. But what a gift for a writer. The sort of place where anything might exist, and anything could happen. And despite the gung-ho imperialist anthropocentric storyline, I don’t think anyone’s exploited that environment any better than Conan Doyle.
I’ve frequently used a setting I’ve experienced in my travels as a starting point for a story, as you remember all the smells and the tastes as well as what you see and hear and touch. So when I went to Galapagos I was armed with a camera and notebooks, fully expecting to come back with a story I couldn’t wait to write. And what happened? Nothing. I still haven’t written anything about Galapagos, even though I went there almost three years ago. I incorporated my Costa Rican impressions into the beginning of The Divide, and amalgamated all my African experiences into Hunted. But the place I thought would be the most magical of all has resulted in zilch.
I’ve wondered a lot about this, and these are my conclusions.
Galapagos is now a huge tourist destination. It’s strictly controlled, and with good reason; the flora and fauna are unique, and invasions from other places could be devastating. Sniffer dogs patrol the arrival area at the little airport, searching for seeds of alien species. Even boat trips between the different islands involve rigorous checks. You are limited as to where you can go, and wherever you do go there are going to be other people. Although the scenery is remarkable – particularly on South Plaza Island – you couldn’t get lost on it. And on the bigger islands, such as Isabela or Santa Cruz, you’d never meet an animal that hasn’t been photographed a thousand times. Even underwater the sea lions that buzz you, the turtles that swim lazily alongside you, the iguanas that feed on the sea bed – they’ve all starred in numerous documentaries, and you might well believe they had really good agents.

I can’t help thinking that the creature bursting forth from John Hurt’s body in Alien was inspired by something gruesome like the ichneumon fly. Nature had all the best horror ideas first.
In other words it’s all beautiful, exotic, and different – but the unexpected is in short supply, and it’s the unexpected that is meat and drink to a storyline. Your back garden and a stereoscope are more likely to reveal something that hasn’t been seen before, as long as you don’t have an aversion to invertebrates.

Technology has a lot to answer for, I reckon. It may have given us excellent tools like the stereoscope, but no sooner has someone arrived in some obscure part of the world than they’re posting their photos on Facebook, and uploading their videos onto YouTube. Television has turned the depths of the ocean and the tops of mountains into familiar territory. The private lives of dangerous beasts are common knowledge. No longer can you lose your hero unless you have an elephant trample his mobile phone, or a serial killer trash her SatNav. And if you want something new in the world of natural history, you need to look small. Insects maybe, or diatoms and protozoans.Or spiders.We live on an overpopulated planet, and things can only get worse. As we eat up all our resources, our imaginations become victims too. 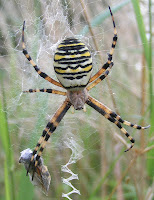 Perhaps this is why so many writers opt for fantasy, science fiction or historical scenarios. Even the fifties is a better place to be than the 21st century.

I’m going to have to find somewhere less publicised than the Galapagos, I think. It’s no accident that Mongolia provided the best material, as it’s not a holiday destination that occurs to many people. Any suggestions? Apart from North Korea, that is.
Alien dragon Galapagos iguana sea lion spider tepui turtle Venezuela

I don't think we need to go to far flung places to set our stories. Within ten minutes I can be in the middle of 'no where' with the dog. There's a trickling stream, deep ditches, long mounds (which I think at one time must have been border mounds marking the edges of a local estate), a dark and sometimes quiet wooded area and a track that feels like walking through a tunnel (the tree branches now hide the sky as you walk along it). Relatively few people go there - dog walkers, horse riders and the odd rambler. Almost a lost world. Ideal for something sinister to happen.

Susan Price said…
Two fascinating takes on 'lost worlds' from Liz and Lynne.
And Sir Arthur C-D wrote some other great stuff besides Sherlock. His Brigadier Gerade stories are great - and very funny.
17 May 2013 at 10:29