NICK GREEN - "And on the pedestal these words appear:"

It’s surprisingly hard to commit ‘Ozymandias’ to memory, I think because of the oddly fragmented way the phrases tumble around each other, like the stones of the ruin. So here it is in full:

I met a traveller from an antique land
Who said: Two vast and trunkless legs of stone
Stand in the desert. Near them, on the sand,
Half sunk, a shattered visage lies, whose frown,
And wrinkled lip, and sneer of cold command,
Tell that its sculptor well those passions read
Which yet survive, stamped on these lifeless things,
The hand that mocked them and the heart that fed:
And on the pedestal these words appear:
"My name is Ozymandias, king of kings:
Look on my works, ye Mighty, and despair!"
Nothing beside remains. Round the decay
Of that colossal wreck, boundless and bare
The lone and level sands stretch far away.

I first came across it as a child, through the BBC TV series of John Christopher’s ‘The Tripods’ (and Dad thought that TV rotted the brain). It’s intrigued me ever since. Perhaps it’s not especially hard to interpret – Pride goes before a fall, all things are transient, etc – but then, it ain’t what you say, but how you say it. (Shelley’s friend Horace Smith wrote his own Ozymandias poem, on exactly the same themes, and it’s… not as good. But I bet Shelley was awfully kind about it.)


One of the imponderables that I like to ponder is the question of how savvy Ozzy really is. Is he truly just a tyrant overstuffed with pride, or a wise philosopher king, canutely aware of his own limitations? Is the irony of his proclamation accidental, or intended? Is this king telling the mighty to despair just because his realm is so grand, or because it was so grand and still crumbled into the sand? We’ll never know, and often it’s the things you’ll never know which add up to a great poem.


‘Ozymandias’, for a lot of readers, is a pessimistic piece. To them it says, ‘No matter how great you are, or think you are, you will come to dust in the end.’ As for myself, I’m more optimistic - a ‘visage half-protruding’ kind of guy.

The bleakness of Shelley’s vision can serve, paradoxically, as a kind of release. It reassures you that it doesn’t matter how great (or insignificant) you are, because we all end up the same. So, no pressure. We may consider Shelley’s sonnet to be light years better than Smith’s, but eventually both will be forgotten, as will all of humanity’s works, from Shakespeare to Justin Bieber. See, now you’re smiling.


But the good news  doesn’t end there. Because if there’s one obstacle guaranteed to stop you achieving anything, it’s the fear that you won’t measure up. You won’t win that race, you won’t pass that exam, you’ll never write a book half as good as the one you just read. So why bother? Why make the leap, if the bar is set too high? The biggest single cause of writer’s block isn’t a lack of ideas, but lack of confidence. What’s the point? I’ll never be good enough.


No, you won’t be. No-one ever is. ‘The best in this kind are but shadows,’ says Shakespeare’s Theseus, ‘and the worst no less.’ Or (put another way by McMurphy in One Flew Over The Cuckoo’s Nest), ‘I tried, didn't I? Goddamnit, at least I did that.’ 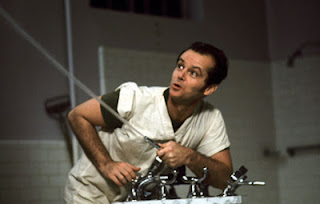 If you’re going to fail anyway, then fail heroically. Don’t pass up the gift of being able to create, just for fear of falling short of some arbitrary ideal. When the final whistle blows we’ll all be in a dead heat anyway, neck and neck with Ozymandias, king of kings. The bar isn’t set too high. There is no bar. It’s all just lone and level sands, stretching far away.

JO said…
How fab is this - permission to fail heroically!

While I rarely declaim in the kitchen (I'm more likely to sing, equally likely to frighten the cat), i see what you mean about Ozymandias. I heard it read once, and it didn't sound anything like it does in my head!
3 September 2013 at 09:10

Lee said…
Another way of looking at it: that the knowledge I'll never be good enough is precisely the reason I keep going. But I'm a 'I'll damn well show you' kind of gal.
3 September 2013 at 10:18

Catherine Czerkawska said…
'Don’t pass up the gift of being able to create, just for fear of falling short of some arbitrary ideal.' I love this. My Yorkshire grandad used to say 'no try no av' which I suppose means much the same thing!
3 September 2013 at 10:19

Lydia Bennet said…
As one of the AE poets, I'm delighted to see an entire blog post structured round a poem! yes it would be easy to be put off creating by the very existence of Will S et al, but if the ideas come, they have to be written/painted/played etc.
3 September 2013 at 10:42

Dennis Hamley said…
Yes, as an inveterate and noisy quoter of poems all round the flat and incurable inserter of concealed quotations in my books, I love this post. I read part of Ozymandias at my daughter's wedding, for a reason I defy you to guess. Oz is such a great poem, with that riddling ambiguity at the end. And you've tied it in brilliantly with the necessity of keeping on creating no matter how futile it sometimes seems. It reminds me of the great vet Canadian Frank Manolson who, in C Is For Cat, gave us the superb line about neutered Toms still searching for females: 'he's forgotten why he does it but he goes on doing it just the same.'
3 September 2013 at 10:53

madwippitt said…
Oh Nick. How can I break this to you gently? You are the only one ...