When to go it alone – Elizabeth Kay

Five of the six books I’ve converted for the Kindle have been books that were conventionally published in the first place, and the rights have reverted to me. The sixth, Beware of Men with Moustaches, was one that had been accepted for publication and then the whole series was cancelled by the publisher. So my latest book is the first I’ve dared to do without the security of a previous history.

I wrote it eight years ago, and my agent handled it. It got very close to acceptance several times, and then fell at the last hurdle. The main reason seemed to be that accountants don’t like birds – they’re not cuddly enough. It’s aimed at the same audience who read The Divide, so I’m hoping to pick up readers that way. How come a talking griffin is acceptable, but an intelligent parrot isn’t? They’ve both got beaks and wings…
I’ve always been interested in the concept of really clever birds – ever since I was walking down a perfectly normal suburban street some years ago, and saw a magpie watching me. To my surprise, it flew down onto the ground in front of me, and regarded me with great interest. Always polite, I said, “Hello.”
“Hello,” replied the bird – quite clearly, and in a friendly sort of way.
It wasn’t until someone came round the corner looking for their escaped pet that I realised I wasn’t going mad. And recently the programme by Chris Packham demonstrated that birds, unlike a lot of other animals, have a concept of the future. And as for the New Caledonian crows… they solve puzzles faster than small children! 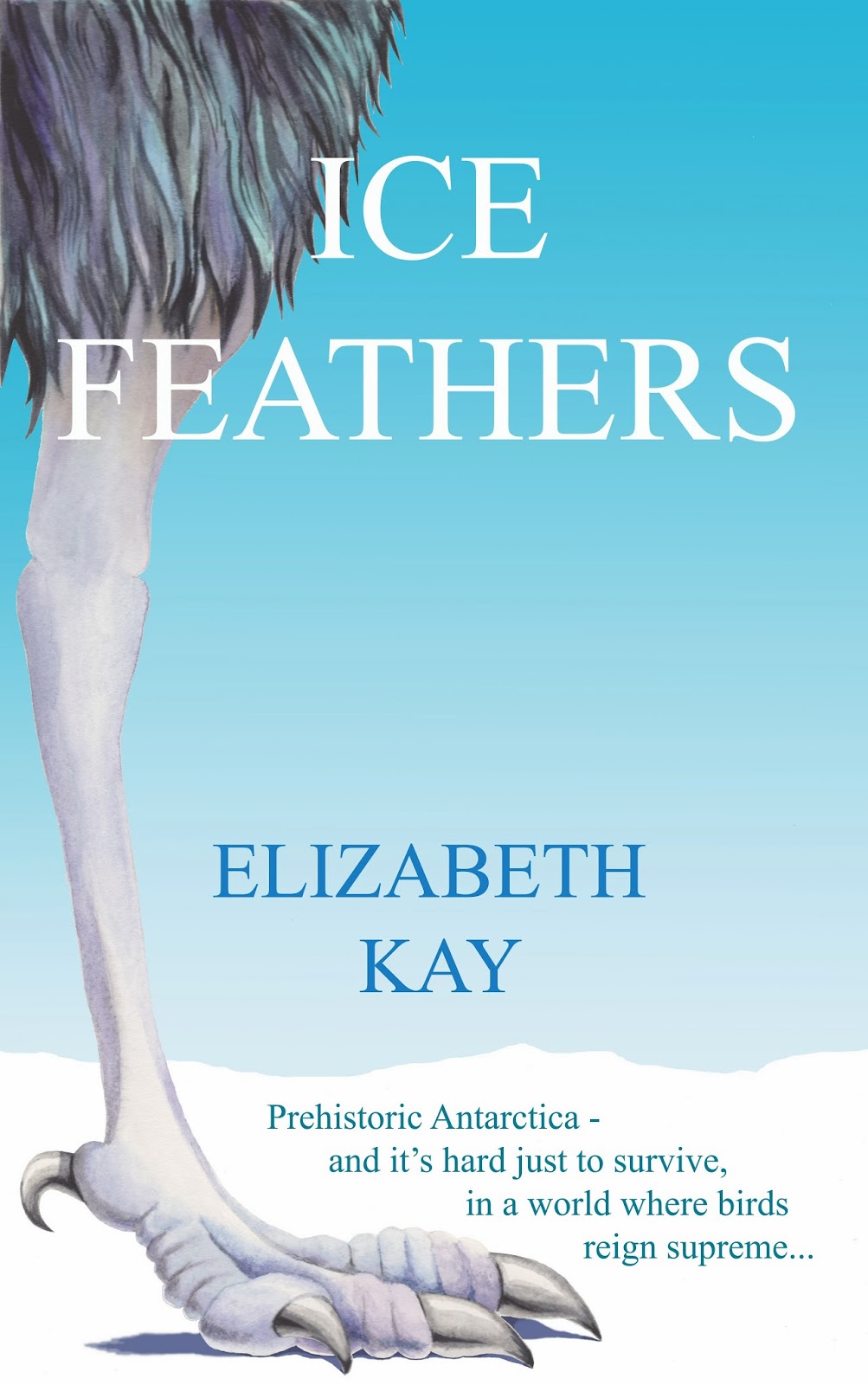 The premise of Ice Feathers is as follows: It’s set in Antarctica, ten thousand years ago, when for a short time just the coastal strip is ice-free.  All the evolutionary niches have been filled by birds; the main predator is a giant eagle and copper-feathered parrots are just as intelligent as man. Kura’s thirteen, and her aunt wants to marry her off to get rid of her, so she steals her uncle’s flightless riding-bird, the vicious and unpredictable Plume, and sets off to find her real parents.  Her search becomes entangled with an attempt to thwart the plans of a tyrannical and unprincipled chieftain, The Varka, and puts both her and her friends in grave danger. Can they outwit The Varka, and save the copper-feathers from extinction? And who really is Kura’s father?
When Jurassic Park was being filmed it was decided to make the velociraptors twice the size they really were. If you look at the fossil skeletons in the Natural History Museum, you’ll see that they really weren’t all that big, although they looked more than capable of tearing you to shreds in the blink of an eye. And then, right on cue, a new species was unearthed in Mongolia that was twice as big.
Something similar happened with Ice Feathers – I was half through it, having decided that a civilization buried under the ice could be rather good fun, when my elder daughter told me about The Piri Reis map. This was drawn on gazelle skin in 1513, and recently rediscovered in a drawer in the Topkapi Museum in Istanbul. It suggests that the coast of Antarctica really may have been ice-free in relatively recent times. This is disputed, of course, but it was enough for me to look at the creatures it suggested lived there and take those as a starting point to depict a land that could once have existed. Any evidence of an earlier civilization would now be buried beneath the ice. I chose to populate this place with the prehistoric fauna of New Zealand, where every available evolutionary niche was filled by birds. Haast’s eagle really was powerful enough to kill human beings, and the grazers and browsers of other continents were represented by different species of moa – I think about eleven have been discovered so far. The huge carnivorous 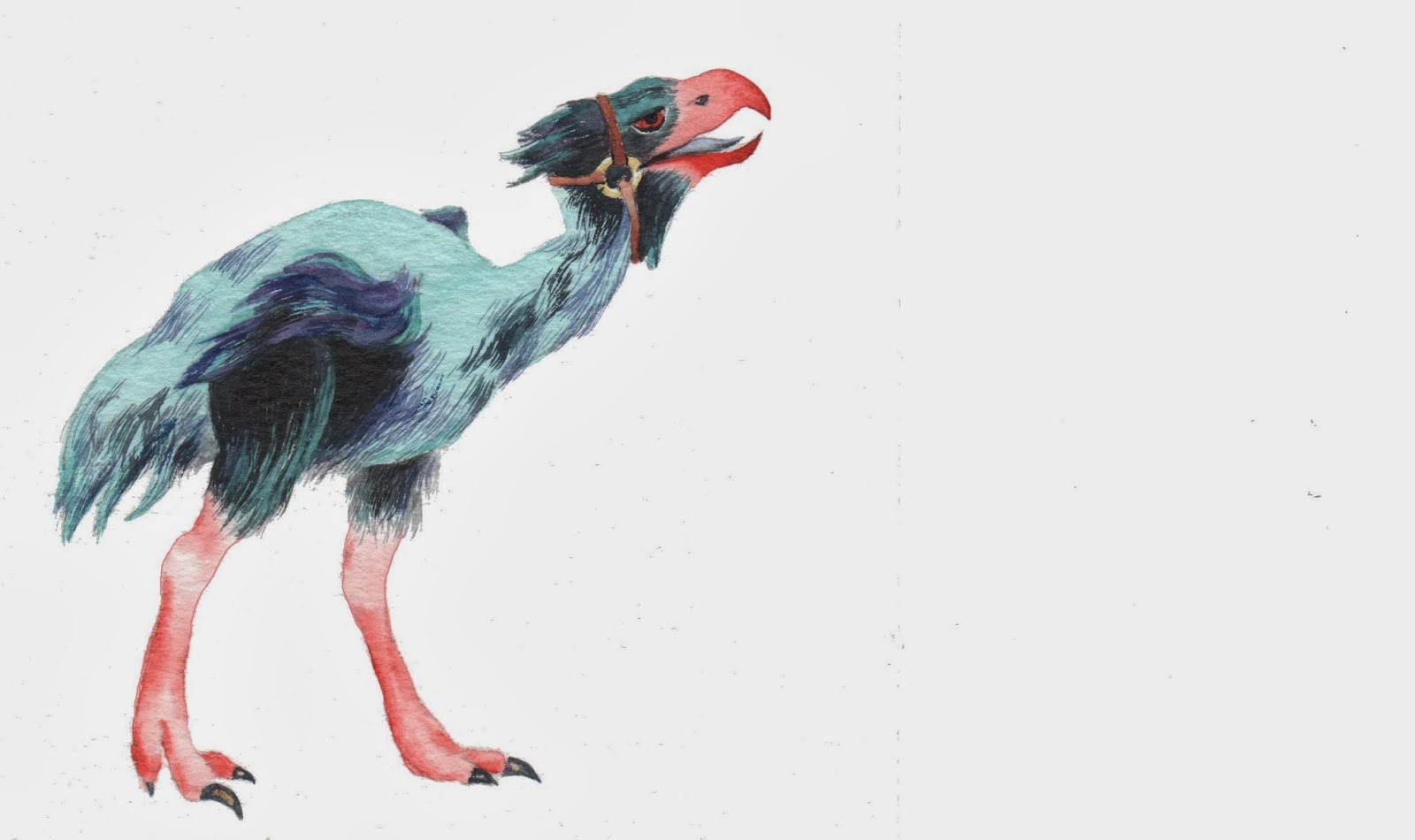 phorusrhacos once roamed South America, the other land mass close to Antarctica, and the terror cranes that my characters ride are based on these birds. Parrots are extremely intelligent, and individual birds have been known to use language appropriately. Therefore, postulating a species that was, in many ways, more intelligent than man doesn’t seem too implausible. But human beings don’t like competition, whether from their own species or another one entirely, and so it’s reasonable to suggest that some years after this narrative ends man did indeed succeed in wiping them out. And finally, I have shown climate change in reverse where, at this point, the world was getting colder. Whatever the weather, it’s a good idea to plan ahead… 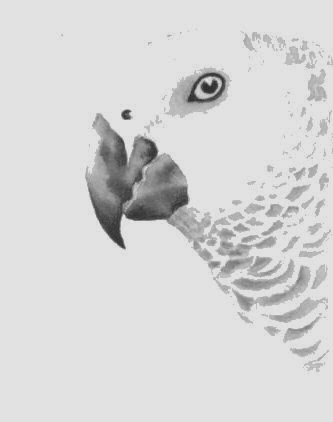 My agent has been very ill recently, so this seems the right time to try out something new. One of the things I really love about doing a Kindle book is that you’re completely in control. As I’m also an illustrator the cover was my decision, and I really enjoyed doing little illustrations to scatter throughout the text. No one is telling me that I can’t have an elf going off with a pixie she’s just met because of stranger danger, nor is someone else depicting my characters as being years younger than they are in the book. I’ve really enjoyed preparing Ice Feathers – I’m already thinking about the next one I might do. Times have changed so dramatically in the last eighteen months. The first book I converted was an adult one – I didn’t think parents would be happy about their children carrying around electronic reading devices which could so easily be lost or damaged. How wrong I was. A lot of kids have Kindles or iPhones or even iPads – they’ve grown up in an electronic world, and mostly they don’t abuse their equipment. And with the advent of colour, it’s just as worthwhile doing children’s fiction as it is books for adults. So I’m going it alone – and I’ve dedicated the book to my agent despite the fact that she won’t be getting any royalties from it!

ooooh, looking forward to reading this! And love the pics and that cover is fabulously eye-grabbing!
The freedom of self-pubbing is wonderful ...

I've read this book - or an earlier draft of it - and it's great! Really imaginative and exciting with - as always with Liz - really loveable characters. Just could not understand why it hadn't already been published. But then - we're all familiar with that song.

I too am fascinated -- by the intelligence of many birds, and by what you're doing with this. And lovely bird illustrations as well.

Thank you for the lovely comments about the artwork! I've entered it for ABNA again - got two contradictory reports last year, one which expected it to go the distance, and the other who simply didn't like birds and thought an intelligent parrot was just plain silly. But that's ABNA for you...

What an original idea - love it, and will get it.
What is ABNA??? And who's your agent? Might you get in touch, off this rather public forum? We seem to share a similar publishing history, except that, in spite of having a Fine Arts degree, I'm not an illustrator.

ABNA - for those masochistic enough to decide to enter. The Amamzon Breakthrough Novel Award. http://www.amazon.com/Breakthrough-Novel-Award-Books/b?ie=UTF8&node=332264011

what a lovely post, and a brilliant idea for a book. so pleased you are getting it out there. I love birds, and have long thought many of them far more intelligent than given credit for, the crow family, blackbirds, and of course parrots in particular. the wild parrots in Australia are such characters!