One of the greatest by-products of the electronic publishing revolution is being able to keep developing and refining a book after its initial birth.

The traditional publishing business model loaded most of the pressure onto publication day, with a possible second chance of breathing marketing life into the project when the paperback came out a year later. If your book didn’t float on at least one of those launch days then it would almost certainly sink beneath the surface within a matter of weeks. Copies might possibly be washed up onto the shores of a few libraries and Oxfam shops over the coming years, and not much else unless it became caught up in a freak rights storm in or as a foreign translation.

Now, however, we have more chances to get things right, more ways to keep a book alive while we try to work out the best way to alert potential readers to its existence and to tell them why they would enjoy it.

In other parts of the electronic jungle, such as on-line gaming, I believe they call this “beta-testing”, trying the product out on enthusiasts and specialists in order to check that it is good before launching it to the general market. I have found myself doing much the same thing with books, without fully realising that was what I was doing.

About 18 months ago I published my novella “Secrets of the Italian Gardener” via Amazon’s White Glove Service and United Agents. Sales were strong every time Amazon included it in a promotion and the book garnered around thirty good and thoughtful on-line reviews, (plus one troll, which seems a reasonable ratio). The signs appear to be good so I have now moved to the next stage, teaming up with the wonderful people at Red Door Publishing to create a beautiful hardback in the traditional manner, (although the POD paperback is also still available from Amazon, plus, of course, the e-book).

I commissioned a slightly refined cover from the same designer as before, Elliot Thomson of the Novak Collective, and Midas PR are working on the marketing. None of this would have been feasible five years ago and this is just one of the many reasons why I love what electronics have done for publishing. 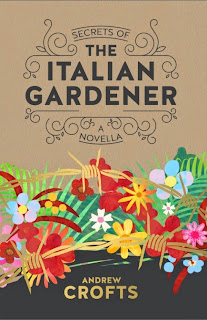 Enid Richemont said…
Lovely cover image, Andrew. Now all I need to do is to move to Tuscany (sigh...)

Lydia Bennet said…
that is a lovely cover Andrew, good luck with it. Interested that your publishers are happy with an amazon POD being also available.
27 May 2015 at 16:41