In celebration of the dark by Sandra Horn

After my last little rave about the Moon, I want to celebrate the Dark. Where would we be without the lovely dark? The moon and stars are always there, but we’d never see them. The Aurorae Borealis and Australis would go on casting their enchanting veils of coloured light across the poles, unseen. 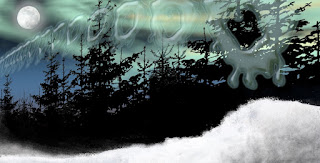 There would be no bats or barn owls, no other silent and slinky creatures of the night – and where would writers be without darkness to hide miscreants, lovers, conjure up ghosts?

I’ve always loved darkness, especially but not necessarily, when accompanied by cold. When I was a child, I was always being called in to put a coat on (Don’t want to! Not cold!) and I loved being out in the dark, star-gazing, playing with shadows, listening for owls. I used to walk round with my eyes shut in the day, sometimes, just to see where I ended up. I still do... My favourite holidays have been in early January, in Tromso, up in the Arctic Circle, where there was twilight for about four hours between 10 am and 2pm, and a long starry night all the rest of the time; Bern so we could go up the Schildhorn and walk on the glacier; Iceland to chase the Aurora we’d been in Tromso, again, and marvel at icicles as tall as a house. 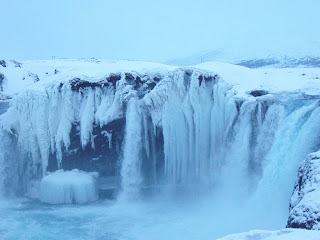 One of the delightful things about being a writer is that you can put your personal oddities to good use. My voice play ‘Persephone’ re-imagines the myth, setting it in a modern suburban street in which the adolescent girl is fascinated by the dark and by death, and is increasingly overburdened by her mother’s exuberant sun, sex and veggies lifestyle (she is the Earth-mother, after all). When the silent stranger on the motorbike holds out his hand to Persephone, she approaches him, half-willingly, and he snatches her up. Her life in the dark with him through the winter is a respite from all the things she struggles with in her mother’s world. The child she is needs to ‘die’ – i.e. separate herself from her mother and grow into her own unique adult skin.  That’s probably more than enough psychoanalytic blather.

Merry Christmas, everyone – and a happy, healthy, peaceful, creative 2016!

Lydia Bennet said…
I love the dark too, as well as bright day. We need them both! it's actually quite hard to find anywhere dark these days with all the light pollution. Suddenly seeing the Milky Way which has been there all the time behind artificial light unseen is an amazing experience. Merry Christmas to you too Sandra!
20 December 2015 at 19:45

glitter noir said…
Well done, Sandra. I must put my love of darkness into my work because I love the bright cool days of spring and autumn best. Merry Christmas!
20 December 2015 at 21:36