By Leverett Butts - December 23, 2015
If you've been following my posts for the last few months, you know that I am now embarked on another countdown. This time we're counting down the five best metafictional comics. These are comics that in some way deal directly with the art of writing.

Before we move on with the countdown, though, I thought I'd like to take a minute to explain the highly scientific method I employed to arrive at this list.

First, I approached a trained team of comic book scholars . . .

. . . and asked them for recommendations.

From this list, I eliminated the titles that were not applicable to my purpose (or that I had not read and were too long to skim over). I then chose the five titles that best fit my description of metafictional (in other words, the ones that I liked best). Finally, I presented my team of experts with my list and asked their opinions, eliminating any opinion contrary to mine.

Now, on with the countdown: 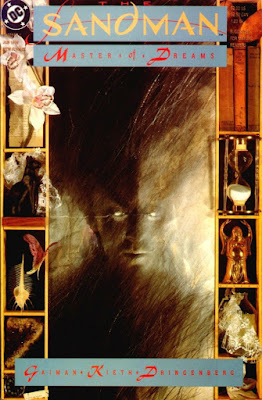 I could literally have put any Gaiman comic in this countdown since much of his plotting choices depend on a conscious consideration of how stories work. So often, Gaiman's characters either suspect or know outright that they are characters within a work of fiction. Even in 1602, which recasts the Marvel super-heroes as seventeenth century American colonists, the characters become aware that they are not "real" but characters who inhabit a made-up, alternate universe.

Sandman, though, as Gaiman himself puts it, is a story specifically about stories: where they come from, how they are discovered, why they exist. The titular hero is Morpheus, or Dream; he is one of the seven Endless: literal personifications of metaphysical concepts that have existed since well before the dawn of time. Besides Dream, there is Destiny, the oldest; Death, his younger sister; Dream himself is the third oldest followed by Destruction, Desire, Despair, and Delirium (who is the youngest and was first known as Delight before some untold tragedy drove her insane). They are the children of Father Time and Mother Night.

Throughout the run of the series, Morpheus interacts with mortals through their dreams, helping them to achieve their purposes (though not all purposes are good) and work out their problems, all while rebuilding his realm of The Dreaming which has fallen into disrepair after Morpheus was captured by a warlock and held prisoner for several decades.

What I like about this series as a writer, though, is the way it personifies the art of writing. Every story that exists or will exist inhabits its own alternate universe within The Dreaming. In fact, all books, past and future, written and unwritten, are housed within The Dreaming's library. More importantly, the muse Calliope (who presides over epic poetry) was once Morpheus' lover, implying that stories are the product of inspiration and dream.

Additionally, literary characters take on real form: Sandman's Lucifer, who grows tired of reigning in hell and opens a nightclub in America, is clearly the same character from Milton's Paradise Lost. The Faerie folk of The Dreaming are impressed with William Shakespeare's treatment of them in the premiere performance of A Midsummer Night's Dream, Puck going so far as to incapacitate the actor and play his role himself.

The series also takes fables and recasts them as history ("Ramadan," for example, in which Morpheus saves the beautiful and glorious "true" Baghdad by preserving it within The 1,001 Nights but replacing it in the real world with our war-torn Baghdad) and recasts history as fables (such as "Three Septembers and a January," telling the mostly true story of  Joshua Abraham Norton, the Emperor of the United States of America).

On top of all of this, Sandman (as well as it's numerous sequels, prequels, and spin-offs) is itself an exercise in alternative story-telling. While it begins as a fairly straightforward comic book set within the DC universe and featuring cameos from various DC characters both mainstream (Batman and Clark Kent, for example) and more obscure (such as Wesley Dodds and John Constantine), it quickly breaks away from comic book tropes and explores other types of narrative techniques. Some issues are little more than illustrated poems. Others illustrated prose stories.

All this in what was supposed to be a run-of-the-mill horror comic.

Wendy H. Jones said…
Brilliant post Lev, and you made me laugh as well. Entertained and I learnt something.It's a 10 from Wendy. Have a fabulous Christmas
23 December 2015 at 14:44