By Kathleen Jones - April 05, 2016
You might not think there's much connection, but after a fortnight of minding my grandchildren for the Easter holidays, I'm not so sure.  They are 6 and 2, so right in the thick of the target area for children's books and TV programmes.  Early mornings were a hazy memory of Miffy, Peppa Pig, My Little Pony, and Horrid Henry, with occasional excursions into the Dumping Ground and/or the curiously spotty world of Mr Tumble. 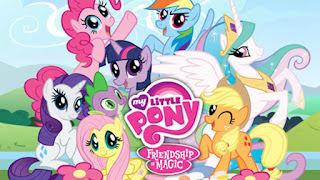 Evenings were a time for bed-night stories on similar lines. They all seem to have one thing in common, something that makes doing a bit of shopping in the local supermarket a risky enterprise - Merchandising!   When faced with tearful little faces at the check-out, who can resist £1.50 for two my little ponies complete with mirror, comb and hair-dryer (each one no bigger than my finger nail and lost down the car seat within minutes!)? 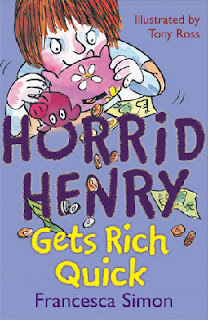 The Horrid Henry books have their own web-shop offering Horrid Henry T-shirts, games, Apps, stickers, toys, puzzles, CDs and DVDs as well as 'Horrid Henry - The Movie', birthday cards and oh, yes, books. It seems that books are not enough these days - if you're going to write for children you have to have at least one eye on the merchandising angle and I have it on good authority that those possibilities have a bearing on whether your book is going to be accepted by a main-stream publisher. 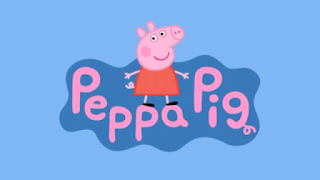 In the Newsagents, there were racks of magazines at toddler height wrapped in plastic, containing a huge selection of plastic toys and other objects, made in China and other third world manufacturing countries, and destined to hit the waste bin  or be scattered around the environment within a day or two.  They're all produced by the same culprits as spin-offs from TV and books and they end up in land-fill or washed down our drains into the sea.
In the same week, while I minded small people and swept up plastic fragments to chuck in the bin, the results of the necropsy (an animal autopsy) performed on the pod of Sperm whales that beached in the north sea recently showed that they died of starvation because they had stomachs full of plastic rubbish.  It really made me think.  If I'm going to be environmentally responsible, then I'm even going to have to think about the books my grandchildren read and the plastic spin-offs I'm going to have to refuse to buy.  And it made me think about Indie books - which come without plastic (many of them written by Authors Electric members)  and E-books that don't even require the sacrifice of trees. 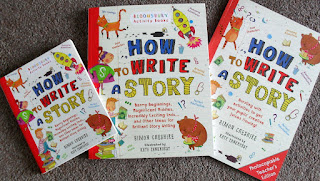 On a happier note, my 6 year old grand-daughter has just won a competition for a 500 word story. She wrote it after reading a Bloomsbury book by Simon Cheshire, called 'How to Write a Story'. - It's interactive and beautifully illustrated and a lot of fun.  In fact I found it quite useful myself, being a fan of 'Barmy beginnings' but not always able to think of them.   'Stories, the book tells infant authors, 'aren't just words on a page, because as you read those words the story plays out in your head, letting your imagination run wild.'

You are obviously never too young for Creative Writing, and though initially suspicious of anything that might try to restrict young minds and their ability to create stories, I was won over by it in the end. My grand-daughter loved it. And at least it didn't involve any plastic to clog up landfill or end up in a whale's stomach.

Kathleen Jones is a biographer, novelist and poet who publishes on both sides of the fence.  She blogs at 'A Writer's Life', is often to be found wasting time on Facebook, and Tweets incognito as @kathyferber

Her latest book is a memoir and travel journal - Travelling to the Edge of the World, available on Amazon.

What reviewers have said:-

'Travelling to the Edge of the World . . . touched me in so many ways: the instincts of the nomad, the desire for solitude, the landscape as a beating heart of a nation, of us all, our lack of care of the land, the destruction, the horrors of colonialism, the joy of art, the wonders of the ocean... Kathleen Jones reflects on so many of the questions we should be asking about our planet and how we live in it. Bravely personal - brilliant.'  Costa Award winning novelist, Avril Joy.

Wendy H. Jones said…
I hadn't thought of any of this. What a minefield. Love the sound of the book and congratulations to your Granddaughter on winning the competition. I'm impressed
5 April 2016 at 08:16

Dennis Hamley said…
A thought-provoking blog, Kathleen. You'll never stop the hucksterscynically fouling everything up. That's where I missed out, I think. No plastic Hares with waggly ears, no tiny medieval harps for Joslin de Lay, no Mickey Mouse gasmasks for Freddy. I might have been stratospheric by now! Wonderful about your granddaughter. And great to see the name of Simon Cheshire, once of this parish, appearing on our blogspot again. Great short story writer, great children's novelist, great critic, brilliant sense of humour
5 April 2016 at 11:32

Lydia Bennet said…
Lovely to hear your granddaughter is following in your footsteps! I think merch is quite nice for kids engaging with favourite characters. Heartbreaking about the whales. I feel sure a lot of the plastic in the sea is from plastic bottles of water, and there are huge numbers of them chucked off ships, thrown away at festivals world-wide, etc which could be recycled.
5 April 2016 at 17:25

Kathleen Jones said…
Thanks everyone! I hadn't really thought about all this until I saw how much junk these two little grandchildren generate. Do kids need more than books to enjoy the stories? Do we need to consume the planet and pollute it the way we are doing, producing things that people really don't need at all? I want authors to earn a decent living, so it's a dilemma.
5 April 2016 at 17:45