The amazing story of one man and his dog. By Ann Evans 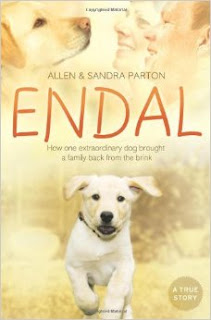 Thanks to the wonders of technology in being able to schedule blog posts, I'll be at the London Book Fair as this blog goes live. I'm going along with my good friend and fellow author, Karen King and I'm really looking forward to it.

Undoubtedly we're going to experience book overload! But the book I'm engrossed in at the moment probably won't be there, as it was published about 7 years ago. I discovered it not through any literary event or at the library, but at Crufts!

The book is called Endal, which is a true story written by Allen and Sandra Parton. Let me share the blurb with you, rather than trying to explain what the book is about.

Allen Parton suffered a serious head injury while serving in the Gulf War and returned home unable to walk, talk or remember most of his life. He couldn't even remember his wife, Sandra, and their two children. After five years of rehabilitation, he was still severely disabled.

Sandra was a nurse so thought she would be able to help her husband, but the Allen who had returned didn't remember her, and couldn't cope with what life had dealt him. Determined to be strong, Sandra would have top fight to keep her family together.

Endal was a Labrador puppy with problems of his own until he 'adopted' Allen and Sandra. He was to change their world, and give them back their family.


At the Crufts show back in March, the Hounds for Heroes stand was practically the first one we saw. I had heard of the charity, and as I'm always writing articles on dogs and dog charities for an on line magazine, I made a bee-line for it, eager to know more.

There were some military people there helping to collect money to fund the charity whose purpose is to provide specially trained assistance dogs to injured and disabled men and women of both the UK Armed Forces and the Emergency Services.

There was also a young woman on a bicycle clocking up the miles and raising money as people tried to guess how many miles she would cycle in the 10 hour stint that she was undertaking.

And there was a man in a wheelchair. He was Allen Parton, the founder of the charity with his dog E.J. (Endal jnr) the first dog to be trained under the auspices of Hounds for Heroes.

Allen, who was in the Royal Navy chatted to me about his life, the accident that put him in a wheelchair, and how this impacted upon his marriage and family life.

Back in 1991, Allen a Royal Navy Officer was serving in the Gulf when he suffered a traumatic head injury. After waking from a coma he couldn't walk, talk, read or write. His memory had gone – he couldn't recognise his wife, Sandra or his children. He had also lost the ability to feel any emotion.

Life could not have got much worse for Allen and his family, and they were at breaking point. However that all changed when a dog called Endal came into his life.

One day, around 1997 when Allen's bus didn't turn up to take him to the day care centre, he begrudgingly went with his wife to where she worked. She was a puppy walker for the charity Canine Partners.

While Allen who wasn't coping with the difficulties life had thrown at him, wanted nothing to do with the people there and the pups in training, one particular young Labrador who was lame in his front paw, decided to introduce himself to Allen.

Without any kind of encouragement, Endal came over to Allen's wheelchair and tried to get his attention. Ignoring the young dog at first, Endal was not giving up and decided to fetch items from the shelves at this small training centre, to deposit them, one after another into Allen's lap. Tins of soup and all kinds of things ended up being balanced on his knees as he sat in his wheelchair. Finally, for the first time in years, Allen smiled again.

The story then of how this amazing dog turned Allen's life around from misery and gloom to pride, and achievement is a truly heart warming story. It's quite clear that Endal was a very intelligent dog who understood what was needed, above and beyond what he was taught to do.

Over the years, the amazing partnership between Endal and Allen, earned him a variety of different doggy awards. After winning the Millennium Dog of the Year Award, which included a prize of £500, Allen donated that to Canine Partners. Before long Allen became a fund raiser for the charity bringing purpose to his life again.

Then in 2001 Endal was awarded the most prestigious of canine awards – the PDSA Gold Medal, the canine equivalent to the George Cross.

This was for saving Allen's life when a car backed into his wheelchair, knocking him to the ground before running over the wheelchair, knocking Endal in the process. Despite this, Endal tugged on Allen's jacket until he'd rolled him into the recovery position; dragged the blanket from the wheelchair over Allen as he lay there; retrieved his mobile phone from under the car; and when Allen didn't use it, ran to a nearby pub where he barked and barked until someone came and helped. Allen only discovered all this later after watching CCTV footage.

This life changing partnership that Allen had experienced with Endal starting him thinking about setting up a new charity to help the disabled of the Armed Forces and Emergency Services.

In an earlier quote he said: “It has been a dream of mine to have a charity that works specifically for these people who routinely put their lives in danger. Hounds for Heroes is our chance of giving people the same chance that I have had. We owe them a great debt and this is our way of saying 'thank you'.

Endal is such a heart warming read. If you want a really moving book to read, here's the link:

And if you want to know more about Canine Partners or Hounds for Heroes, here's their links.
https://caninepartners.org.uk/

Wendy H. Jones said…
This brought tears to my eyes. I was in both the Royal Navy and the Army and had never heard of this charity. I will certainly be looking out for this book and ways to support the charity
13 April 2016 at 08:59

Ann Evans said…
Thank you for your comments. Wendy the Hounds for Heroes charity only began about five years ago, so it's fairly knew. But such a worthy cause.