My Grandad was the kind of slow-moving, thoughtful countryman who never said three words when one would do. The family had been tenant farmers, but had, at some point, set themselves up as builders and plasterers. In the years leading up to WW2 there was no demand for house-building but there was for charcoal, so Grandad, his brother ‘Tub’ and son Pat took up charcoal making in the woods around Crowborough, high on the Sussex Weald.  Iron smelting using charcoal goes back beyond Roman times and you can still find traces of ancient bloomery furnaces here and there on the Weald. 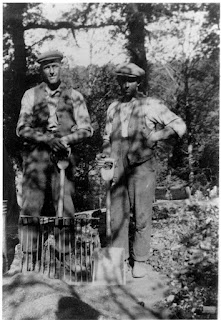 Charcoal making is a long, slow process in the quiet of the woods; a lot of watching and waiting is involved and there’s not much need for talk. It must have suited Grandad. First, two roughly circular hearths had to be cleared of scrub, leaf-litter and small trees, and then levelled. The petts would be built on them. The siting was crucial. It helped if they were reasonably close to a source of water and the stacks of seasoned wood they would use, to save too much hauling, but the most important thing was to keep them sheltered from any prevailing winds. Sometimes canvas screens would be used to make sure make sure that the air around the petts was as still as could be; a breeze could spell disaster if it fanned the glowing petts to flame and turned the precious charcoal to ash.
A stake would be driven into the ground in the centre of each hearth, and the wood stacked round it in concentric rings. The pieces of wood were packed closely together, on end, to form a wide circle. This was the base for more wood, placed on top and leaning slightly inwards, lweaving only a chimney space in the middle. Then the pett was dressed by packing straw and sawdust tightly between the pieces of timber and covering the whole thing with a layer of earth. The process was started by dropping a couple of shovelsful of lit wood down the chimney, which was then covered. 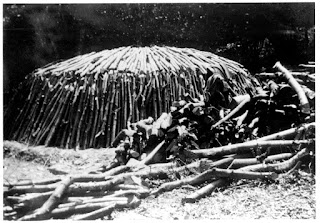 Then the long waiting began. The men could only guess what was happening inside the pett by the colour of the smoke and where it was coming from: first from near the bottom by the hearth, then gradually further up the mound until it died away at the top into a mysterious blueish haze known as the ‘lait’. 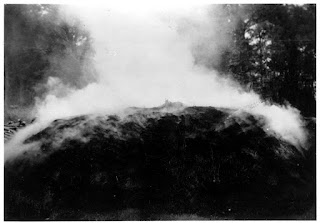 Constant watching was vital. The wind getting up or changing direction could strike through a small hole or thin place in the covering and cause a flare-up inside. If the hole was not plugged quickly with turf or earth, a fire could build up inside and the whole load would be lost. The men took turns to watch for hours at a time, over several days, while the pett shrank slowly to half its original size. The shrinkage was caused by water being driven out of the wood, followed by other intrinsic compounds such as tar and creosote. Finally, only carbon was left, perfectly preserving the original shape of the wood, like a black fossil. Then the pett was uncovered and the charcoal raked out and bagged up. It is used for a variety of purposes from artists’ materials, fertiliser, medicinal compounds and filters in certain industrial processes.
‘But what,’ I hear you cry, ‘has this got to do with writing?’ Ah, I was coming to that. There’s the preliminary gathering of necessary materials, the preparation of them, the long slow ‘burn’ while the hidden alchemical processes go on, and the final uncovering of the long-awaited finished product – all going on in one’s head rather than the woods - usually. Finally, there’s the strong memory I have of being taken by Grandad through the woods to see a pett with the smoke near the top, the memory of the smell of woodsmoke, the warm touch of his hand holding mine. I can conjure it now...except that, for him, the charcoal burning was over by the late 1930’s, and I wasn’t even born then. I must have created that image from fragments of narrative, the photographs I saw much later, other unrelated bits and pieces transformed by time and love. A shared alchemy: the making of charcoal and the spinning of tales. 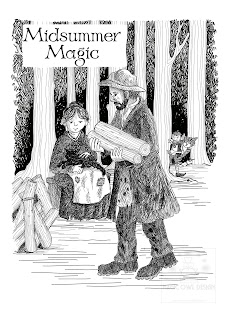 Jan Needle said…
Lovely stuff, Sandra, thanks. I was turned on to the great and wondrous mystery by one of Ransome's books when I was a kid, and really fancied growing up to be a charcoal burner, foolish child. Still use it, tho, in summer on the barbecue!
20 November 2016 at 10:03

Jan Edwards said…
Beautiful. Reminds me of the old boys I saw as a child around Horsham and Billingshurst.

Bill Kirton said…
Lovely, Sandra. And I think your 'fabricated' memory is totally legitimate. Sometimes, these recollections animate things that are otherwise totally elusive.
20 November 2016 at 12:54

Dennis Hamley said…
What a lovely post, Sandra. thank you. How lovely to have a charcoal -burner for a grandad. My two were both wheelwrights by trade, though one plied his craft in the Army. Jan, the charcoal-burners were in Swallowdale, weren't they? They looked after Roger who had sprained his ankle and got lost in the fog with Titty as they came back to Swallowdale after climbing Kanchenjunga. There is a magnificent recipe for a poultice which they make and apply to Roger's ankle. When I was a kid I wanted one like it applied to me but my mother said no way and bought something from Boots instead.
22 November 2016 at 10:46