(I did realise there was a US Presidential election happening as I wrote this but found nothing that I wanted to say. Perhaps, this morning, all I can do is re-direct everyone to Jan Needle's recent post The Rise of Ronald T Rump then go back to seeking solace from the trees. It's not enough of course.)

It’s November and the clocks have gone back and the nights are closing in and we’re heading into the dark time of the year. Every evening at five o clock Mum’s confusion intensifies and her mood plummets. You might think it couldn’t get much worse when most mornings she wakes lost and bewildered, resentful that she’s still alive. But it does: in the mornings I can find things to do (if she can summon the energy to do them) --  a walk or a poem or a song.  By early evening the last of her brain is tired and, when the light from the outside world is gone, even crooning a hymn often becomes too hard. Then she has no idea where she is or why she’s been abandoned in this strange new place.
I look back to last November when I could still drag her up the river wall to Goldenray to try and lift from her desperation (and when I began writing Beloved Old Age, to lift me out of mine) and I remember all the Novembers for the last five years, since November 2011 when Francis had his first back operation and I shattered my leg and we were laid up in bed in Essex while she, unreachable in Woodbridge, began breaking the backs of her books and arranging knives around her flat in bizarre signals of paranoia.  I’m probably glad I can remember that grim time because it reminds me what a blessing it is that she now lives 15 minutes not 55 miles away. I can’t take her to the river or the boats any more but at least I can be with her every morning and every evening in an attempt to offer companionship.

This is not necessarily fun. Very often - in the evenings especially - my role seems to be to provide a focus for her anger and fear. So much has gone from her intellectual capacity but there’s very little missing from her emotional range. Play my cards wrong and suddenly I’m both the audience and chief villain in a fast-moving unstructured melodrama of accusation, rejection and reproach. In the mornings she may tell me that she loves me but in the evenings she generally prefers the dog.
Dottie doesn’t try to reason or explain.  She doesn’t use difficult words (“Tupperti? I don’t know what you mean. What is this muck they want me to drink?”). Instead she hops neatly onto the sofa, curls herself against Mum's side (it’s a good thing Dottie was brought up by cats) and asks to be stroked. She thumps her tail randomly or gazes with her rich brown spaniel’s eyes as Mum confides her plans for both of them to run away, run away, run away… Pity, love and yearning are the feelings Dottie evokes and it’s a bad day indeed when she is ignored.

Remember remember, it’s November. The fireworks that sound like battle noise were blessedly distant this year but next weekend we must navigate the annual trauma of Remembrance Sunday. Among the many private resolutions I made last year was No More Parades: no war memorial services, no rockets cracking in the sky to mark the beginning and end of the two minutes silence, no more Last Posts, possibly no poppies.  We will go to church quietly, safe amongst our new country congregation and there’ll be none of the panoply of battle-field death. There were soldiers in Woodbridge, banners and bugles ... Mum doesn’t talk about The War so often now and it may be that those memories are finally shrouded -- but I won't be taking the risk.

It’s November. Remember it was two years ago in 2014 that Dr John Gerrard died. A sad autumnal death after six months of living as a ghost in his own life. It was at the end of November two years ago that his daughter Nicci and I actively commenced campaigning for the rights of family carers to stay with people with dementia in hospital – and for the rights of those people to have their carers with them. It’s been an extraordinary time and we’ve met some extraordinary people. Last month we held a conference. (Do read the booklet Voices or watch the videos on our site.)  One of many personal highlights was meeting Theresa Clarke a former nurse from Northern Ireland who lives with dementia but is determined to continue to contribute to our common world, to be involved and present in every moment until the darkness claims her.

“Make the most / Of that time / Savour those bright / With-it moments / When love and gaiety / Are to the fore / And be there when / The enclosing darkness / Draws ever closer.”


That's a verse from a poem which Theresa sent me to share with Mum. But I was the one who needed the advice.  The dead weight of all those other Novembers -- which I can remember and Mum can not --  was overwhelming me, not her. We were shuffling miserably through our morning walk, when she looked up to bright leaves against the clear sky and said "even oldies can still have this." The place where she lives now IS beautiful - it's not the beauty of the river and the sea but a cultivated beauty of park and lake and wide fields beyond. She is surrounded by trees who live beyond our human scale. They will shed their leaves, stand stark against the bleak cold and bud back in the spring. That's what I need to keep in mind. 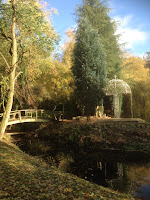 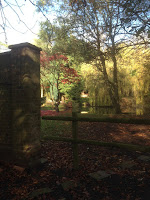 Yes, Julia. That's wonderful: moving, profound and necessary. Thank you. But I don't think I'll send it to my brother. It might wreck his present happiness.

Yet again, I can only echo what Jan and Dennis have written. These pieces are so sadly beautiful, so profound. They rise so far above the trivia which fill my own days. I wish you didn't have to write them, but thank you for doing so.

Jan, Dennis and Bill have said it all, Julia. I can only echo them.

Thank you for your moving elegy that evokes so many memories special to this fall season for me as well.

WE did better this morning - she was depressed and angry and ready for a row. A steady rain prevented walking BUT yesterday we were singing "Somewhere over the Rainbow" and today I bought my 1958 colour illustrated copy of the Wizard of Oz and now we are walking the yellow brick road without leaving the comfort of her sofa. Thank you L Frank Baum.

Thank you, Julia. You touch so many hearts with your writing.

Sorry I'm not there to help.... though Dottie seems to be doing a good job! I salute the quiet people, along with the dogs and trees, who just Get On With It (whatever 'it' happens to be). And all being well, it won't always be November. xx

What it must be to write such searingly melancholic words...cathartic I trust.

It's the greatest help, thank you. At the end of the day, if I write a diary entry, it relieves me. If it is a truly terrible day I sometimes write while I'm there and that keeps me steady. Writing helps me work out what I actually think and then, afterwards, it helps me stick to whatever remnants of idealism I'd managed to articulate for myself.
But it's important to note that this is not all bad days and perhaps there's an imbalance because when all has gone well I'm free to do something else and there's no pressing need to write about it. I hope the photos in this piece managed to put the +ve p o v. They should do. Being with Mum has certainly made me more receptive to the blessings of natural beauty.