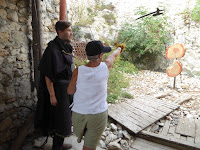 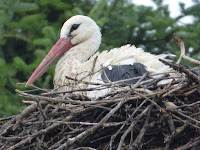 It’s always interesting going to see a place that inspired a book – but to have inspired a whole genre? Consequently, I’m not really sure what I expected from Romania. It wasn’t the axe-throwing (at which I was surprisingly good). It wasn’t the bear hide (Romania has the largest area of unspoilt forest in Europe).It wasn’t the wonderful food, where, however hard we tried, we couldn’t spend more than £20 per head on dinner – including drinks. The beer is really good, so good that I didn’t even get around to trying the wine. The ingredients are mainly organic from the surrounding countryside, and the cheese is exceptional. There are forests here; mountains, storks, swallows, and bears forsaking the reserves and begging for sandwiches at the side of the road… English is widely spoken, and the people are friendly and helpful. But of course, we were there mainly to visit castles.
Transylvania is, historically, the north-western province of Romania. Wallachia is the southernmost, and Moldovia the north-eastern one, and castles there are in plenty. The scenery is spectacular, and the hotels are good – but don’t expect any lifts. They don’t do lifts in Romania. It’s stairs all the way. 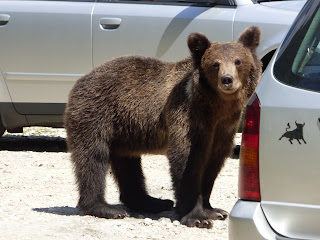 Dracula was an historical figure. Drac means dragon, and Vlad his father was a member of the Order of the Dragon, which was created to protect Christianity from the incursions of the Ottoman Empire. Adding ul to a word in Romania is the same as saying ‘the’, hence Vlad Dracul – Vlad the Dragon. Add an a on the end, and you have a diminutive – Dracula, son of Vlad, otherwise known as Vlad the Impaler (1431–1476/77). Both Dracula and his father were princes of Wallachia, which was the first stop for invaders from the East.Vlad isn’t regarded as a monster in Romania, as he really did stop the Turks invading. He’s a folk hero, and Vlad is a very popular name today. Our guide Christened his son Vlad. As a boy, Dracula was taken by the Turks as a hostage. Because he was royalty, he was well treated and well educated, and grew up speaking fluent Turkish which his captors eventually came to regret because he also learnt the art of impaling from them. On his return, he put that knowledge to good use. 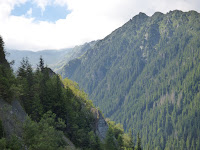 Impaling was a particularly brutal form of execution. A sharpened stake was inserted in such a way that it missed all the vital organs, and it took the victim several days to die. Dracula’s reputation for extreme cruelty was not without foundation – the invading army went home when they saw 20,000 of their comrades impaled along the side of the road. Vlad would be a spectator at these events, eating his dinner. There were many other stories of the terrible things he did, and it’s estimated that he killed between 40,000 and 100,000 people. Niccolò di Cattaro, who met Vlad, describes him as follows:
“He was not very tall, but very stocky and strong, with a cold and terrible appearance, a strong and aquiline nose, swollen nostrils, a thin reddish face in which very long eyelashes framed large wide-open green eyes; the bushy black eyebrows made them appear threatening. His face and chin were shaven, but for a moustache. The swollen temples increased the bulk of his head. A bull's neck connected his head to his body from which black curly locks hung on his wide-shouldered person.”
He was good material, and Bram Stoker immortalised him with his novel Dracula  This is how he describes him: “The last I saw of Count Dracula was his kissing his hand to me, with a red light of triumph in his eyes, and with a smile that Judas in hell might be proud of.” 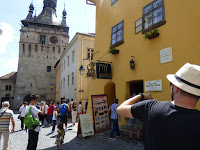 References to Dracula are everywhere in Transylvania. Dracula’s café, Dracula’s guesthouse, Dracula’s giftshop. And the castle? This is Stoker’s description: 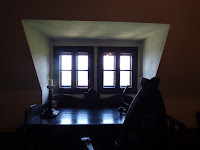 "The castle is on the very edge of a terrible precipice. A stone falling from the window would fall a thousand feet without touching anything! As far as the eye can reach is a sea of green tree tops, with occasionally a deep rift where there is a chasm. Here and there are silver threads where the rivers wind in deep gorges through the forests. But I am not in heart to describe beauty, for when I had seen the view I explored further; doors, doors, doors everywhere, and all locked and bolted. In no place save from the windows in the castle walls is there an available exit."
I think my photos tend to agree! 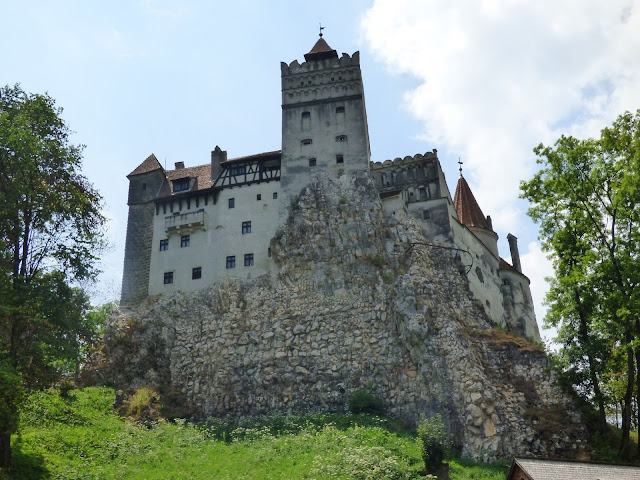 Chris Longmuir said…
Dracula was the first horror book I ever read and in my opinion has always been the best. I envy your trip to Dracula country. I've just realised it's on my bucket list and I've never done it. Good post Elizabeth, I enjoyed reading it.
17 November 2016 at 08:36

Anonymous said…
Aargh! Much scarier than anything Stephanie Meyer creates. But what a beautiful country. Really enjoyed this post, thank you!
20 November 2016 at 11:23