Shall I compare thee to a Sonnets Day? 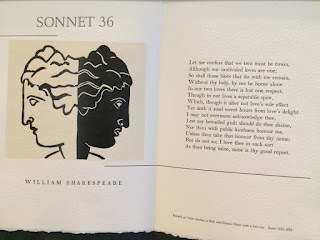 In these uncertain times, it’s good to be able to report that the Shakespearian sonnet is alive and well.  This was my conclusion after a delightful Sonnets Day at the Weston Library (the airy, austerely beautiful new wing of Oxford University’s Bodleian library) a couple of weeks ago.
By way of celebrating the 400th anniversary of Shakespeare’s death, the Bodleian decided to create a special edition of the Bard’s 154 sonnets, inviting letterpress printers from around the world to print a sonnet each in any style or language they chose. Sheets of widely differing sizes, colours, design, fonts and languages flooded in and are being collated at the library, and to mark the conclusion of this Sonnets 2016 Project, the Bodleian held a brief exhibition of some of these wonderful hand-printed offerings, many on handmade paper.

Earlier in the year, half a dozen Oxford primary schools took part in a Sonnets Alive! Project, run by writer in residence Kate Clanchy.  Pupils wrote their own sonnets, a selection of which were gathered in a charming letterpress booklet, magically titled I Feel That the Heart of June is in Me (the title of a poem written by Windale School pupils), hand printed by children from Pegasus School. Some of these contributions were read out by their authors and the quality was astonishingly high, showing an acute understanding of metre and some breathtakingly beautiful images. Even Oxford Professor of Poetry Simon Armitage’s warning in his welcoming speech that he planned to steal a few of these lines (and for praise you can go no higher than that) didn’t prepare me for gems such as

‘....I am the dawn when children
wake and see the pale sunrise piercing the shorn
shadows. I am the flame which yet burns on.’
(Flame by Jemima Webster & Khanh Pham). 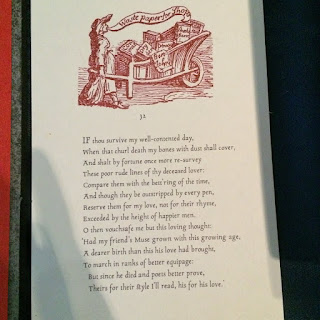 After the readings it was time to look at the exhibition, which included an enchanting Sonnet Tree: a structure hung with couplets, quatrains and full-length poems, all written by schoolchildren during the Sonnet’s Alive! workshops.  Here again, richness of poetic imagery, instinctive understanding of rhythm and metre, together with a positive revelling in Elizabethan vocabulary, showed just how much these young people had immersed themselves in Shakespearean sonnetry. As Simon Armitage wittily implied, with budding poets like these hammering at the door, the current generation of poets had better watch their backs. 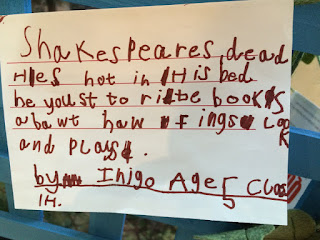 And Shakespeare’s own place in the canon? I defy anyone to put this more succinctly than 5 year-old Inigo.

Wendy H. Jones said…
What a fascinating project. I hadn't heard of it so thanks for bringing it to my attention. I love Inigo's attempt.
1 December 2016 at 07:11

Dennis Hamley said…
Griselda, how come I hadn't noticed anything about what sounds a wonderful occasion? it seems to have just passed me by. I would have loved it. How long is the exhibition on for? We'll have to get down to the old Bod quickly.
1 December 2016 at 10:18

Anonymous said…
Alas, it was a brief exhibition, just for one day! Once collated though, the entire collection of hand-printed sonnets will be available to view on request. Hopefully the Bodleian will also use them in future exhibitions. Thank you for all these nice comments and sorry to get your hopes up (gulp).
1 December 2016 at 12:28