One small positive in a world gone mad by Dennis Hamley

To start with, I must apologise for this being probably the most boring post ever put on the AE blogspot. It's all to do with the pictures. For as long as I have been posting, I have taken images off sites which specifically say 'images for' and copied and pasted them to the blog. They are specific to the topic of the blog and the text needs them. But apparently, Blogger has decided I'm not going to have them any more. Every time I copy them now, a rather curt warning notice tells me that I'm putting myself in danger. And when I try to call their bluff and preview what I've written, the preview just won't work. So I get rid of them quickly and it then it does. A great pity.

So this month I'm not starting with the blog itself. Last month I went on at some length about books I had managed to clear out of the way and in the comments, Sue Price gently but firmly reproved me for not providing links. Well, point taken and here they are. I know they should come at the end of the blog, but what the hell, it's getting late on December 27th, we leave early tomorrow for NZ and I haven't finished my part of the packing so this is turning into a rush job!

So here is the whole of my Joslin Books children's list, in paperback and ebook, with (at this stage, I hope) some colourful covers as well just to cheer things up a bit. And, glory be, the ban doesn;t stretch to simple images off Amazon! 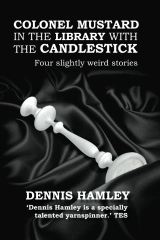 Colonel Mustard in the Library with the Candlestick: four slightly weird stories
https://www.amazon.co.uk/d/Books/Colonel-Mustard-Library-Candlestick-Dennis/1511682957/ 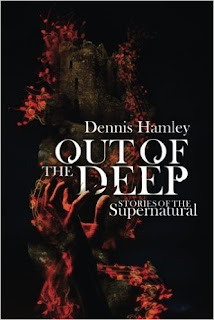 Out of the Deep: stories of the Supernatural
https://www.amazon.co.uk/d/Books/Out-Deep-stories-supernatural-Dennis-Hamley/151478940X

2. The Nightmares of Invasion
https://www.amazon.co.uk/s/ref=sr_gnr_fkmr0?rh=i%3Astripbooks%2Ck%3Anightmares+Dennis+Hamley

JOSLIN BOOKS is Dennis Hamley’s new Young Adult imprint for anthologies of stories, both new and previously published, and new work not intended for other publishers.

I'm horrified to see the ebook editions of Yan Tan and Nightmares  don't seem to be there. Well, I was told that Createspace's free Kindle service wasn't entirely dependable. They've worked well for me before this, but I shall do it myself this time, as soon as I can.

And now to what this blog was supposed to be about. Please imagine what the pictures might have been!

So much of this year has been horrible, so we cling on the seeds of hope wherever we can. And on Monday, December 12th, one little seed broke the surface and began to flourish. (Normally, I wouldn't countenance writing a corny image like that, but here it seems oddly fitting). On that day, the first train left the main station at Oxford along the old branch line to Bicester -  which once ventured westward to Verney Junction, Winslow and Bletchley and then, by devious means, wandered vaguely to Cambridge. When our train had left the sumptuous new station at Bicester Village (where the train announcements are in Arabic and Chinese as well as English), it left the old branch and headed along the new chord line which connects it to the main Birmingham-Marylebone line. Back on the branch, the new tracks carry on eastward and disappear tantalisingly just round the corner, hinting at new triumphs in store.

There's been so much spoken and written about the resurrection of this relic and its transformation into the new East-West route. After  Mr Grayling's insistence that the whole project is to be handed over entirely to private enterprise, one's enthusiasm could almost have been extinguished. But mine wasn't. For me, the first completed part of this great scheme, the new route from Oxford to London Marylebone was a profoundly significant  event. The tiny station in Marylebone was opened with such high hopes in 1898 as the terminus of the 'Last Main Line,' the Great Central. But it was doomed to failure from the start because other railways and, in British Rail days, former employees of these railways, had it in for the upstart from the moment it was opened. Even Dr Beeching never thought that the GCR and the Oxford-Cambridge branch should be closed. These were the decisions of vengeful bureaucrats. Where have we heard that before? They even wanted to close Marylebone at the same time as St Pancras in the 60s. Betjeman saved St Pancras. I often wonder who the unsung hero was who rescued Marylebone. It's sad that they couldn't stop the same bureaucrats from dumping the wonderful Doric Arch at Euston into an unmarked grave somewhere in the Thames Estuary so that nobody could ever resurrect it.. I want to see the railways renationalised - but please don't let anyone from the old British Railways Executive come anywhere near them.

So I feel that a wrong is being righted and honour will be satisfied. Besides that, lost kingdoms of my childhood are being rediscovered, because both routes loomed large in my early life. And now, at last, they are truly united.

No, we didn't get up in time for the first train on the new route. But my brother came over from Winslow to see what he and other Winslovians might experience regularly in a few year's time when half a century of railway-less life finally ends for them - including their own direct route to London, a circumstance which I would once have regarded as being as likely as dinosaurs clumping down the Aylesbury road .

Well, what did we experience.?

To start with, a level of experience which, though I love them, I just don't find anywhere else on the railways of Britain at the moment. Much more akin to the French model than First Great Western (I refuse to call them The Great Western Railway, as they are trying to make us). Clean, fast trains, smooth quiet track, two beautiful new stations at Oxford Parkway and Bicester Village. We didn't go far that day but we've made several journeys from Parkway to Marylebone, now our preferred means of travel to London, and found that if something does go wrong we're told what and why it is and an estimate of when things will improve. To put it in capitalist terms, the customer experience is good - better than the others anyway.

True, the main stock isn't brand new, Thirteen trains were transferred from Trans-Pennine, and refurbished especially for the new route, this fomenting a new Soft South. versus Deprived North row. But if you're lucky, you can get a ride on a Silver Train, taken over from the old Wrexham - Shrewsbury-Marylebone Open Access service, ruined and withdrawn when Virgin said they were a threat and forbade them to stop in Birmingham, this carrying on the old feuds. Now they provide the fast Birmingham trains and one a day, at peak hours, runs to and from Oxford. These trains are made up of ex-British Rail Mark 3 coaches, still modern,with a quality you don't find in, for example, Cross-Country Voyagers. They have been refurbished without the layout being altered to squash in as many passengers (or 'customers') as possible, so there is plenty of room, Each table with its facing seats fits in with a complete window.. The ride is smooth and quiet and the experience is like something expansive and restful from yesteryear when travel could be enjoyed properly.

So Richard went home to Winslow overjoyed with what he had seen. In a few years time (not even Mr Graying knows exactly when) regular trains will shatter the peace in the cutting under the Iron Bridge for the first time since 1967 and the miserable day of closure. A beautiful station just like Bicester Village or Parkway will rise up next to the Buckingham Road. And all shall be well, and all maner of thyng shall be well.

Good for you, Chiltern Railways, run by railwaymen and not business executives and bureaucrats. I never mind giving plugs to things which deserve them.

I hope everyone had a brilliant Christmas and is now settling down to a New Year which is already proving better than, as I write, we are now  all fearing.

And, just to remind you:

Try it. But try the first one first. And if you fancy saying a few nice words about them, I'll send you pdfs.

I've just bought Col Mustard in the Library. Hope your holiday was good

Hope your holiday was enjoyable, Dennia. Sorry about the images problem. I haven't run into it yet, but will be prepared. Now you've got me thinking, though, about my next trip on a train--one of the few great ones still remaining here: the Coast Starlight.

So agree with you about the Oxford Parkway - Marylebone line. I love cycling up there along the cycle track, parking my bike with ease (am now getting quite good at not hitting my head on the upper story of the bike shed) and finding a comfortable seat in the train by the window with a generous table and socket for my charger. Marylebone station is a world away from Paddington too - a bit of a walk from the platform but nothing LIKE the long trek from the infamous Platform 14. Oops, better not spread the word too widely or Parkway will be like one of those Best Secret Beaches in the colour supplements... It's a rubbish station, people. Don't go there. Cough.