'There must be a story in that!' by Sandra Horn

At the beginning of January, we were in Turin for a few days. On the first evening, through the (closed) hotel window and the traffic noise, I heard someone singing. It sounded awful. ‘There’s someone out there murdering ‘La Vie En Rose’, I said.
We came across the singer the next night. An African woman, crouched on the ground with a paper dish for contributions in front of her. Without the previous evening’s distortions, she sounded wonderful. A powerful voice with a Piaf-style raw edge to it. She was still singing the same song, and after she ended with ‘Alors je sens dans moi mon coeur qui bat, la la la la la la,’ she began all over again. We stopped to chat and make an ‘offering’. She spoke only French, no Italian, and we talked about Piaf and how much we had enjoyed the song. We parted with lots of blown kisses from her and ‘Je vous bennisse.’
We heard her the next night too, but didn’t see her. She was still singing La Vie En Rose, over and over again without pausing. I wanted to ask her how she came to be there; why she was singing outside in the cold, with such a great voice. We didn’t see her again, but on our last evening, I heard her through the hotel window – still the same song, three times over, and then suddenly something else. Impossible to tell what, but it sounded like a wild chant. I’m haunted by her, but PLEASE, everybody, anybody, DON’T tell me that ‘there must be a story there’! 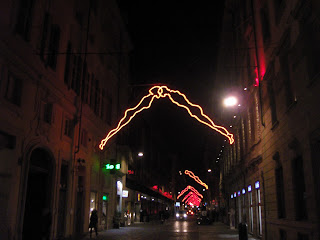 Here’s the thing: a friend sent me a link to a video recently, titled ‘Cat helps pregnant goat with contractions’.  She had added ‘there must be a story in that!’  How often do writers hear that from kind folk wanting to help with igniting a creative flame? The trouble is, and I could wish it were otherwise (sometimes), it doesn’t work like that, or at least, it doesn’t for me.
Scenario: I’m day-dreaming my way through, say, a field/forest/riverside walk/W.H.Y., perhaps with a story half-forming in my head, and along comes a dog with a wellington boot in its mouth. ‘Oh, look!’ says my companion, hopefully, ‘there must be a story in that!’  Nope. And the story I was musing on dies in that very moment.  Lost and gone as I’m jerked back into the here-and-now.  ‘You write it, then!’ I’m tempted to yell, but of course I don’t, because it was an offering, a gift, meant to help me, blast it! ‘Mmm,’ I say. I smile, make a non-commital chuckling noise, hope I look grateful, grind my teeth. Why, though? I don’t understand the deadening effect of these remarks. I don’t understand the creative process!
I don’t think it’s arrogance on my part. I hope not! It’s not as though most ideas are brand-new anyway – and I’ve rewritten old legends before, recasting them according to my liking, so what’s the problem with being presented with an idea by someone else? Why does it make me feel affronted – because the truth is, it does. 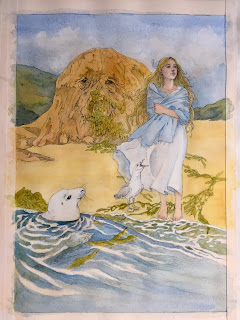 The Silkie, my version of the Selkie/Silkie legend

Once or twice I’ve managed to say, ‘It doesn’t work like that,’ if the offerer persists, wanting me to spin the tale right there and then, but I’d be at a loss to explain how it DOES work. Stories come unbidden. They well up from somewhere at the back, underneath, round the corner, I DON’T KNOW!  I only know they don’t come by command or by wanting. How much easier it would be if they did! ‘Oh, I think I’ll just sit down and write a family saga, a prize-winning picture book, a haunting epic of love and loss, a screamingly funny adventure story, an odyssey...
Ha!
Oddly, I can write poetry to call-outs. Not always, because the topic isn’t always engaging, but often enough. I suppose it’s because the invitations are fairly general – nature in mythology, ageing, animals, comedy – they allow plenty of wriggle-room, space to play. I’ve also written to commission with very tight requirements, though, so that’s not entirely it. Being commissioned implies some initial interest, I suppose, and willingness to work within the parameters agreed.  There’s time to think, ‘is this what I want to do?’ Perhaps it’s the suddenness, the breaking into one’s thoughts, that stifles the offerings of story ideas from kindly friends. I wish I knew!
African singer Authors Electric Blog creative process Edith Piaf La Vie En Rose Sandra Horn self publishing blog The Silkie Turin

Bill Kirton said…
I'm with you, Sandra, with one exception. I have a non-writer friend who twice, out of the blue, has said 'You should write a novel about...'
The first time it was '... a threat to an offshore platform'. He then gave me details of how platforms can be sabotaged. As a consequence I wrote Unsafe Acts.
The second suggestion was '... a figurehead carver'. He'd no idea why he'd thought of that, but I liked the idea and it resulted in The Figurehead and a sequel The Likeness.
With him, I know that, if I were stuck for a topic, I could ring, ask for an idea, and he'd come up with something I'd probably never have considered. It's strange but, so far, it's worked.
20 January 2017 at 10:00

Jan Needle said…
Once upon a time there was a european immigrant who serially married european immigrants and produced many children. He persuaded the people of America, who were all originally immigrants (except the hated and despised natives) that immigrants were a bad, bad thing, and should be stopped, especially if they were muslims, as he (falsely) claimed the president had been. Then one day - today as it happens - he became the president himself. Bloody hell, Sandra - you could make a story out of that!
20 January 2017 at 10:07

Fran B said…
I'm with you on the irritation factor of well meaning suggestions. Having, as all my psychometric tests - Myers Briggs, etc. - have said, 'an overdeveloped sense of responsibility', I at once feel I should be writing the suggested novel/story. Then I worry how I will find time to do so. Then I feel inadequate, a disappointment to my friend. Then I have a gin and tonic and forget about it!
20 January 2017 at 14:24

Sandra Horn said…
Yes, there are xceptions, Bill - I was thinking of those people who tell you 'there must be a story in that' and then look at you expectantly as if you could go into automatic pilot and think one up right there and then.
Jan, I was just going to do that! You've ruined it now.
20 January 2017 at 14:25

Andrew Crofts said…
I'm always delighted to have suggestions, as long as the suggester is willing to commission me to do the writing.
21 January 2017 at 11:44

glitter noir said…
In my experience, those who offer their advice or suggestions expect a percentage since they've done the 'hard part'--recognizing the idea.
21 January 2017 at 15:13