So, after twelve up-and-down (mostly up) years, the Clucket Press is winding down. This year, we will re-publish The Silkie with beautiful new illustrations by Anne-Marie Perks, using PoD. That will fulfil a promise I made to myself a long time ago. We also plan to bring out Rainbow! A colour-it-yourself picture book with glorious pictures by Bee Willey, and that will be it.  The other surplus books have already gone to Book Aid International and I can now walk round my workroom again. Hooray! 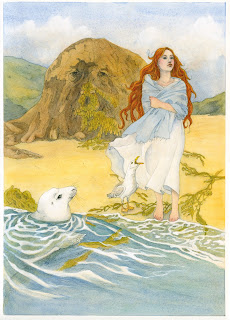 What now, then? Scary freedom... I may have mentioned before (ahem!) that I’ve always had a yen to be a poet. When I did mention it, and my shortcomings, someone responded that they thought poets were born rather than made. Gloom! Was I doomed, then? Wrong genes? Also, I’d once sent a tentative poem to a friend who is a well-known poet and her response was ‘Your gift is other.’ Boo hoo. But lately, thinking about it, what we are born with or without isn’t the be-all and end-all or many of us would be sunk at the moment of launching. There’s learning stuff and practising and getting it wrong and trying again, harder, isn’t there? Furthermore, while I’m getting up a head of steam, what is success? I’m not thinking in terms of a collection, a submission to the Forward prize, etc. Just to be able to capture that moment, that thought, that feeling, in a way that is pleasing and, with any luck original, and that makes people see it or feel it anew. At worst, for ‘people’ read ‘me’, although sharing and provoking reactions is a lot of the fun. Fun! Yes, in the middle of all this agonising I’d forgotten what a joy it is to write poetry. The first thing I can remember writing, as soon as I could write, was a poem. I’ve been doing it ever since, mostly just for the sheer enjoyment of creating something.  It can be deceptively easy to crack out a rhyme, a piece of doggerel, though, and I’ve done plenty of that kind of thing. Now I want to move past the ‘easy’ and into the challenging. How?
I came across the 52 Project, created by Jo Bell and guest poets. It is to write a poem a week, from prompts and ‘trigger’ poems, for a year. Not just to write, but to read lots of poetry too (no hardship!) and to spend proper time over it and stretch yourself as a writer. 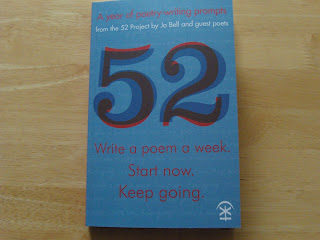 I roped in a writer friend as I thought if we both did it we could encourage each other to keep going and also act as critical readers. Here we are at week 8 and it has been much harder than I thought, but marvellous – not only am I writing regularly now I have more time, but it is spawning other unrelated poems as I work and some of the themes and prompts have resulted in two poems. The only downside is that it is a rush - NOT the way to do one’s best – but of course there is revision and re-revision and...etc.  Total immersion!
Because I’m a writer and that’s how a writer’s life is, I’ve submitted one or two here and there and had the usual complement of successes and rejections, but that is not what matters. It is the absolute joy of working hard at a craft and seeing the thing grow and take life under my fingers. It’s letting myself be what I want to be.  Yeayy!
52: write a poem a week Clucket Press poetry The Silkie

Ann Turnbull said…
I can really relate to this, as I've been doing the same myself - I mean, self-publishing some of my books, and writing poetry (I used to write poetry all the time in my teens, but very intermittently since). I have never asked anyone what they thought of my poems, but the other day I sent some off for a critique (from a stranger) and I'm planning to send one to my first competition. So, yes, that's how a writer's life is, as you say. Meanwhile I'm really enjoying not having plots and story arcs to worry about, I just tweak and tinker - mainly with haiku. And somehow the more you write, the more ideas come to you. Thanks for this post!
20 February 2017 at 12:50

glitter noir said…
Good for you, Sandra, in following your bliss. And it's cool that the road ahead is uncertain. You might just end up one day with a collection of poems. Or the discipline and joy of writing them may lead to new directions in fiction. Meanwhile, explore away!
20 February 2017 at 15:59

julia jones said…
I think this sounds marvellous and I wish you every success - in whatever form success may come
21 February 2017 at 12:43

Katherine Roberts said…
Love that idea of a poem a week! I write spontaneous poems in response to good days out, disasters, etc - I usually throw them away afterwards, but the act of writing them seems important. It's a way of expressing things from the heart and soul, and I wish you joy.
21 February 2017 at 14:18