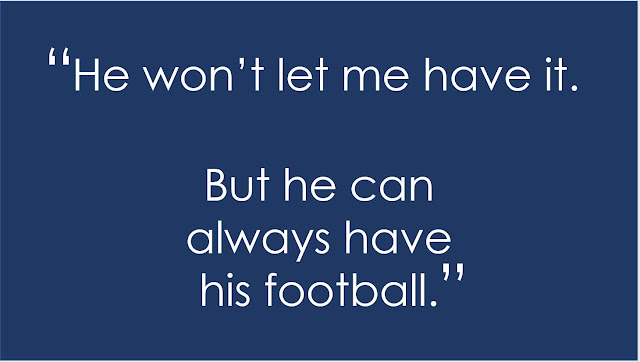 Spoken into a mobile phone by a young woman pushing a baby in a pushchair.


No idea what the 'it' was that he wouldn't let her have. Or where she got this strange idea that 'he' could stop her from having it, whatever it was. But she let everyone within earshot know about it as she passed. There's the start of a story here.

I overheard this in a pub. No surprises there. The speaker stood nearby, trying to hide his phone in his jacket and mutter into it, but growing louder and more impassioned as he went on. I may not have all of the conversation word for word but I have the gist - and he really did say, 'You Jezebel.' I know because, when he did, Glenfiddick came down my nose and the waste of good whisky has engraved it forever on my heart.
It's cruel, I suppose, to make a mere blog out of his heart-ache - but aren't we always making use of other people's - and our own - heartache? If you haven't got that core of ice in the heart, don't become a writer.
And it was his choice to hold the conversation with Jezebel in public. He could have had the conversation elsewhere. For my part, I couldn't not hear and I couldn't even move away because the pub was so crowded. And, yeah, right, of course I would have moved away if there'd been more space. The late Patrick Campbell said that his aunt would often shush him in public because she was so intent on listening to the conversation in another group. And he himself, he admitted, was so given to eavesdropping that his elbow would be almost on another party's table.

I'm also reminded of Joe Orton, a writer I greatly admire. The people in his plays say things like, "I had no idea our marriage teetered on the brink of fashion." (Said by a woman on discovering her husband dressed as a woman.)  And, "Every luxury was lavished on you - athiesm, breastfeeding, circumcision. I had to make my own way."
When he was accused of writing stylised, unrealistic dialogue, he denied it. Listen to people, he said. Listen to the way they actually speak, at the bus-stop, in the shop-queue. He reckoned that he wrote very realistic, everyday dialogue.
It's not only a great waste and pity that Orton was murdered at so young an age - it's absolutely tragic that he died before the invention of the mobile phone, which would have given him so much material to work with. 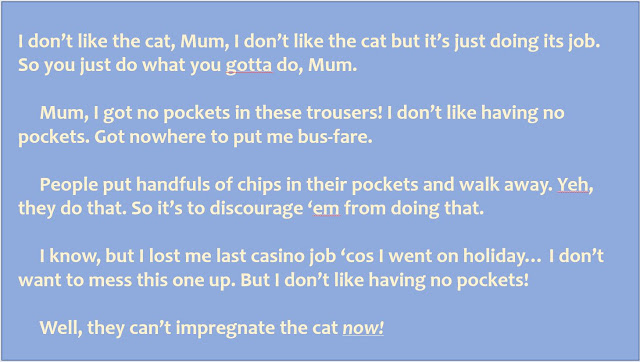 The above was overheard, just the other day, in a bus-stop. I never got to hear why the cat couldn't be impregnated now ('tho I was agog) because the bus came and interrupted the conversation.

You could mix the characters together, fit them all into the same story. Is 'Jezebel' the young woman with the pushchair, after she's got fed up of not being allowed things? - But that's easy stuff. Who owns the cat and why can't it be impregnated now? What is the cat's job and what is it that Mum must do because this dislikable cat is doing its job? Somebody, please, make up an explanation.

But since technology isn't everything, here's a couple of traditional earwiggings of the kind that Patrick Campbell and his aunt enjoyed. 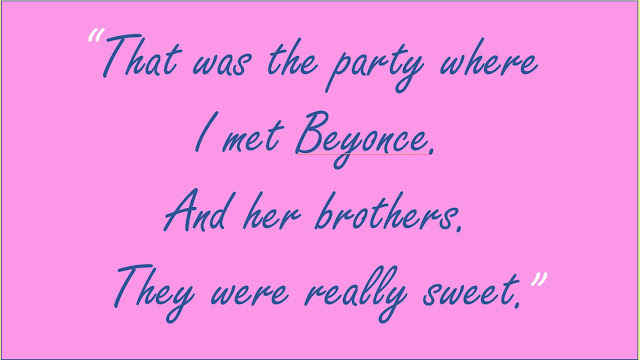 The above was overheard in the bar of a rather posh London hotel (well, posh for me anyway) where I was attending some Royal Literary Fund do.
And, below, overheard one late night, in a bus-stop. 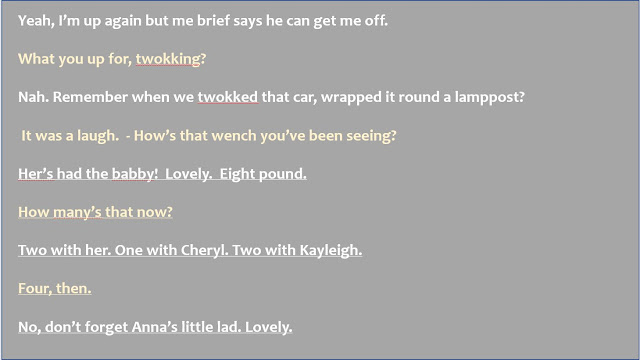 Mix them in with Jezebel, her ex, pushchair girl, the young casino worker, his mum and the cat. I challenge you.

I think Orton would have appreciated the politeness of the exchange - politely enquiring what's going on in the friend's life now, reminiscing a little about past shared experience, and politely enquiring about the friend's family.
And, as Orton himself said, "It's all any reasonable child can expect if the dad is present at the conception."

Susan Price is a writer for children and Young Adults.

Her book, The Ghost Drum, won the Carnegie medal.

Bill Kirton said…
Loved it, Susan. You obviously share a talent with Alan Bennett for being a great eavesdropper. I obviously don't get out enough. I'm grateful, though, for the challenge you set. I've been casting around for a topic for my next contribution here and now I have one. Thanks for that, and for the laughs.
25 April 2017 at 10:43

Anonymous said…
I clearly wait at all the wrong bus stops. This is priceless, please please do a lot more eavesdropping and share it with us. Am left with glorious images of a conscientiously fecund cat - alas, fecund no more - people stuffing their pockets with chips (with or without salt and vinegar) and the sublime mental arithmetic abilities of a far from conscientious yet distressingly fecund human. ROFL as I'm sure Joe Orton would have said.
25 April 2017 at 11:13

madwippitt said…
Blimey. I'm keeping my gob shut in public from now on! :-)

Susan Price said…
Griselda, I had the same thought as I sat in the bus-stop (staring into the middle distance in a vague, unlistening way but with ears out on stalks.) I thought he meant people were stuffing fried potatoes into their pockets and imagined hot grease running down their legs.

Looking forward to your next, Bill - and yes, Karen, a habit of eavesdropping does tend to make you keep silent - if only the better to hear what the people behind you are saying.
25 April 2017 at 22:02

Katherine Roberts said…
Made me laugh! It's true people talk about all kinds of personal things out on the street that I'd have hesitated to bring up behind closed doors at home. Me, I'm always trying to imagine what the person on the other end is saying... once, I assumed someone walking behind me in town was talking to me, so I turned round and answered... only to get a startled look from a stranger on a mobile.
3 May 2017 at 19:37