This month has been all about downsizing, which for 90% of writers that I know is a slow and painful parting of the ways with a small section of their book mountain at very least.  The Edwards-Coleborn household is attempting to relocate to somewhere easier to manage and  one of the inevitable consequences is that some of our carefully amassed volumes are going to have to go – but which tomes will be destined for the chop? (illo on left not my study - but not unlike!)
We’ve been whittling away at the shelves for some weeks now with some (limited) success, and I have noted at least ten phases of book sorting - as follows:
·         One : the easiest part – mainly non-fiction that is used less  and less as we turn to the internet for those morsels of information - items of day-to-day research requiring urgent answers. Things such as the composition of  powder applicators in a 1930s handbag compact; the exact week that a popular  radio show began to be broadcast in 1940; the specifications or a particular shotgun.
·         Two :  perfectly good books that you have never read and know you are never likely to read; either through lack of time or lack of inclination. Those titles you know you ‘should’ read because they are books of note, but which look so desperately worthy or just aren’t your thing (see phase three).
·         Three : review books. A fairly large category for this household because with both Peter and I having been Reviews Admins for the BFS has meant the receiving of vast quantities of hardback books. Despite it being six years since I stepped down from the post, and frequent emails saying so, once you are on those lists you are, apparently, on them forever. The quantity does decrease after a time but sadly, as the years pass, you only seem to be sent the books you don’t want to read – classic sod’s law!
·         Four : books that might fetch more than a pound or two and you keep telling yourself you will get around to ebaying someday.
·         Five : (getting trickier)  books with a built-in guilt factor – the signed copies! When they are by authors long passed; writers you only know in passing; writers who are well-known but whose books have little resale value because so many were printed at time of publication.  Once you’ve checked they really aren’t fetching more than a pound on second-hand sites, you are pretty safe to dispose of them undetected.
·         Six :  books you’ve read, and quite liked but won’t read again, and only kept because you are a packrat who can’t bear to part with any book if at all possible.
·         Seven: the small handful of signed copies by people you do know, but which are so totally out of your comfort zone that, if you are totally honest, you may never get around too.  (Own up - we all have them.) These titles waiver between keep and clear because you know you want to keep them, and there ‘might’ be room.
·         Eight : (reaching keep at any cost territory here)  those books you have read and enjoyed, and fully realise you may never have time to read again, but somehow can’t bear to part with.
·         Nine : books by friends; books deemed to be classics; books you had as a child (or in several cases in my collection, books that belonged to my father as a child).
·         Ten :  (the largest pile of all – many if not most of which also appear in #5 to #9) those books that have blown you away for whatever reason; those absolute keepers that would need a relocation to a bedsit for you to warrant dislodging them from your vice-like grip.

Of course the term downsizing is open to interpretation. It goes without saying that many of the excommunicated volumes from #4 on to #7 will be relegated to the garage at the end of the move where they will sit for the next ten years or more, (I can vouch for this as I  have many boxes of books sitting in the shed from my last move ten years ago). many of those will doubtless have be re-absorbed into the library – because, hey, its a book and why would you ever want to give it away?
*** 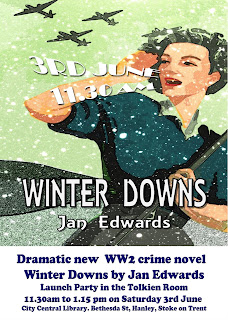 Jan's crime novel Winter Downs will be launched at 11.30 am on 3rd June 2017 in the Tolkien Room at City Central Library, Hanley, Stoke on Trent.  Tea and cakes 1940s style!  All welcome! Come for the cake – buy the book!

*Go to Jan’s blog page and sign up for her newsletter before the launch for a chance to win a copy of Winter Downs.*
*Go and enter the Goodreads giveaway of Winter Downs*

For those who can't be there it will be available through the usual online sources in both paper and ebook formats and there will be an online launch to follow.

Other Jan Edwards titles in print (all available in print and eformats) Fables and Fabrications;  Sussex Tales;  Leinster Gardens and Other Subtleties

I went through the same steps two years ago, due to a planned move that never happened. So since then the book numbers have crept up again. At least this time all those coming into the house have been read and some have even made it back out of the door and into the local charity book shop.

My sentiments exactly! Our biggest issue is review books - unasked and unread - but some of them have still been in the collection for decades :-)

Oh OUCH! SO spot-on for me. A leak in my roof (fixed today) plus antique wiring (think Science Museum) and then the books. I have a one-off published version of my first children's novel, THE TIME TREE, made just for me, leather-bound, end-papers etc etc which my daughter will inherit - no idea how much it might be worth. I have my late husband's carefully curated collection of Science Fiction and Fantasy, and I am its custodian, which I take very seriously. So yes indeed, this resonates with me.

Trouble is I would much rather keep them all :-)

It's so difficult! I had a real purge a few years ago, but somehow they sneak back in... with me, it's paperback fiction that goes straight back out the door after I've read it. I tend to keep the non-fiction, because many of mine are specialist books that you can't buy any more and that contain a lot more detail than can be found on the internet (they're historical, so don't really go out of date!).