By Griselda Heppel - May 01, 2017
Why do we tell stories?  That’s easy – to entertain. To lull our children to sleep. To give people a way of occupying their minds on long plane journeys. And, of course, to make a living, if you happen to be the writer of that novel picked up in the airport bookshop.

It’s not as simple as that, though, is it? Because if you’re a writer, you can’t help writing, whether or not your stories ever get published. The urge to tell and listen to stories goes deep into our psyche and is common to all human societies, no matter how ancient. 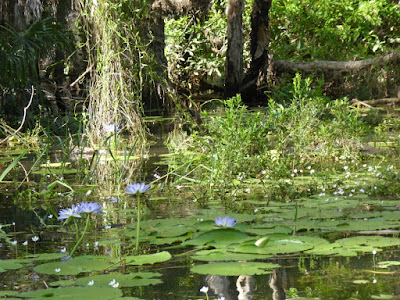 This was brought home to me forcefully – and wonderfully – on a recent visit to Arnhemland in the Northern Territories of Australia, a region of 37,000 square miles which has been returned by the Australian Government to its Aboriginal owners, the Yolngu. To visit this beautiful, wild (and very humid) landscape you need a special permit; or you book, as we did, with the only safari company allowed to operate there.

Our guide took us on boat rides through the Cooper Creek billabong, gliding through powder blue water lilies under dense sawpalm forests and swamp paperbarks, past fields of wild rice, 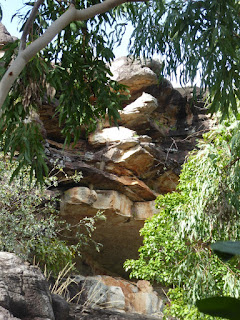 landing us in places where we scrambled through thick grass and over stones to vast overhangs in the rock face, shelters frequented by Aborigines for thousands of years.

And wherever they stayed, there are rock paintings: figures of men and women, spirits, birds, wallabies, fish, serpents – shapes delineated not separately but on top of each other, the same surface used over and over again with older layers of yellow and terracotta-coloured ochre fading under the more recent (still in terms of hundreds of years!). 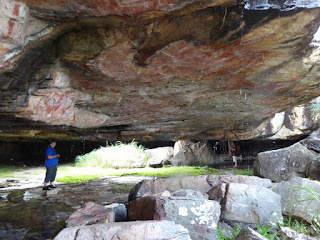 This is because the paintings weren’t made for their own sake: they were done to illustrate stories. The man (art was strictly a male thing) telling the story would draw as he spoke, as if the rock face were a blackboard – and the teaching image that evokes isn’t far from the truth. Adults and children may have enjoyed the stories but that wasn’t their primary purpose: as Roberts and Parker put it in their book Ancient Ochres: The Aboriginal Rock Paintings of Mount Borradaile, ‘Dreaming stories... explain and enshrine all patterns of living and behaviour, from codifying domestic and inter-clan socio-economic arrangements to delineating what is edible.’ 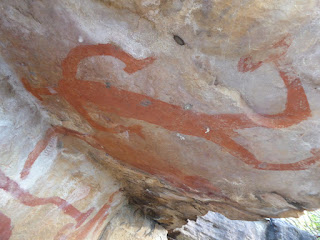 A scary story about the Rainbow Serpent, for instance, woken from his sleep by the screaming of a hungry child, whom he promptly devours along with its mother and the rest of the clan, highlights two important lessons, according to our guide. First, when moving around the land gathering food, it’s good to be as quiet as possible; second, mothers need to give their children plants that will satisfy their hunger, not cause them to cry more (as was the mother’s mistake in the story).

Sadly, apart from a magnificent representation of the Rainbow Serpent on this overhang (clearly an important painting, since – uniquely in this area – it bore not a trace of other story tellers’ drawing over it), we found no illustrations of this particular legend. Though if there had been, we wouldn’t be allowed to see them anyway, since Aborigines are careful about giving away cultural secrets. They don’t mind our seeing these historic drawings because we don’t know the stories that go with them. Without the words, the images mean nothing.

Well, they knew a thing or two, these ancient peoples. While literary critics down the ages argue over the ‘moral obligation’ question, whether the purpose of stories – children’s, especially – should be to foster virtue and good behaviour in their readers, for the Aborigines, there were no two ways about it. Stories carried a vital lesson about survival in their environment: listening well could make the difference between life and death.

If that isn’t a ringing endorsement for the writer’s and storyteller’s art, I don’t know what is.

Wendy H. Jones said…
Love this. I feel like I've travelled vicariously and the story behind the story is great. Thank you
1 May 2017 at 08:23

JO said…
I love ancient stories - and have become very interested in creation stories in different cultures - in New Zealand the creation has its origins in earthquakes and volcanoes, in Australia it somehow grows from the land, in one African tribe the world began as a plate balancing on the back of a buffalo ... so every culture has developed a creation story that makes sense in the light of their geography.
1 May 2017 at 08:23

Anonymous said…
So glad I've made you feel you were there - what a lovely thing to say! I found it an extraordinary place and would love to go back. And so true about all cultures explaining their existence through stories that match their environment. Fascinating.
1 May 2017 at 21:43

Umberto Tosi said…
Thank you for telling this story and taking us on this fabulous journey through time and narrative space!
2 May 2017 at 07:58