Women writing for the theatre by Sandra Horn

I’m a member of Juno, a women’s theatre group based around Salisbury, with a brief to work at correcting the gender imbalance in theatre.
Juno’s reach is mostly in Wiltshire and Dorset and I’m in Hampshire, but I just sneak in under the ‘within 30 miles of Salisbury’ rule. We are mostly writers, but several members have performance and directing backgrounds too. We make a lively contribution to Salisbury Fringe Festival – somehow not quite part of the ‘official’ Fringe, but there all the same, putting on our own shows alongside it. ‘Little Red Ella and the FGM’ was one such production. Several of us are also working on projects celebrating women in WW1 at present. We run workshops on writing for the theatre: site-specific, non-natural, political, comedy, for example. I’ve learned a lot.
Our most recent venture has just been on at the Marine Theatre, Lyme Regis – a lovely little jewel of a theatre with nautical-themed loos! Fellow Juno member Christine Diment had run a comedy-writing workshop there for local writers, with the title ‘Women Are Funny Creatures (Too).’ The day resulted in eight scripts , seven of which were performed script-in-hand in the theatre.
We offered mentoring and divided the scripts between three of us. I read three of the scripts and gave what advice I could to the writers. Two were very clever and funny and just had a couple of technical things to sort out: how is a child going to pick up and carry off a grown-up dressed as a ladybird? How is the man supposed to speak his lines while ‘cramming his mouth with sweets?’
The writers responded by dealing with these questions with ingenuity and style. Sadly, the third script was unperformable even if we’d had full scenery, props, etc., as it would have been incomprehensible to the child audience it was aimed at. Tactfully, I pointed out some of the more obvious problems and sent it back for revision. It was re-submitted unrevised...
Had the writer made a mistake and sent the wrong version in? we asked. No, she had not. She responded by withdrawing the script. Her choice, but how sad to lose the chance of a performance at what turned out to be a cracking evening, the theatre crammed full with a very enthusiastic audience. 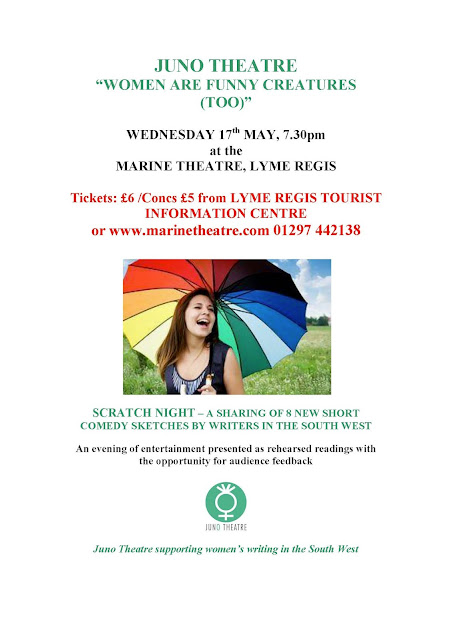 I expect we’ve all been there – the tricky negotiation with editors and the like, who want changes that we feel will compromise our vision for the work. I’ve usually been on the other end, arguing my point of view – and not always successfully, it must be said, so I feel for the script writer but am somewhat irritated with her at the same time. I don’t suppose many of us have just sat down and written a masterpiece first go, with no need for revision. When I was a child, I just wrote ‘stuff’ – whatever came into my head – stories, poetry, song lyrics – easy peasy! I was praised; clever little girl! It was a long, hartd, rocky road to finding out that ‘clever little girl’ didn’t automatically translate into ‘writer’; that there was a craft and an art to be learned and practised and polished and improved.

Still, we had a blast with the remaining playlets. One cheeky (ahem!) monologue put the ‘arse’ into Arsonist’; another play involved ladybirds manning a border crossing into ‘Trumptonia’; there was a worm-turned wife who watched her husband scoff her bag of ‘sweets’ before telling him they were her HRT pills; a man with a lost, nameless, gender-confused dog – all very delightful. Best of all, so many of the writers are now enthused and determined to go on, including a group who wrote their script together and can see the benefits of going on doing just that – absolutely in the tradition of comedy writing!
I’m back from Lyme Regis for something under 24 hours; off in the morning on a two-day poetry workshop, hoping to learn, to improve...
Authors Electric Blog comedy Juno Lyme Regis Marine Theatre Sandra Horn self-publishing writers women writers workshops writing for the theatre

JO said…
I love workshops like this - though in my experience there is always one person who can't see that changes might make their work even better. Glad it was so productive for the rest of you.
20 May 2017 at 08:52

Bill Kirton said…
Lovely post, Sandra. More than any other type of writing, that intended for performance HAS TO BE a collaborative venture and writers who don't accept that won't get very far. Beckett was a stickler for having actors follow his stage directions to the letter but, even then, it's hard to imagine Rik Mayall and Adrian Edmondson's Vladimir and Estragon being the same as Ian McKellen and Patrick Stewart's. Your own remarks make it obvious that the isolationist writer was depriving herself of some great experiences, lots of fun, and the opportunity to grow as a writer.
20 May 2017 at 11:40

Enid Richemont said…
Wow Sandra, you are impressive! Would love to meet up with you again in London, if you ever come this way, and do check out my daughter's Fringe company: Pipeline, which has also been doing some amazing and very successful stuff around the country, including selling a production to South Korea.

Umberto Tosi said…
Wish I lived nearby so I could catch one of these performances.You'd fit right in here in Chicago, a city abuzz with theaters and dramatic workshops.
20 May 2017 at 23:51