The power of words by Sandra Horn

The power of words, eh? I’ve been thinking a lot about it lately, partly because of Jo Bell’s ’52 poems’ challenge (I promise to stop banging on about it in about six months). There’s been a lot of struggling to find the most precise and satisfying way to express my response to each challenge – first things, weather, a celebration, a letter, a famous person, and so on. I was moderately happy as I wrote each one, but looking back over them has put a big dent in that. I am managing to say what I want to, but it doesn’t come near the poetry I admire. If poets are born and not made, I’m genetically deficient, but as I’m pig-headed (unofficial motto of Sussex: I wunt be druv) and I also believe that working at something can (sometimes) overcome such deficiency, I plough on. My ‘famous person’ is Nelson Mandela and I’m writing about ballroom dancing on Robben Island, which is an image I’ve always found inspirational. It’s coming slowly! Another recent effort, ‘a letter’  was to Alice Oswald, in which I used the Greek word chrysopoeia.  It comes from alchemy and means the transformation of the base or everyday into gold. It started me thinking about all the other words of power and music and evocation – all the magical things words can do.

I raided the poetry book case for some well-loved pieces to sooth and uplift. Oswald’s ‘may I moften wake on the broken bridge of a word, like in the wind the trace of a web.’

M.R. Peacocke’s heron ‘drawing behind him a long wake of solitude’; Ted Hughes’ ‘woolly-bear white, the old wolf is listening to London’; Eiléan Nί Chuilleanάin’s , ‘you look down where the high peaks are ranging, you see them flickering like flames -  they are like a midge dancing at evening’. 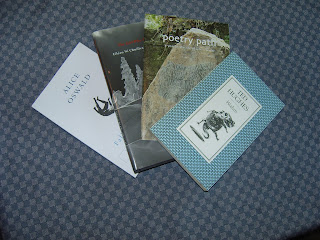 Shiver! I went on and on.  I was high! Off on a riff about the positive power of words -  until an incident at a series of writing workshops I attended. They were led by four different facilitators, all of whom gave us exercises to do on the spot and plenty to think about and work on for later. All good.  But then there was one who introduced herself as a journalist -  ‘a tabloid journalist’ she said, with a bright smile, as if proud of herself. Something in me shrivelled. I was there to work and learn so I carried out all the instructions she gave us, but when it came to the invitation to share what we’d written, I couldn’t. Not with her.

She’d had us working on quite personal stuff, but it wasn’t that – nor did I expect to find our revelations splashed all over the ‘newspaper’ she worked for.  It was that it brought back to me, painfully, an event from the past I hadn’t thought about for a long while.  Neighbours of ours, an unassuming family, had made the most enormous sacrifices to send their son to a very prestigious fee-paying school.  Mad, perhaps – not my business.  At some point he was expelled for bullying. It was devastating for them all. Worse, it was soon in the tabloid press and their minions were outside the house, going through the bins, trying to get them and their neighbours to talk... Their modest semi with no garage and a tiny front garden became ‘£300,000 house’ (which sounded much more impressive then) and they were presented in an unrecognisable way to anyone who knew them.  How did it happen that this personal tragedy made the tabloids? Apparently they have people hanging around places like public schools etc. offering money to anyone associated with them for juicy tidbits, which they then present, suitably distorted, to their avid readers. Words used to destroy people, vilify them, make them into fodder for the ignorant masses.  We’ve all seen them lately.  The power of words...

Bill Kirton said…
Beautifully put, Sandra - both in the shivery examples of poetry';s magic and the mistrust of (contempt for?) those who abuse language to distort or, worse, invent truths. I remember when my younger daughter started her career as a radio journalist and was distressed at having to ask questions of families who'd lost children in accidents and so on. She's naturally a caring, empathetic person and hated it. The trouble is, some of them seem to relish it.
20 June 2017 at 10:26