The Novella by Bronwen Griffiths


I’m a sucker for novellas. I always seek them out in the bookshops, although they are sometimes hard to locate, their narrow spines often lost between the thicker books on the shelves. Once popular, the novella has languished in the past few decades and it was difficult, as a writer, to sell a novella to a publisher or agent. But, today the novella is having a bit of a revival. Some American magazines will accept novellas, Bath Fiction recently had a competition for the novella-in-flash and there are now small publishing houses, such as Peirene Press in London, who publish novellas in translation and Melville House in the USA.

What exactly is a novella? It’s a short novel, yes, between twenty and forty thousand words - long enough for a reader to inhabit a world but short enough to be read in one sitting. But it is much more than that. A novella tends to focus on one view or one voice, highlights one feeling and portrays one psychological human trait. It zooms in on one aspect of a story. It provokes us to think and use our imagination.
The novella is – at least it should be - an intense experience, like watching a movie.  There’s a strong resemblance between the screenplay (twenty thousand words) and the novella. Both operate within the same constraints of economy—there’s space for a subplot (possibly two but no more), characters are established with quick strokes but are allowed room to live and breathe, and the central idea, even if it is just below the horizon, always exerting its gravitational pull.
‘There’s no room for digression. No room for passenger writing. Every word is doing a job. So pay attention. A short novel is an event, not a trip.’ Cynan Jones - writing for Peirene, 2016.

Author Ian McEwan believes the novella is the superior literary form to the novel. (2012) ‘If I could write the perfect novella I would die happy.’ McEwan believes that brevity appeals to readers, because ‘you can hold the whole thing structurally in your mind at once.’

A novella is Italian for a ‘little novelty.’ One Thousand and One Nights, written in the 10th century, is one of the earliest examples of serialised novellas. Chaucer’s Canterbury Tales (1386-1400) could also be considered a type of novella but the novella really came into its own in the 19th and early 20th century - think of Conrad’s Heart of Darkness, Kafka’s Metamorphosis, Thomas Mann’s Death in Venice, Henry James, The Turn of the Screw, Ernest Hemmingway’s The Old Man and the Sea, Kate Chopin’s The Awakening, Jean Rhys’s Wide Sargasso Sea – to name but a few.

More recent classics include the Catalan, Stone in a Landslide by Maria Barbal - a miracle of compression. In a mere 120 pages we get the complete life story of an old woman, covering the entire 20th century.

Some of my favourite novellas are The Dig by Cynan Jones, Veronique Olmi’s Beside the Sea, A Meal in Winter by Hubert Mingarelli, Khirbet Khizeh by S. Yizhar,  and Train Dreams by Denis Johnson. Wioletta Grieg’s book, Swallowing Mercury might also be described as a novella – or perhaps it’s a memoir? But that’s the fun of these books. They often defy categories.  The novella has ambivalence built into its very DNA.

Bronwen is currently attempting to write a novella and recently completed a novella-in-flash about her childhood which was long-listed for the Bath Novella in Flash award earlier this year.  Her book of flash fiction, Not Here, Not Us – stories of Syria, was published in 2018. She is also the author of two novels, A Bird in the House, and Here Casts No Shadow. 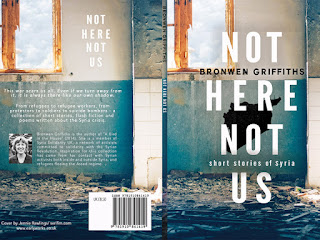 
With each book sold of Not Here, Not Us, Women Now - a charity which helps women in Syria and surrounding countries - receives a £1 donation
Authors Electric Blog Indie writing self-publishing

Katherine Roberts said…
I agree there are some brilliant novellas out there, and I also think novellas have had a bit of a revival with ebooks and POD... it doesn't matter how wide the spine is with a digital book, since it doesn't need shelf presence.
21 July 2018 at 17:28