Life’s parallel tracks fascinate me. Or, at least, human beings’ ability to navigate them. They are a reflection of that dual personality propensity that lies within us all. My favourite classic writer - and fellow Scot - Robert Louis Stevenson, was also fascinated: his famous novel, Dr. Jekyll and Mr. Hyde, is only the ultimate expression of it. It can be traced in lots of his other novels too. I had a very real life- experience of this last month. 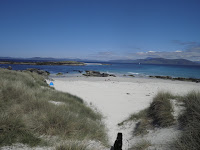 Picture this: I am getting ready for my annual fortnight in The Hebrides and I trawl round the bookshops in the area (by email) and ask if they want any more copies of my Hebridean novel, The Ghost of Erraid, for the tourist season, which is everyone's bread and butter there. I get several re-orders, gratifyingly. And I get an invitation from one shop to be their featured author at one of their ‘Book Chat” events. Brilliant!

Now picture this: when my mother died suddenly at the age of fifty, I was twenty-four and had just given birth the previous week to my first baby. My only other sibling, my sister, had a two-year-old and was just pregnant with her second baby. My father was utterly devastated, incoherent with shock and grief. My sister and I somehow got him and ourselves through the funeral, but the subsequent weeks and months were dreadful, as we tried to be a support to our father, deal with the aftermath of our mother’s death and cope with our own babies and pregnancies. (I was pregnant with my second within four months). We were a family in crisis and we needed help.

It came in the shape of a lovely lady called Diné (short for Adeline). She gave my father a future when he had thought he had none; she gave my sister and I respite from feeling responsible for our father and the chance to begin to deal with our own shock and grief. Perhaps, best of all, she gave our children a grandmother. I used to tease her that she did it right, skipping the hard work of being a parent and going straight to the best bit of becoming a grandparent. But, in all seriousness, she took on the challenge bravely and triumphed. She became a lovely and much-loved grandma to my three girls and my sisters’ two boys.

But now she had reached the extremely old age of ninety-six and we knew, each time we visited her, that the end was near. She was in pain and miserably confused - I prayed for her release. And it came just three days before we were due to set off for The Hebrides. The funeral- - and there could be no question of us not going - was right in the middle of our fortnight away, the day before my ‘Book Chat’ event. It is a journey of about one hundred and fifty miles each way, a third of it on a single-track, passing-places road, and it involves two ferry crossings. It meant that I came off the ferry back onto our holiday island (Iona) half an hour before I was due at the book shop.

My head was full of memories and mourning, of thankfulness that my lovely Diné was no longer in pain, and sadness that I would never see her sweet, mischievous smile again. But I had to do a 360-degrees turn and - in the ten minutes I had to race up to our holiday home, throw on some ‘slap’, clean my teeth, and squirt some perfume - I had to become Fran Brady, author, and put aside ‘Frances, dear’, the bereaved stepdaughter. 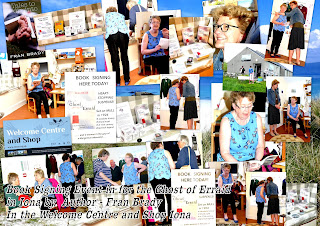 Somehow, I did it. As you do. Life runs sometimes on not just parallel tracks but on two mainline railways, going to very different places at very different rates. I did my talk, laughed and joked, answered questions, read from my novel, signed books and posed for pictures.

But, in my head, I had an old pop song playing: She was once, twice, three times a lady … and I loved her.

PS: Some of you may have noticed that I failed totally to do my blog last month Apologies. I had a lot on my mind!!

Fran is a Scottish author with several published novels and lots of other's 'stuff' besides.
See www.franbrady.com

Griselda Heppel said…
What a moving, heartening post. I’m catching up (capricious internet availability), hence this belated comment but I loved your tribute to this wonderful person who gathered up your whole family at just the right moment and proved herself a devoted step grandmother. Only 2 of my 4 children remember my father, meaning my lovely stepfather was, as far as they were concerned, as much a grandfather to them as if he had been by blood. It’s the relationship that matters, and the genuine warmth stepgrandparents can feel towards this new generation that has come into their lives. You are amazing for managing your author booking with all those emotions churning inside you, not to mention the sheer exhaustion of all that travel! I hope you are now enjoying a thoroughly relaxing holiday.
8 July 2018 at 11:14