Perhaps I should have stepped back and thought, ‘You’re going to Russia for the World Cup for ten days in June. Is it really wise to publish a book just three weeks before that and arrange events to attend all through the summer – including every remaining weekend in June and July?’ If I had, I might have come to the conclusion that it wasn’t all that wise. And then add into the mix the serious illness of a close family member...

I had been planning this blog post to be all about my trip to Russia and my impressions of the country thirty-odd years after my last one – when it was still part of the Soviet Union, albeit already changing under glasnost and perestroika. And of course this time I was going during the biggest party on the planet – in the country that had inspired my love of football all those years ago....

Having to cancel the trip to Russia in order to be around to support my family, while a great disappointment, at least allowed more breathing space for planning the remaining events – even if I perhaps ended up watching more football than if I’d been travelling back and forth on trains through southern Russia between matches. But it has all still been rather busy.
First of all was the long drive south from my home in Yorkshire for the Barnet Medieval Festival in early June, where as well as taking a stall to sell my books, I’d been asked to give a short talk on King Richard III at the site of what was his first battle. 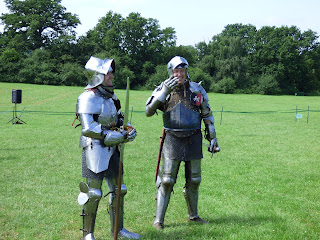 It was my first taste of a battle too (or at least its re-enactment). The reading I chose to accompany my talk was from perhaps rather late on in my books (about three-quarters of the way through the second one, The King’s Man), but it seemed appropriate to accompany a day of fluttering pennons, firing cannon and clashing armies with a description of the morning before a battle. 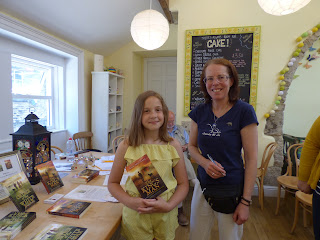 Then there was a local launch of The King’s Man at a café on Main Street in Haworth, mainly intended for friends and family, but also promoted to local schools. One result has been an invitation to visit a local primary school to chat to a Year 5 class about being a writer. Another event to cram in to this busy July!

Next up, two more medieval festivals, one hard upon the other – the Middleham Richard III Festival, in the castle that was his primary home in the north of England, and Tewkesbury festival – site of Richard’s second battle. Middleham was preceded by my first school visits – to present copies of my books at primary schools in Barnard Castle, County Durham. Very generously a local community group, the Northern Dales Richard III Group, had donated a copy of The Order of the White Boar for every Year 6 pupil in the town to celebrate King Richard’s strong links with the town. At Middleham itself, at an education day for local schools, further copies were donated – and this time presented by His Grace the King himself. 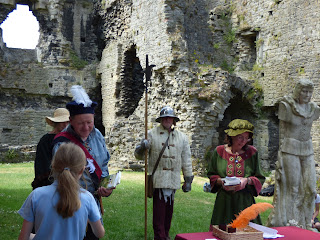 Middleham acts as something of a magnet for Ricardians (supporters of King Richard who believe he has been maligned over the centuries) – even, one might say, as a place of pilgrimage. It was certainly a place where my books received a very warm welcome – and not just from those children who were receiving free copies. It’s a marvellous feeling as a newbie author to have people – some of them already known from social media, some not –making a beeline for your stall and telling you how much they’ve enjoyed your book(s) and/or that they’ve come specially to buy them.

Tewkesbury is this coming weekend and, as the largest free festival of its kind in the UK, will be a different experience again. I’m told the beheadings behind the Abbey are not to be missed! Whether I’ll be able to spare the time from stall and more readings to witness them I have yet to find out.

In another few weeks, it will be the turn of the re-enactment weekend at Bosworth – King Richard’s final fateful battle – although this year, for the first time, apparently there will be a re-enactment with an ‘alternative ending’ in the morning. I’m all for alternative history –fiction based on ‘what ifs’. I was sorely tempted to head in that direction in my own books as the battle of Bosworth loomed closer – though soon reminded myself that the point of my books was to stick as close as possible to the actual history to bring that to young people who might otherwise only encounter Shakespeare’s twisted version. It will be intriguing to see how the re-enactment pans out.

More school and library visits are lined up over the coming months, but no more such major events, and not so close together. I think I’ll need a breather after the intensity of this summer. And at some point I have to start writing that third book – the one that readers keep asking me about – to my delight and, if truth be told, terror!
Will I do the same round of events next year? Perhaps some of them. People keep suggesting new ones too. Without a major football tournament next summer, I could probably fill every weekend with medieval festivals and similar events. And the following year? Well, my partner has promised me that we will start planning a replacement rail trip round Russia very soon...