Words and Music by Sandra Horn


There’s a slight state of panic here. I think I’m being repetitive. When I sent my last blog in, I was immediately haunted by the idea that I’d written a very similar one before – but short of trawling through them all to check, I couldn’t be sure. I need time to put them all in a file and read through them. Not a happy prospect! It must be done, though, or I’m in danger of plagiarising myself over and over again as I run out of new ideas. I’m still stuck in writers’ block, which doesn’t help at all.

Anyway, here goes: I know I’ve written about words, lovely words before, but this time I’m going for some new thoughts. I hope. I was once at a party and one of the other guests told me that she and her husband read poetry to each other in the evenings. ‘What a great idea!’I said, ‘I love poetry! It’s like music.’

She fixed me with a glassy stare, a mixture of extreme disapproval and alarm at my insane utterance, and said, firmly, ‘No.’ Then she went away to find a sensible person to talk to. I still find it odd that someone who purports to enjoy poetry can’t grasp its musical quality. There are millions of examples, here’s just one: ‘Lars Porsena of Clusium, by the nine gods he swore,’ is a spoken song -  isn’t it?  Or a march, perhaps? The rhythm of it cries out to be beaten on a drum.

Sometimes, of course, poets write consciously to a musical form, as in Belloc’s ‘Tarantella’ – 'Do you remember an inn, Miranda, do you remember an inn?’  And Edith Sitwell’s brilliant poems set by Walton  for Facade. She used the words for their inherent music rather than the sense they made  – they are in the rhythms of a fox trot, hornpipe, mazurka, waltz, etc.  – and polka: ‘Tra la la la – “See me dance the polka,”  Said Mr.Wagg like a bear, “With my top hat and my whiskers that – (Trala la la la) trap the fair.”’ It does make sense, but the fun of it is in the music.

And then there are words set to music . Sometimes the match is perfect: sweet Suffolk Owl; The Silver Swan, for example. On the other hand, it must be said that sometimes there’s a mismatch – Britten’s ‘The splendour falls on castle walls,’ makes me cringe (sorry, devotees) as it’s just too much for the gentle sentiment Tennyson was trying to convey. ‘Come into the garden, Maud,’ also loses its sexy, seductive power somehow when sung as a parlour ballad – and there are several settings of Housman’s A Shropshire Lad, too, where the subtle sense is lost to overblown music.

Sometimes it’s the borrowed words that set off a musical/poetic association. My poem ‘On the Ferry’ was inspired by a row of white boats by the shingle bank at Hengistbury Head: Sea Eagle, Sylph (from Paracelsus), Skugga (Faroese for cloud) and Seren Wen (Welsh for Evening Star). Playing with the order of them gave variations on a theme. Sometimes it's an image: 'the dandelion clocks are all blown,' 'the last moon of winter sank low.' (both from prose poems).

But what I really wanted to write about is the inherent music in words, whether they are consciously made into poetry or come just as they are. When I’m in, say, Newcastle or Glasgow, I have to tune my ears in before I can understand what people are saying. They ‘sing’ a different tune from the southern one I hear every day.

I have no relevant images for this blog, so here are some random lilies - the ones the slugs and lily beetles didn't get. 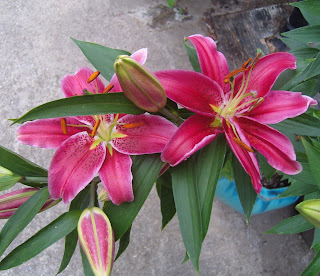 Susan Price said…
I always enjoy your blogs, Sandra -- perhaps because I usually agree with you! How could anyone think that poetry and music are entirely different things? What about the dictum that poetry is rythym, not rhyme? (And I wish more would-be poets would grasp that.)
20 July 2018 at 09:20

Bill Kirton said…
Sometime, way back, one of my blogs was about the importance of rhythm in prose as well as poetry, Sandra, so we're obviously in agreement. It's an oft-overlooked essential. (And I think you were well rid of the lady with the poetry blind spot.)
20 July 2018 at 11:10

Umberto Tosi said…
I hear the music, and, having grown up in a musical family, also endeavor to infuse my prose with it, though with uneven success. It's not easy, but satisfying. As for deja vu, I get that all over again and again too. It's hard to track what we've written, even when neatly filed. Don't worry, though, most of us - me included - have lousy memories. :D
20 July 2018 at 16:45

Enid Richemont said…
Oh the music of words. I remember being put off literary analysis in sixth form by the teacher insisting we needed to know what the poet actually MEANT. No, I didn't - I just enjoyed the music.
21 July 2018 at 12:04