The More We Know... Umberto Tosi 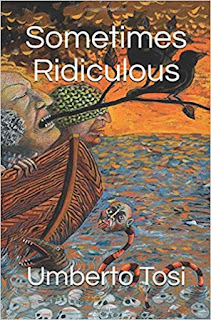 ... the more we know we don't know. You can be just lying in your bed, watching a mindless video and an epiphany finds you. You don't have to go climb mountains or anything. You don't even have to want one, or anything.

For example, whilst recuperating from a nasty bug over Christmas - no way to spend the holidays - I was was half watching a You Tube video of what was supposed to be a romantic mountain train journey around Switzerland. I had the sound turned off. Watching trains lulls me to sleep somehow. It takes me back to being a little kid curled up in the swaying, top bunk of my parents' compartment on our annual winter cross-country rail journey from Los Angeles to Boston, Massachusetts back in the 1940s. The top bunks on the old Pullman cars used to have these little oval windows up where the carriage wall curved into the ceiling. I could slide a little plastic shade open and peek out onto a moonlit winter landscape with myriad stars above. It was like the train was travelling through space - and certainly a night wilderness. Once in a while I could catch sight of the locomotive's gyrating head lamp up ahead as it illuminated clouds of steam billowing out its stack.

Back in the present, I was about to drop off to sleep as I imagined myself on a train, when the video cut to early, 1900s grainy black-and-white film footage of mustachioed workmen wielding pickaxes. They were carving a tunnel through an Alp, presumably one that the modern train was about to enter with ease. The workmen looked heroic as they blasted granite blocks, and barely escaping once they lit their fuses. In one scene there had been an accident, and stoic-faced, grimy workmen were shown wheeling out the bloody injured and dead in one of the hopper cars. This was followed by scenes of triumphant completion, with bearded dignitaries in top hats dedicating the tunnel, now still in everyday use more than 100 years later. Cut to the the tunnel entrance - an impressive affair arching gracefully against the side of a mountain, with an elegant beaux arts granite facade.

I sat up. A thing of beauty, wrote John Keats, and so forth... Or for a long time anyway. When it comes to humanity's monumental creations - as opposed to those in nature, however - we generally only notice what is pleasing to the eye, and overlook deeper meanings that give them their power over our emotions. Namely, they embody what went into creating them and the manifold experiences of people who made use of them. Foremost among them are the imagination, knowledge, courage and struggle it took to conceive and build these landmarks in the first place, whether aesthetic or utilitarian, or both. I realized that I had learned this unintentionally from a theme that had emerged, purely by accident, in the writing of "The Flying Dutchman of the Internet,"  a short story that appeared in Catamaran Literary Reader about three years ago and now appears in my new paperback (and epub) short story collection, Sometimes Ridiculous.

I based the story on a notion I had about ten years ago, after several years of on-and-off dates and friendships via the free, online dating service OK Cupid. The main character, I thought, could be a chap of a certain age who perceives that he has become a sort of Flying Dutchman of the Internet, cursed to sail the Web eternally making port occasionally, but never able to drop anchor for good. Another protagonist appeared when I finally attempted to develop this idea into a narrative - a woman wrestling with tragedy and a curse of her own, and the place of their encounter, the maritime port I know best - San Francisco.

I didn't reckon that the Golden Gate Bridge would become a third and co-equal protagonist as this particular star-crossed love story unfolded. I put the bridge in for effect, because when you live in San Francisco, it's always there, in sight, or in mind, or both. But, I didn't get this until I saw the You Tube video of those 1900-era tunnel blasters, that famous, graceful, international orange suspension bridge image is much more than a postcard icon. I won't go into spoiler details, but without intending to, I populated the bridge with all those who have lived and died on it - the workers, the suicides, tourists and lovers - since it opened in 1937 (only a few weeks after I was born, by the way, giving the span a special significance to me.)

Maybe this sudden realization about my own story wasn't so much an epiphany as an insight, a broader, more dimensional way of looking at things, coupled with a humbling acknowledgment that there is a lot I don't know about the process of storytelling. The storyteller isn't me. I'm just a messenger doing my best to jot it down right. The storyteller has much to teach me, if I can catch it, but even if I can't understand a tale fully, it can be more than I think it is.

Umberto Tosi is the author of Sometimes Ridiculous, Ophelia Rising, Milagro on 34th Street and Our Own Kind. His short stories have been published in Catamaran Literary Reader and Chicago Quarterly Review where he is a contributing editor. He was contributing writer to Forbes, covering the Silicon Valley 1995-2004. Prior to that, he was an editor and staff writer for the Los Angeles Times and its Sunday magazine. He was also the editor of San Francisco Magazine and other regionals He has written more than 300 articles for newspapers and magazines, online and in print. He joined Authors Electric in May 2015 and has contributed to several of its anthologies, including Another Flash in the Pen and One More Flash in the Pen. He has four grown children - Alicia Sammons, Kara Towe, Cristina Sheppard and Zoë Tosi - and resides in Chicago. (He can be reached at Umberto3000@gmail.com)
Posted by Umberto Tosi at 00:00

Umberto, this post brought back the magic of the railways, and it was enchanting to imagine a boy on the top bunk, gazing at the moonlit landscape. I must get your latest book soon, which I am sure will be very very far from anything ridiculous. Happy New Year and more power to your writing!

I spent yesterday flying home from a New Year visit to sons in New York, so have only just read this, and it brought me instantly back to my childhood holidays, taking the overnight train from Stuttgart to Paris, then changing for Calais and Dover. That feeling of being suspended in a cocoon, rocking through the night - just magical. Half-awake in darkness, I couldn't always tell which way the train was going and I still try to recreate that feeling when asleep on a train, just to see if it works. Flying is more common nowadays and, generally, quicker, but it doesn't have the same romance. Thanks for this delightful, evocative post.

Oh yes! I remember watching hares in the fields in the dusk through a train window (the sleeper from Scotland) as night fell. Magical. Thank you for this, Umberto! Sometimes Ridiculous will be my next purchase - it sounds intriguing!

Sorry this comment is a bit late - I am just catching up on my blog reading after having to go back to work during the week.
I too found the idea of the winter journey from coast to coast very evocative. This was a complete different scenario of course but it reminded me of one of my first train journeys in America, from Chicago to Cincinnati, when there was a huge thunderstorm somewhere en route and I looked out the window to see lightning flashing quite scarily across the sky, apparently almost overhead. I love train travel and have travelled by train in America a couple more times and also from Edinburgh to Helsinki by train and ferry, and from Paris to Barcelona and back. I don't think we are the only ones, to judge by all the train and railway programmes we get on tv now.