This list could not come at a better time for self-publishers. It seems that every time self-published authors begin to gain new grounds in respect, something happens to undercut those gains. Just last month, for example, The Georgia Writers Association ended a long tradition of allowing self-published authors to be nominated for their Georgia Author of the Year Award. This is a curious decision considering a goodly portion of the Association membership (though clearly not the board of directors) are indie authors. This decision is also ironic and sad considering that seventeen years ago, the Association received accolades for being so inclusive of indie authors. 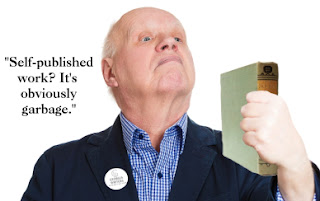 I find this particularly disheartening considering that my first published book, a collection of short fiction, was self-published, and its being nominated for the GAYA was the high point of my experience with that book. Back then, if memory serves, you could not nominate your own self-published book, so this meant someone thought enough of it to put it up for consideration.

Anyway, as disappointed as I am in the Association, this development serves to underscore how important it is to highlight good self-published work when it appears.

Clearly no one in charge is going to. 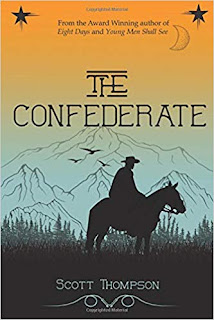 Scott Thompson does not normally self-publish. He is the author of two previous novels that were, however, independently published by small presses: Young Men Shall See (TAG Publishing) and Eight Days (French Press Bookworks). The Confederate, though, is a bit out of Thompson's normal genre, so he decided to publish it himself at his publisher's suggestion.

The Confederate is an impressive Western that hearkens back to the early dime novels of the 1890's by writers such as Ned Buntline and Prentiss Ingraham and the early twentieth century pulp Westerns of Zane Grey. Indeed the writing style itself is very close to Grey's, short, simple sentences that appeal to any reading level, but like Grey's work, this simplicity masks deceptively modern themes. While the writing may feel anachronistically simple and plain for a modern audience, Thompson skillfully weaves in a surprisingly modern viewpoint.

The story tells of ex-Confederate officer Robert Ambrose, who returns home from the Civil War disillusioned as to the War's legitimacy and the nobility of its cause to find his fiancee engaged to another man and his former life in shambles. Turning his back on the past, Ambrose heads to the Colorado territory to forge a new life in the untamed West. Throughout his journey, Ambrose comes to question not only his own morality, but the blind assumptions that led him to take up arms against his fellow Americans.

In Ambrose, Thompson gives us a new kind of Confederate hero: not the cryptoracist veteran who bemoans the tragedy of the South's "Lost Cause," but a man who, while proud of the service he gave his homeland, finds himself questioning the political underpinnings that made such service necessary. Ambrose shows us a man who learns to accept others on the basis of their actions rather than the color of their skin. In fact, Thompson's treatment of race is one of the aspects of the novel I like the most: Unlike the traditional Westerns Thompson emulates, we are not given a portrait of white culture "taming" the savages and building a civilization, nor are we given, as in many revisionist Westerns of the 1960's and 1970's, a representation of ethnic minorities as pure and noble savages that teach the barbaric white man to appreciate nature and rise above his prejudices. Instead, Thompson populates his town of Argentine, Colorado, with a diverse cast of characters whose morality has nothing to do with race.

Another aspect I really enjoyed was the pacing of both Ambrose's primary plot and the subplot of Narcissa, Ambrose's lost love, and her journey to the West in search of him. Not only does Thompson pace it so well that when the paths inevitably cross, it makes perfect sense, but each step of Narcissa's personal journey parallels a similar step made by Ambrose in his. Finally, I enjoyed that Thompson undermines traditional Westerns by not making it necessary for Narcissa to be saved by Ambrose while he also undermines revisionist Western tropes by making it unnecessary for Narcissa to rescue Ambrose either. Both plots, while necessarily intertwined, allow their respective protagonists to solve their own dilemmas on their own, making for stronger characters overall.

In short, do not be deceived by Thompson's simple stylistic choices. The Confederate is a far more complex story than it appears, and much more intriguing. I could not put it down. If Zane Grey wrote Larry McMurtry's reinterpretation of Forrest Carter's The Outlaw Josey Wales, it might well read very much like Scott Thompson's The Confederate.
Eight Days Georgia Writers Association Scott Thompson self-publishing The Confederate Westerns Young Men Shall See

Griselda Heppel said…
You are doing a terrific job of championing indie publishing and I'm much taken by the sound of The Confederate - not the kind of book I usually read at all! I particularly like your point about the two main characters solving their own dilemmas rather than having to rescue/be rescued by each other; this should definitely happen more in literature. And how disappointing, that decision by the Georgia Writers Association - I wonder why? Have they been overwhelmed by an explosion of high quality self-published authors? Oh the irony...
I've let my membership of the Society of Children's Book Writers and Illustrators lapse, not because it isn't a great organisation in general (begun in the US, now world wide) but because none of its many opportunities of prizes, promotions, being entered on book lists, book launches etc are open to self-published authors. I think it is sadly behind the times.
24 January 2019 at 18:33